One more marmalade for the January challenge. This small-ish batch of lemon lime marmalade is made over the course of three days. That better allows you to fit your preserving into your busy life! 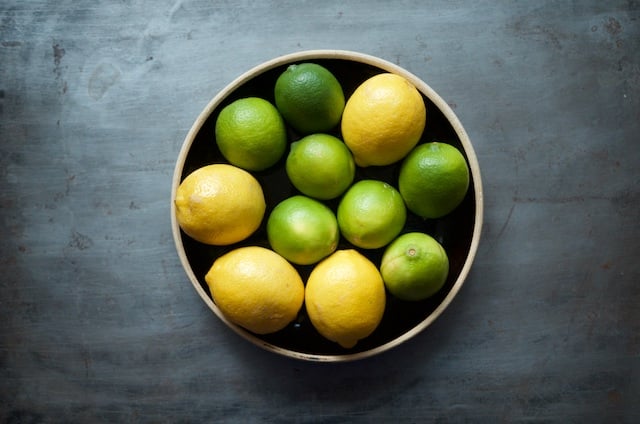 We’re beginning to wrap up our month of marmalades in the Food in Jars Mastery Challenge and I figured the best way to celebrate was with more marmalade! Lemon lime marmalade, to be precise. This is a batch I made about a week ago, over the course of three days (because marmalades are flexible like that). 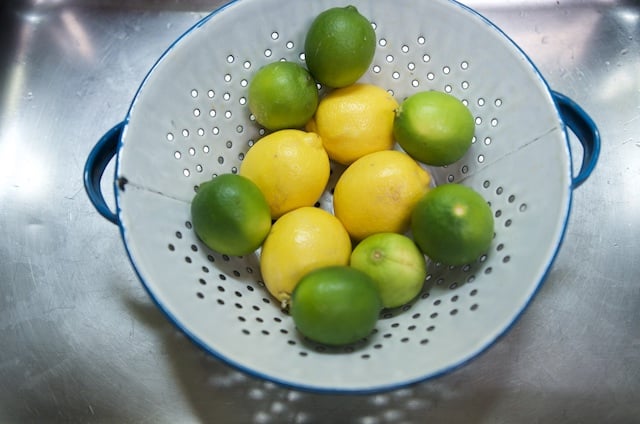 For this batch, I picked up two pounds of organic lemons and limes from my neighborhood Trader Joe’s. There was a lot of talk about sourcing fruit for this month, and part of my goal with this recipe is to show that you don’t have to go crazy or spend a ton of money to get good fruit for preserving. I don’t remember how much I paid for these lemons and limes, but it was well south of $5. 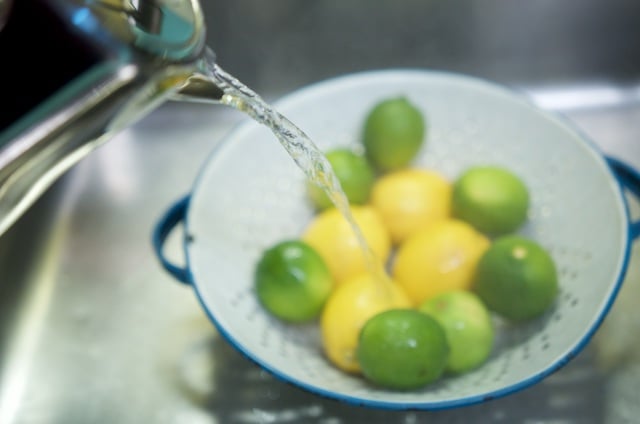 Because grocery store citrus is often waxed to help retain moisture and freshness, I always give it a rinse with boiling water if I plan on using the zest or rind. I put a colander in the sink, fill it up with the fruit, bring a kettle to a boil, and then give the fruit a scalding bath. This helps remove any surface wax and gives you a aromatic steam facial, to boot. 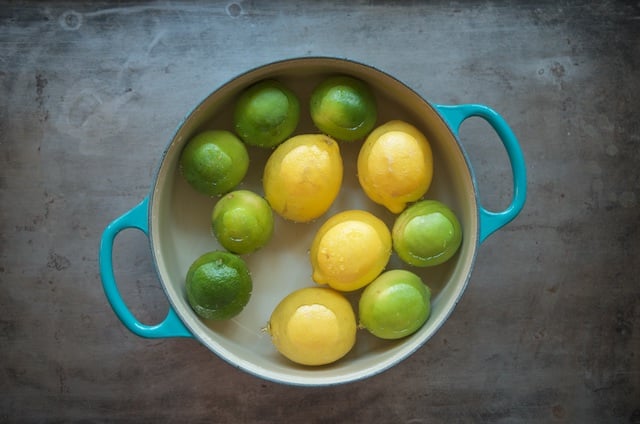 After rinsing the fruit, I arranged it in a pan that was wide enough to hold it in a single layer. Filled with twice as much filtered water as I needed for the recipe (to ensure that there would be enough after evaporation), it went on the stove and simmered for about 45 minutes, until the rinds could easily be pierced with a fork. 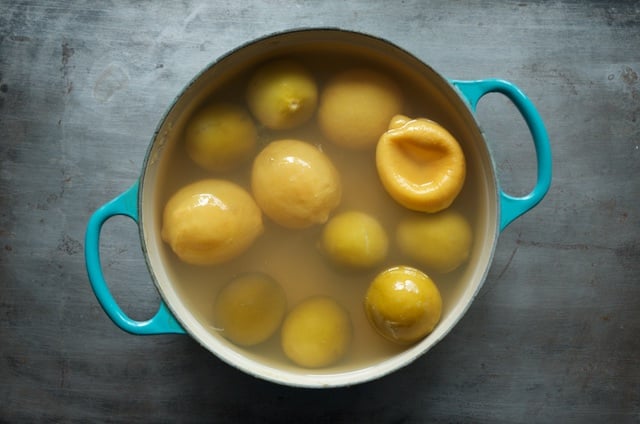 Once the fruit was cooked through, I turned off the heat and let it sit until cool. That was the end of the day one prep. I covered the pan and let it hang out on the back of the stove until the next day. 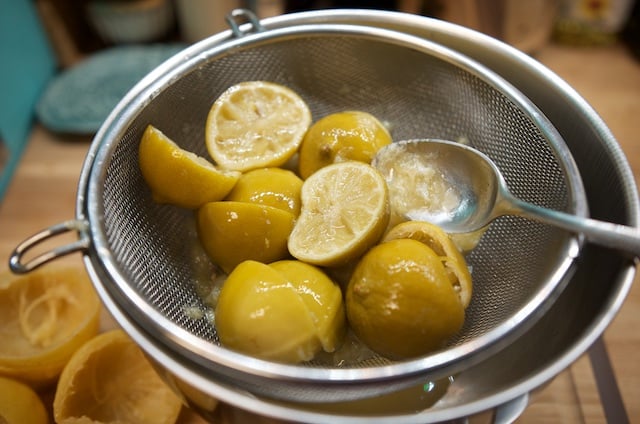 On day two, I pulled the fruit out of the pot and set it on a cutting board with a carved groove to catch any juices. I measured out four cups of cooking water to use in the marmalade and set to work breaking down the citrus. I positioned a fine mesh sieve over a bowl. With a piece of citrus in my left hand and a paring knife in the right, I cut the fruit open over that sieve.

Once about half the fruit was cut open, I scraped all the flesh (membranes and seeds included, but not the pith) into the sieve. I set the rind aside for a moment. Then I used the sieve to work through the pulp in order to remove the seeds. Once I was certain that all the seeds were removed, I poured the pulp into the bowl below. This process was repeated until all the deseeded pulp was in the bowl. 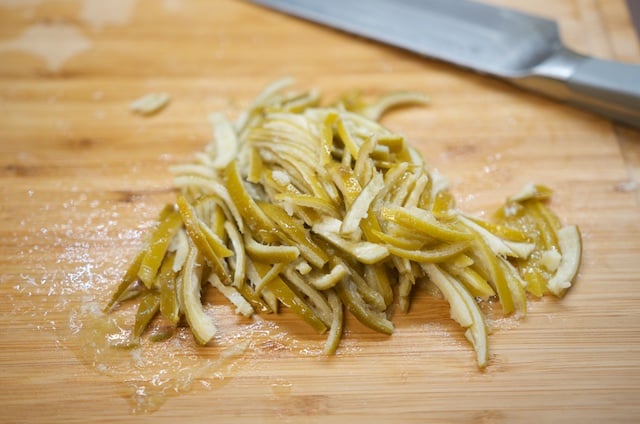 Then I chopped the rinds into strips. I like to take a couple empty rind halves, cut them in halves or quarters, make a neat stack, and chop through them. This keeps the task from becoming too tedious (but there’s always a little tedium in making marmalade. It’s just part of the gig). 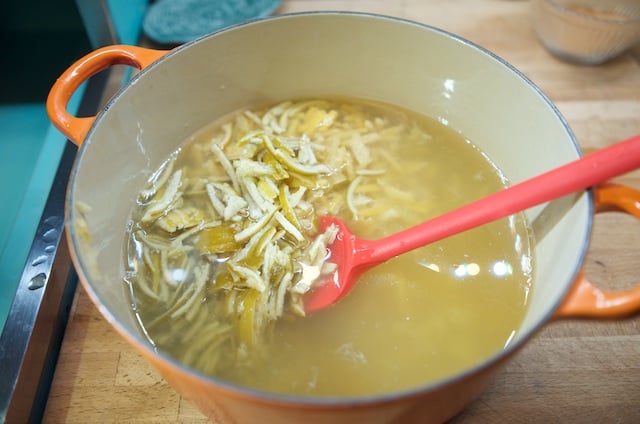 I put a cover on the pot and slid it to the back of the stove to wait until morning. 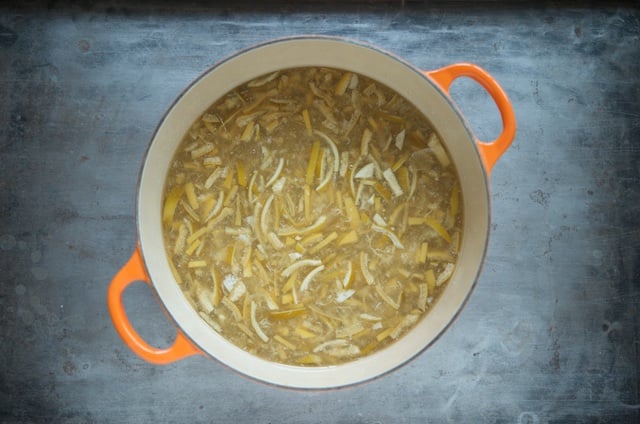 On the morning of day three of the lemon lime marmalade, I took a picture of the prepared fruit in nice light and then got to cooking. I placed the pot on the stove, set the burner to high, and brought it to a boil. Once it started to roll, it boiled steadily for 35 minutes before it started nearing the set point.

I stirred occasionally at the start of cooking and regularly towards the end. Around minute 40, it reached 220 degrees F and was able to maintain that temperature even after being stirred. I also used the saucer test and looked at how the droplets were setting up on the spatula before calling it done. 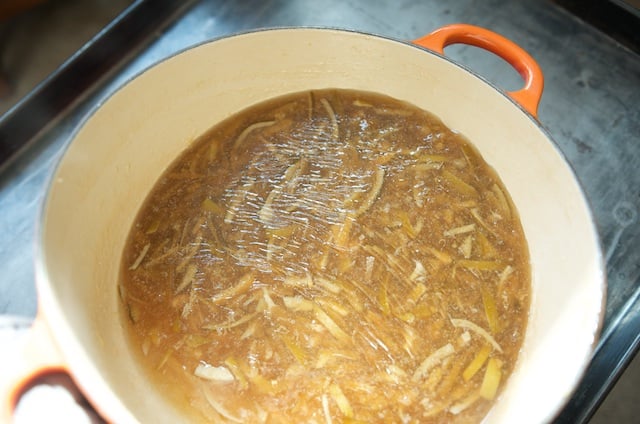 This batch was so eager to set up that it started to do it in the pot while I was taking these pictures (and truly, when I take pictures of a finished preserve in the pot, it only adds a couple minutes to the workflow. This pot wasn’t off the stove long). But you can see that as I tilted the pot a little, the surface wrinkled in the same manner we look for when using the plate/saucer test to check for set. Set mission accomplished. 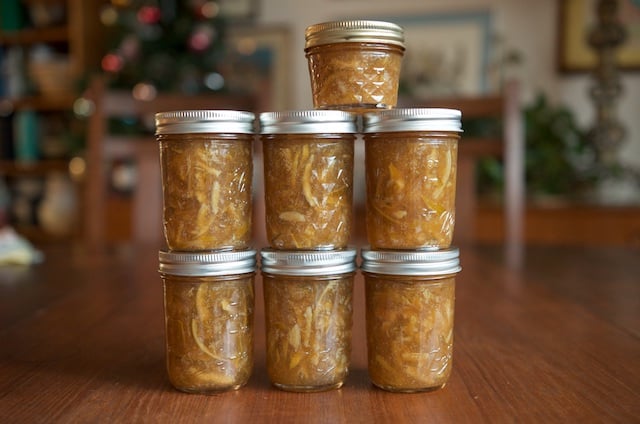 This batch yielded six half pints and one quarter pint. It’s pleasingly bitter and bracing. I made a batch of lemon chicken the other night and used a few spoonfuls to lend flavor to the quick-cooking dish. Easy and delicious! 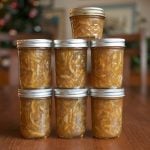