CSA Cooking: A Trio of Salads and Dips 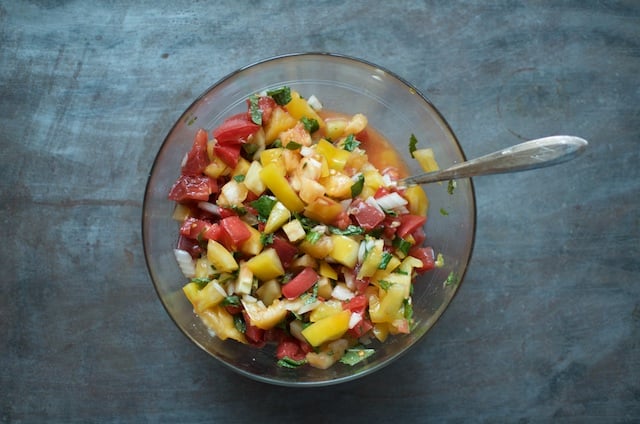 This month’s Philly Foodworks share arrived during an intensely busy week. My mom was in town, we were prepping for the family wedding, and soon after, I was on my way out of town. I did my best to make quick work of the most perishable things and these three little dishes were the results.

First up is this tomato mint salad. We typically pair tomatoes with basil, but they go awfully well with mint as too. This particular salad contained one large heirloom tomato, half a finely chopped white onion, and a generous fistful of torn mint. The dressing was a big pinch of kosher salt, four turns of the pepper grinder, and a few lashings of olive oil (about two tablespoons, if I had to guess). Add some homemade croutons and it would be a tasty panzanella. 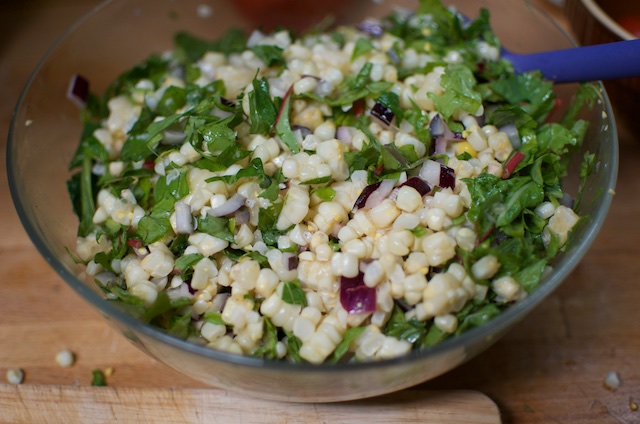 Next up is this quick corn salad. It consisted of six lightly cooked ears of corn (five minutes in a pot with an inch of simmering water). After a rinse of cold water, I hacked the kernels off the cob (saving them for stock), and combined them with half a minced red onion (you could also use the other half of the white one from the tomato salad above), and a couple handfuls of roughly chopped mustard greens.

The dressing was 2 tablespoons olive oil, 3 tablespoons champagne vinegar, a teaspoon of kosher salt, and a whole bunch of freshly ground black pepper.

Last one is a roasted eggplant dip. Preheat your oven to 400 degrees F and line a baking dish with parchment. Cut a big eggplant in half, drizzle it with a little olive oil and throw five or six garlic cloves (still in their wrappers) in the pan as well. Roast the eggplant, cut side up, until it is brown (maybe 15 to 20 minutes). When the eggplant is tender, it is done.

Let the roasted halves cool until you are able to handle them. Scoop out the flesh and put it in a bowl or container. Squeeze the garlic out of their peels and add them to the eggplant. Add 1 teaspoon of olive oil, the juice of one lemon, and a pinch of salt. For a chunky dip, mash it with a fork. For something smoother, zap it with an immersion blender (that’s what I did). 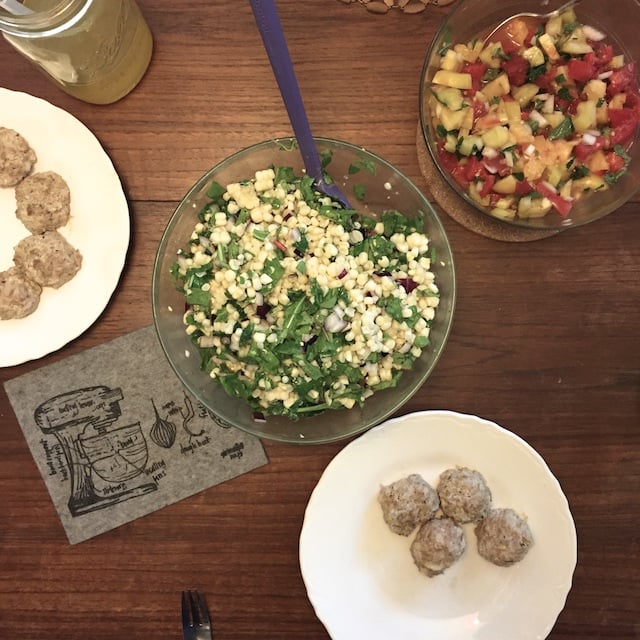 We actually ate all three of these dishes together with Joy’s chicken ricotta meatballs for dinner, but any one would make a nice addition to a meal.

7 thoughts on "CSA Cooking: A Trio of Salads and Dips"