For most of the last three weeks, my left crisper drawer has been almost entirely occupied by plums. I’ve slowly working my way through this bounty, cooking them into jam, using them in my various demonstrations, and relying on my slow cooker to turn them into butter (two batches, thus far). The bottom of the drawer is finally in sight and I think the remaining plums will become a batch of cardamom-spiked jam.

I’ve written a great deal over the years about using a slow cooker to make fruit butters, so if you’re a long-time reader, this post might feel oddly familiar. However, I’m of the belief that anything useful and good can always bear repeating, and so, I push on and offer you another slow cooker.

The plums I most like to use for butter are late season Italian plums. Bred for cooking and drying (they are also known as Italian prunes), they are typically the last variety of stonefruit available before the weather slips into fall. They can be slightly bitter or tannic when eaten raw, but once heated or dried, trade those unpleasant elements for a lush texture and natural sweetness.

To make plum butter, I fill my biggest colander, give the plums a good rinse, and then stand at the sink for a time to cut the fruit into halves and remove the pits. I find that for my 6 quart slow cooker, my starting weight is typically between 7 and 8 pounds.

Then I heap those plum halves in the cooker, add a few tablespoons of water to prevent scorching in the early stages of cooking, set the lid in place, and cook on high for somewhere between 2 and 4 hours. This first stage of cooking is designed to soften the plums enough so that they can easily be pureed with an immersion blender.

Once they’re soft, I apply my immersion blender until the plums have been transformed into a puree. Then I balance a wooden chopstick across the lip of the slow cooker crock, and rest the lid on top of it, so that the steam can easily vent. Finally, I turn the cooker on low and proceed to cook the plum puree down over the course of the next 6 to 10 hours (your mileage will always vary here).

I try to give the cooking butter a good stir every couple of hours, to ensure that the top doesn’t dry out while the underside burns.

Once the plum puree has reduced down to a dense, thick, spreadable butter, it is done. I like to scrape it out into a medium saucepan for the final pureeing, because if you’ve done your work well, there won’t be enough depth in the slow cooker for an immersion blender to work well.

When the butter is smooth from the second application of the immersion blender, I put it on the stove over low heat, and add the sweetener and spices. Stir constantly, until the butter is hot and the sweetener is fully combined. In the case of this batch, I sweetened with brown sugar, thinking that it’s molasses-y flavor would go well with the plums. I also added 1 teaspoon of cinnamon, 1/2 teaspoon of ground nutmeg, and a splash of lemon juice for balance.

As with all fruit butters, you can sweeten this one to your taste. You could reduce the amount of sugar, use regular granulated sugar, add a bit of honey instead, or even leave it entirely unsweetened (though I find that even a small amount of sugar helps balance the fruit and also improves shelf life).

To preserve, funnel the finished butter into jars (I like half pints for this one, as a little goes a long way), leaving a generous 1/2 inch of headspace. Wipe the rims, apply the lids and rings, and process in boiling water bath canner for 20 minutes. I always process fruit butters for longer than jam, because their increased density makes it harder for the heat of the canner to penetrate to the center of the jar. A longer processing time helps combat that. 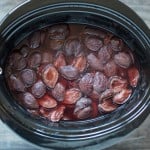 As with all fruit butters, the finished yield of the batch you make in your own kitchen will naturally vary from my yield. This one could swing from 4 to 7 half pints, so make sure you have a couple extra jars before diving into the canning portion, just to be sure.