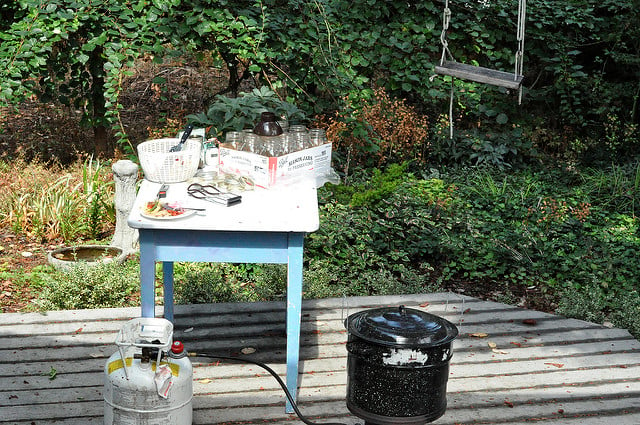 A couple of months ago, based solely on a handful of tweets and a couple of emails, I logged onto Travelocity and bought a plane ticket to Seattle in order to spend some time with a number of people upon whom I’d never before laid eyes. This is a scenario that might give lots of folks pause, but I felt completely at ease, because I was going to be part of the Canvolution.

I landed late on Friday night and a friend of more than ten years picked me up. She took me home with her and tucked me into a wonderfully cushy, comfortable bed. The next morning, she dropped me off in a KFC parking lot, across from the U District farmers market, where I met up with Tea and ogled produce that I could not have (I did buy a wreath of garlic to bring home). The rest of the day went by in a blur of ferry rides, more farmers market shopping (where I ate two incredible figs) and lots and lots of canning, feasting and laughter.

Now, looking back on the hours I spent last weekend with Tea, Viv, Shauna, Laura, Kim, Kimberly, Jeanne and others, I am so totally grateful and delighted that I bought a plane ticket on impulsive.

The only problem I had with my trip out to Seattle was the fact that I couldn’t really bring any of the food we made back with me (I didn’t want to take the risk that the TSA would categorize my homemade jam as a liquid and confiscate it). I did leave the canning party with a couple of jars, but I left them with my parents to bring when the come out for the wedding in a few weeks. So, when I got back home, I was jonesing for a canning project or two. So I canned plums in a honey syrup and made raspberry jam. 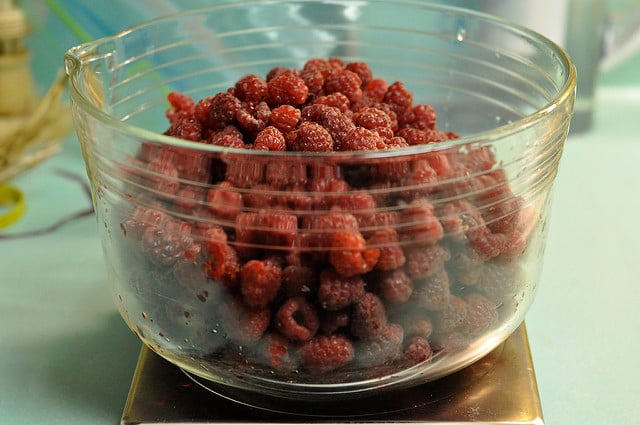 This was actually the first batch of raspberry jam I’ve ever made. I’ve always looked at raspberries as being too precious to turn into jam. I believe they are far better eaten out of hand, until your fingers are stained bright red and your belly aches. However, the raspberries were so abundant in the field that I made myself half-sick from overindulgence before I even got home. I couldn’t bear the idea of eating another berry, but the 2 1/2 pounds needed to be used. So jam it was.

I made this batch using weight measures as opposed to cups, because my scale was on the counter and it seemed easier. If you don’t have a scale, I’m under the impression I used approximately 8 cups of fairly well-packed berries. Additionally, unlike my blackberry jam, I did not seed this batch. I look at the seeds in raspberry jam as being part of its charm so I left them in. However, if you’re a seed hater, feel free to seed (check out the instructions in the blackberry jam post). 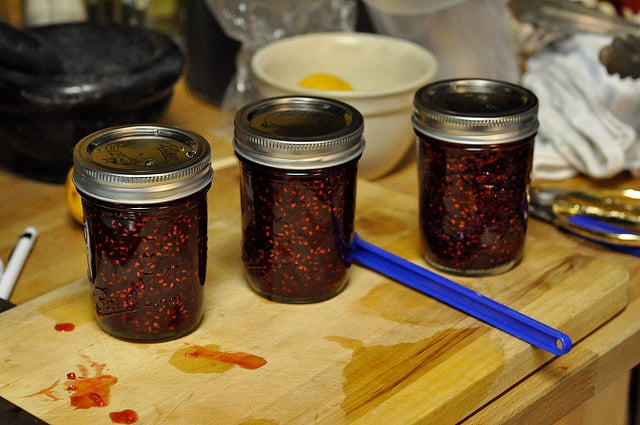 And, since I like to share, I have one half pint of this amazing, jewel-like jam to giveaway. Leave a comment before Tuesday, September 8th at 11:59 p.m. 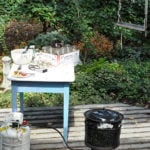