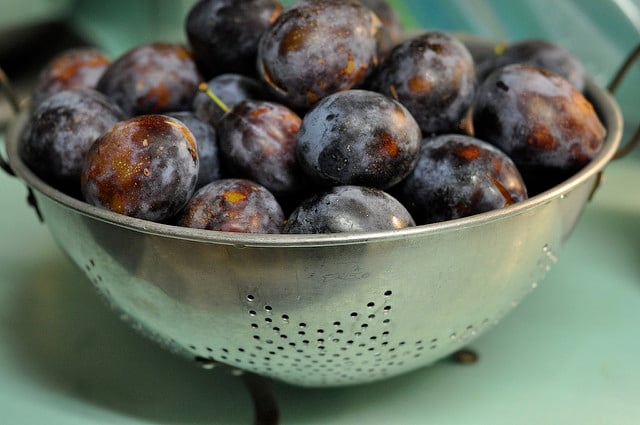 I had such a wonderful time over the weekend in Seattle. I met so many amazing people, reunited with a dear old friend, taught a really fun canning class and saw my parents for the first time in nearly nine months. I have bunches of pictures from the weekend, and so expect a post in the next couple of days that will feature those photos, along with my thoughts about the first Canning Across American weekend (preview: it was a rousing success and I can’t wait for next year).

Before I start talking about plums, there’s a bit of giveaway business to wrap up. The blackberry jam goes to lucky number 13, which is the comment left by Linus (who is a web developer and pickle maker – nice combo). He also seems to be Philly-based, which means that I get to skip the post office this time around and see if I can’t hand deliver this particular jar.

Last week, before I left town, I made tentative plans to meet up with the Philadelphia half of Doris and Jilly Cook to take a Mood’s Farm field trip just a couple of hours after I returned from the trip. My parents thought this plan crazy, assuming I’d need the rest of the day to recover from the red-eye flight. Thanks to my exhaustion and an innate ability to sleep just about anywhere, I landed feeling fairly refreshed and ready to take on an afternoon of fruit picking. 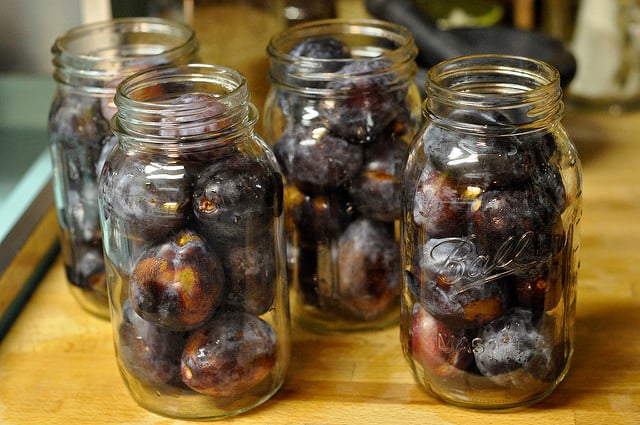 The sheer abundance at the farmstand merely hinted at the bounty we’d encounter in the fields. The peach trees were hanging heavy with fruit and the raspberry canes were covered in the largest, most delicious berries I’ve met in about twenty years. We had plans to pick blackberries as well, but mid-picking decided that our containers would be better used for the raspberries.

When we headed back to the city, the station wagon carried nearly 100 pounds of fruits and vegetables. My personal haul included 2 1/2 pounds of raspberries (at $3.75 a pound, they were by far the most expensive item I’ve ever gotten at Mood’s), nearly 20 pounds of rosy peaches, two quarts of Gala apples (those are just for eating, I’ll get some fresh Granny Smith’s later in the season for apple sauce and butter) and four quarts each of Bartlett pears (for butter), Seckel pears (for canning whole and pickling) and Italian plums. 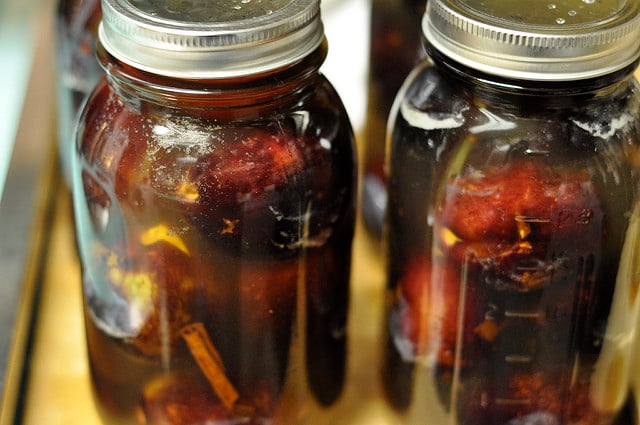 I haven’t tackled the pears yet, but last night I turned the raspberries into jam (stay tuned, I’ll have that recipe and giveaway up later in the week) and I canned four quarts of the plums in a honey syrup. Canning whole fruit like this couldn’t be easier, because beyond washing, the fruit needs no prepping (some recipes recommend piercing the skin with a sharp fork several times. I skipped it and the skins only barely cracked). You simply pack the raw, whole fruit as tightly as you can into your cleaned jars, pour the syrup in to cover, shake out the air bubbles and process. I tucked a cinnamon stick into each jar, but that’s as fancy as I got. The quarts process for 25 minutes in a boiling water bath and then you’re done.

So, if you have a glut of plums, this is a great way to handle them quickly and easily. When winter comes, you can eat them whole with yogurt or ice cream, make a cobbler with them, or even stew them down further and eat them over oatmeal. So, so good. Recipe after the jump. 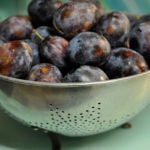 Posted in canning, giveaways and winners, whole fruits and vegetables