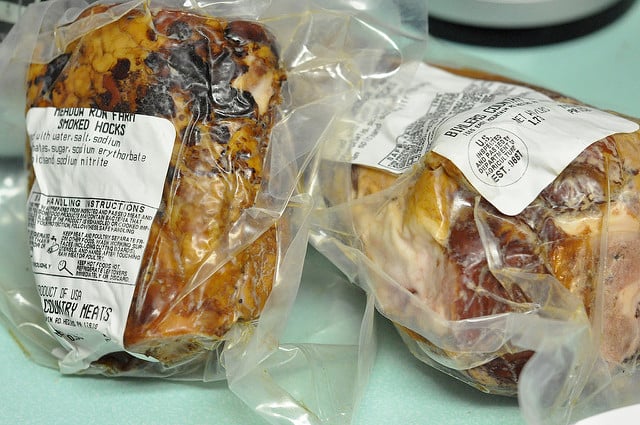 This year, for my 30th birthday, my fiancé gave me a pressure canner. Some might look at this gift as decidedly unromantic, but it was actually exactly what I wanted. In fact, I started telling him it was what I wanted sometime back in February, more than three months ahead of time, just in case he got it into his head to get me jewelry or some other impractical bauble.

However, since my birthday back in May, the only thing the canner (a 16-quart aluminum Presto) has been doing is look pretty while sitting quietly under one of my dining room chairs. You see, while I understood the basics of pressure canning intellectually, the reality of it still scared me a bit. So I let the canner sit, satisfying my canning needs by making batch after batch of preserves and pickles, that needed nothing more than a good, hot water bath to set to shelf stable rights. 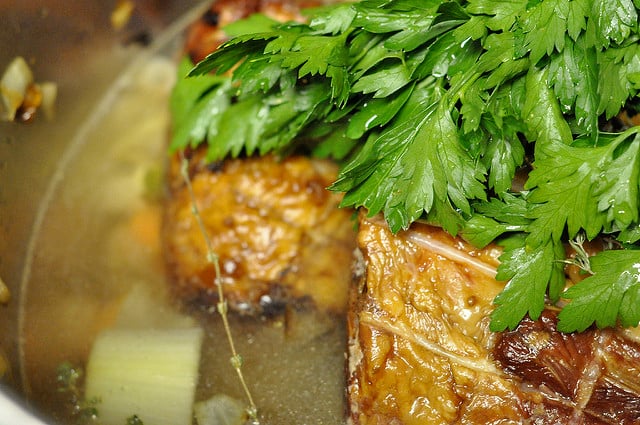 But then, a couple of weeks ago, Joy Manning and Tara Matazara Desmond, co-authors of the cookbook Almost Meatless invited me to participate in their blog potluck (Joy is blogging about all the potluck dishes over at her blog What I Weigh Today if you want to check out some of the other recipes). As we talked back and forth about which recipe of theirs I’d tackle, it became clear that this blog and I were best suited to try out a stock recipe, as stock is cannable. In a pressure canner. It was finally time to conquer my pressure canner nerves once and for all.

I decided to make the recipe for Ham Stock that’s found on page 136 of the book. While it’s not a main event on its own, it’s an incredibly useful cooking cast member to have on hand, as it gives you the ability to boost the flavor of many a meal while still keeping them light on meat. Not having the remnants of a ham laying around, I got my hands on a couple of nice, meaty ham hocks with which to make the stock. 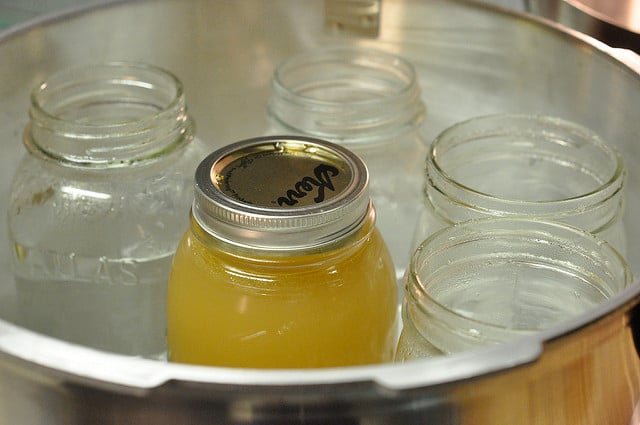 As soon as I fired up the stock pot, a wonderfully smoky/porky scent began to fill the apartment. Scott and I sat around, enjoying the aroma and becoming increasing hungry as the broth bubbled away. After it had cooked for two hours, I fished the hocks out of the pot with a pair of tongs, removed the meat to a plate and returned the bones to the pot for another hour+ of simmer for “maximum gelatin extraction” (a tip offered by Tara that isn’t included in the book).

By the time the stock was done, it was late Sunday evening (and I’d had a stomach ache all day, I’m a trouper I tells ya!). Had I had a spare bit of room in my fridge, I would have put the stock away for the night and returned to pressure can another day (this is actually the recommended technique, as it allows you to completely defat the stock prior to canning). However, being me, my fridge was full to bursting and so I needed to push on. I strained the stock through several layers of cheesecloth to get out the finest of particulate matter and returned it to the pot in order to bring to a boil. 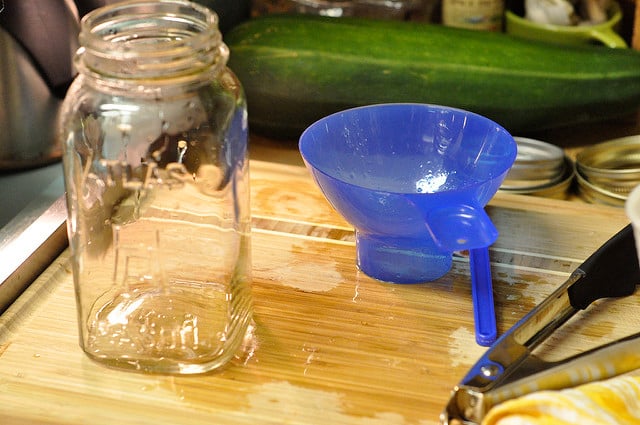 While all this stock processing was going on, my quart jars were in the pressure canner heating up. Once the stock had return to a boil, I began the process of removing a jar, filling it, wiping the rim, applying the lid/ring and returning it to the pot. Instead of creating an assembly line, I processed each jar one at a time, in order to keep the jars and stock as hot as possible (part of pressure canning best practices). I’d been told by Doris of Doris and Jilly Cook that it’s important to really get those rings on there tight when pressure canning stock, as otherwise your stock will “siphon” (the official canning word for when the liquid in your jars bubbles out from underneath the lid), so before I returned each filled jar to the pot, I used a dish towel to hold it in place as I muscled the ring into place.

Once all the jars were full, I locked the pressure canner lid into place and began the process of venting the air out of the canner. After ten minutes of venting, I popped the weight onto the vent stem and watched as the pressure began to rise. Quarts of stock need to process for 25 minutes at 11 pounds of pressure (that is, if you have a gauged canner like mine. If you have a weighted canner, you process at 10 pounds of pressure).

I only have six heat options on my stove (and that includes ‘off’) so I was never able to get the canner at exactly 11 pounds, it hovered around 13 pounds for most of the canning session. However, I knew from what I’ve read that it’s okay for the pressure to be a bit over (it can lead to overcooking, which isn’t a concern with stock, but could be a problem if you were working with fruits or veggies), as long as the pressure doesn’t drop below 11 pounds during the 25 minute processing time. 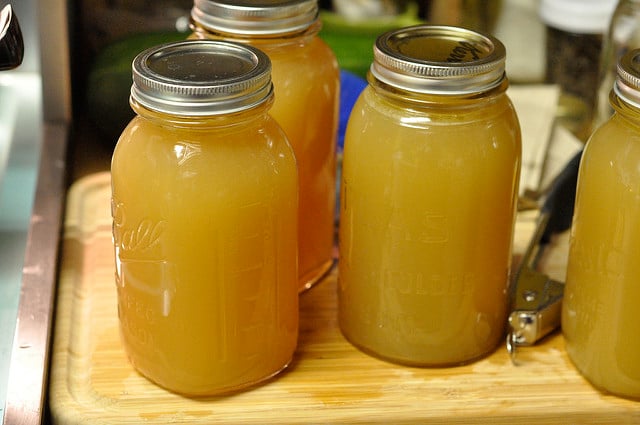 I’ve never been so delighted as I was when the timer beeped to announce that the 25 minutes were up. I danced to the kitchen to turn off the stove and wait until the pressure had dropped enough for me to remove the lid. Nearly every jar pinged  the moment I lifted it out of the water, and I’ve never had lids that have so vigorously sealed. Those things are seriously concave. 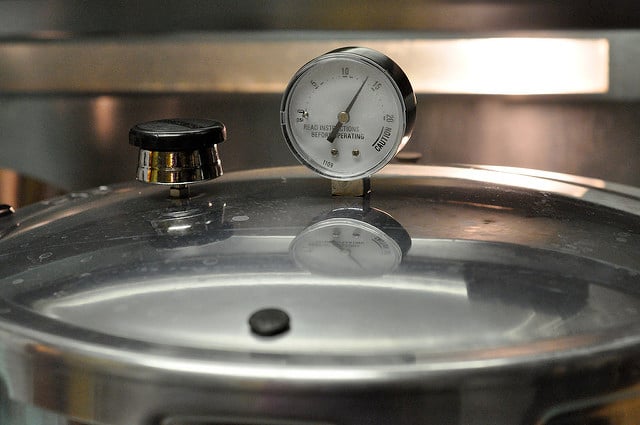 So now I have seven quarts of homemade, shelf stable stock (in my insanity, I also made a batch of chicken stock – from chicken feet! – the same day I made the ham stock. In for a penny…) in my pantry. I’m particularly in love with the ham stock though, and am already dreaming of making a big pot of rice with it that I will then turn into a vege-ful fried rice. Such flavor!

The Ham Stock recipe from Almost Meatless can be found after the jump and is reprinted with permission from Ten Speed Press and the authors. Make it! 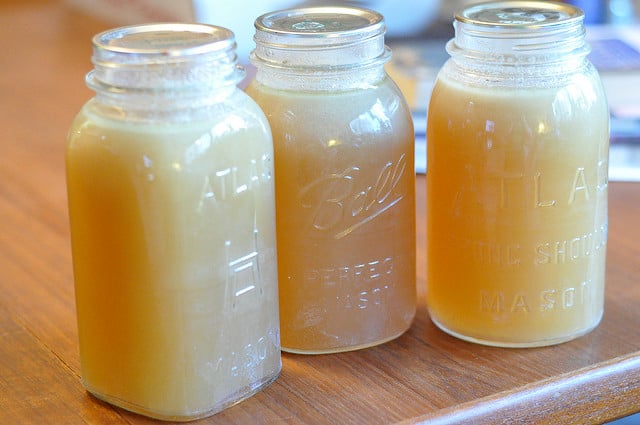 Tara and Joy suggest that you make this stock after the holidays, when many of us happen to have some ham bones laying around. While I think that’s a fine suggestion, I find this stock to be so delicious that I don’t think you should wait months before making it. I used two ham shanks from Meadow Run Farm, who raise only happy, pastured pigs, which also provided enough meat for one and a half generous meals in my little household. Everybody wins! 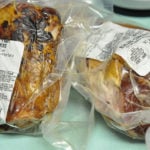 The Ham Stock recipe from "Almost Meatless" is reprinted with permission from Ten Speed Press and the authors.