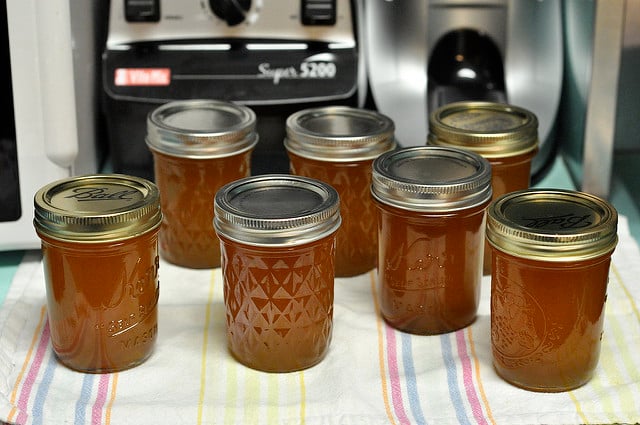 Until recently, I had never made jelly. I thought it was below me, designed for children and eaten only until chunkier preserves were palatable. However, having made this recipe three times now (once to test it, once for a class and a third time just for fun), I feel a bit ashamed that I’ve been so snobbish towards jelly.

I’ve eaten the results of this recipe on toast, in a sandwich with peanut butter, and thinned down as a glaze for chicken and it has been consistently delicious. It recalls a classic orange marmalade, only without all those bits of peel. It’s perfect for the person who likes the bright, familiar flavor of orange, but doesn’t do so well with the bite of marmalade. What’s more, it’s refreshingly easy, as you begin with a half gallon of freshly squeezed orange juice. Sure, you could juice your own, and if you live in those warmer climates where oranges abound, I recommend it. But up here in the chilly east, I cheat and I don’t feel a moment of guilt about it.

Another thing that has me enamored of this jelly is that it is blank slate for a number of flavors. Unadulterated, it is good (and yes, perfect for kids who don’t like assertive flavors). But it’s amazing with a dash of cinnamon or spiked with a few tablespoons of ginger juice. Want a mimosa flavored jelly? Replace some of the juice with some champagne (or white wine, if you don’t want to open a bottle of bubbly just for jelly making). Steep some chai spices in your orange juice for an earthy bite.

I do believe that this is just the beginning of my jelly days. Look for more (maybe a rhubarb jelly?) in the coming days.