Notes on a Batch of Sour Cherry Pie Filling 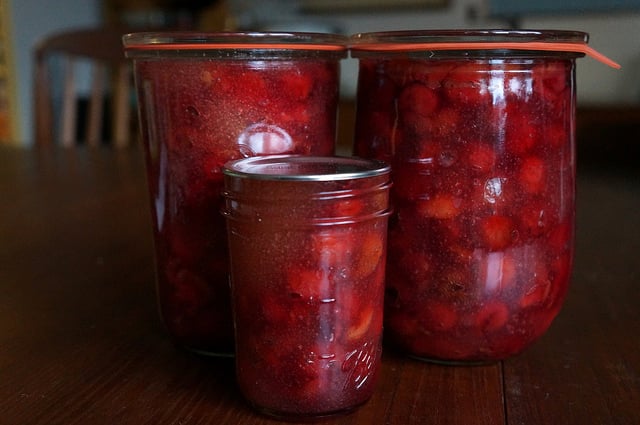 When I made the cherry pie for Sarah and Dave last week, I used the very last of my fresh cherries (it was the very end of the season, after all). Happily, I managed to snag enough sour cherries this year that in addition to making a bunch of jam and preserved cherries in a bourbon-spiked syrup, I also made a two quarts of sour cherry pie filling (plus one half pint jar of overflow).

One is promised to the winner of the Pie Box giveaway (have you entered yet?), but I have grand plans for the other one. Sometime next winter, when the days are painfully short and sour cherries are just a flickering memory, I will open that last jar and brighten my day with pie. 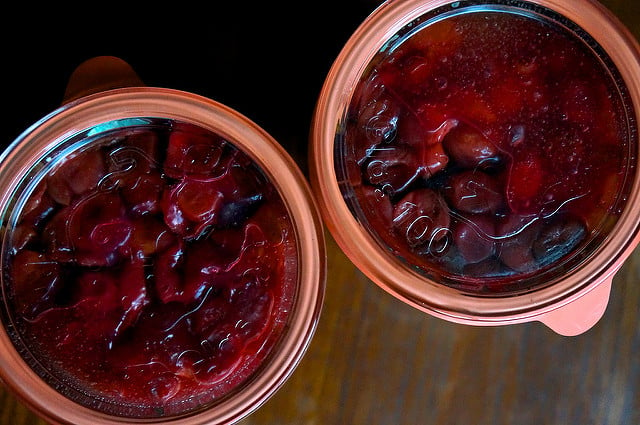 It had been at least two years since I worked with ClearJel and I remembered a couple things about it in this go-round (though a little too late to be truly helpful). The first is that I like a thinner pie filling than the National Center for Home Food Preservation’s recipe makes. This time, I’ve made a note in my cookbook to remind myself to go a little lighter on the thickener. Second, headspace is really important when canning pie filling.

You see, I didn’t quite tell the entire truth up above. When I made this batch of pie filling, my initial yield was three quarts. However, I was so focused on squeezing every last drop of pie filling into the jars that I overfilled that final jar. During processing, ClearJel expands a little and in the case of that jar, it expanded so much that it popped the lid right off. It was a frustrating reminder about the importance of following headspace instruction. Live and learn.

The recipe I followed can be found here. I made enough to fill three quarts and next time I make it, I will use a scant 1/4 cup ClearJel per quart (the recipe calls for 1/4 cup plus 1 tablespoon). I skipped the food coloring and cinnamon, but did add the almond extra.