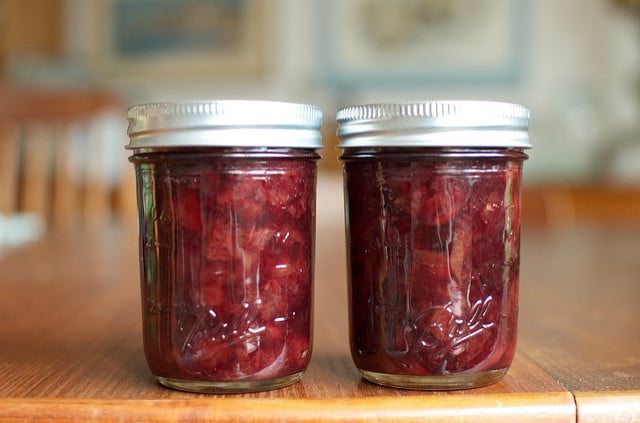 Sour cherries have long been one of my favorite fruits for preserving. I mostly missed the season last year and so spent much of late June and early July this year trying to make up for my lackluster show in 2012. I picked at least 15 pounds on my own and when that didn’t prove to be quite enough, I bought a flat from Three Springs Fruit Farms.

Towards the end of my sour cherry extravaganza, I found myself with both sweet and sour cherries. I could have made a duo of small batches of jam, but instead decided to combine them for a sweet and tart preserve. I used a lower than usual (for me) amount of sugar and turned to Pomona’s Pectin to help me out in the set department. The finished jam has much of the sour cherries tangy bite, but with the deep richness of the sweets. I am very happy with the result.

I realize that cherry season is rapidly drawing to a close throughout the country, but I wanted to get this one published to the blog in the hopes that maybe it will still be of use to some of you. Plus, I want to remember it for next year, as it’s a recipe truly worth repeating.

Speaking of cherries, the folks at Fillmore Container are hosting a giveaway this week, featuring this fun cherry pitter and one of the new blue heritage Ball jars. It screws on to a regular mouth mason jar and catches the cherry pits there (perfect if you want to use them for an infusion project). To throw your hat in the ring for a chance at it, head over to their blog. 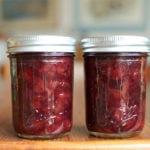