Looking to better understand why your marmalade turned out the way it did? Let’s walk through some marmalade troubleshooting! 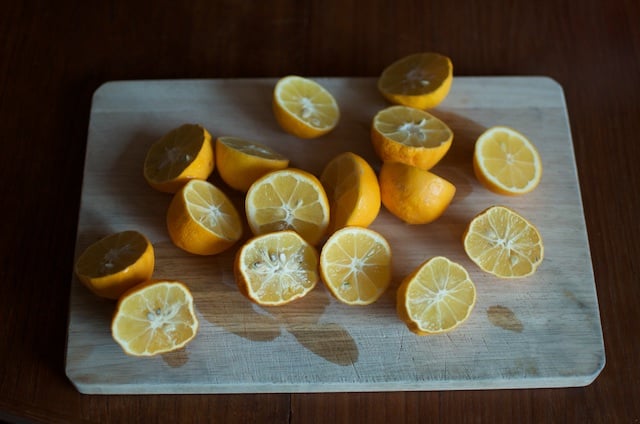 You’ve made your first batch of marmalade for the Mastery Challenge and it didn’t turn out as well as you’d hoped. Perhaps it was a little runnier that you wanted it to be. Or maybe it set up so firmly that you can barely slip the knife in. Did your batch yield a whole lot less than you thought it should? Let’s talk through some of these issues.

Let’s start at the top of the list. Your marmalade is sloshy rather than spreadable. When did you make the marmalade? It can sometimes take 24-48 hours for a batch to finish setting up. If your marm is still just an hour or two out of the canner and you’re worried about the set, walk away. Stop thinking about it for a little while. Check it again tomorrow.

So. You let the jars rest for a couple days and the marmalade still totally saucy. Next question. Did you follow a recipe or ratio? Marmalade is by its nature a high sugar preserve. When you reduce the sugar or use a natural sweetener, achieving set can be harder, because there may not be enough sugar present in the preserve to elevate the temperature to the 220F set point.

Did you check for set while the marmalade was cooking? Any time a recipe gives you a cooking time, it is only a general range. During cooking, you also need to be checking for signs of set. You do this by using the frozen plate test, watching how the marmalade sheets off the spatula, paying attention to how much it has reduced, and taking the temperature as it cooks.

What kind of pot did you cook the marmalade in? Like most sweet preserves, marmalades like to be cooked in low, wide pans. High sided pans with narrow openings will trap evaporating water and make it harder for the fruit to reduce. For small batches, try your biggest frying pan rather than a saucepan.

Let’s visit the other side of the coin. Do you feel like your marmalade is too firm? If it’s more candy than spread, chances are good that you overcooked it. If you were using a thermometer to monitor the cooking temperature and you never managed to get to 220F, but it bounces like a rubber ball, the thermometer might be to blame. If you think this is your problem, read this post.

Are you disappointed with your yield? Marmalade is labor intensive, so I understand how frustrating it can be when you yield less that you’d hoped. Know first that it’s totally normal for the same recipe to shift its yield about a cup in either direction every time you make it.

To help prevent short yields in the future, make sure that you’re monitoring the set, so that you can take the pot off the heat as soon as it becomes clear that your marmalade is going to set up. The longer you cook, the more product is evaporating away. Overcooked preserves yield less, so if you are a chronic underyielder, longer cook times could be your issue.

Other things that lead to short yields are reduced sugar, overzealous trimming (if you discard a goodly amount of your fruit while preparing it for cooking, you’re whittling down your yield), shorting your measurements, and aggressive tasting.

Let me know if you’ve had other issues as you worked through this first #fijchallenge. I’d be happy to do another one of these troubleshooting posts if you’re having issues I didn’t hit on here.