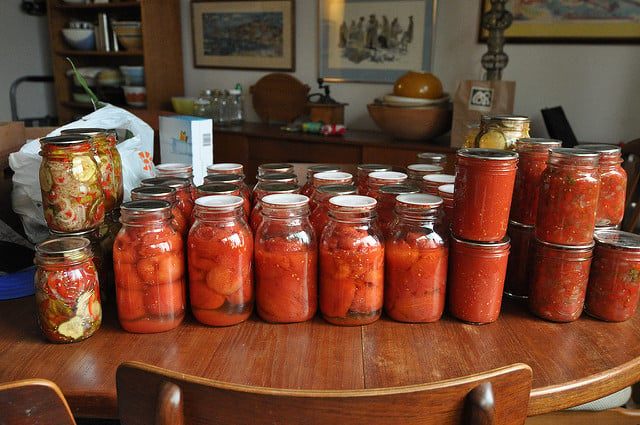 You hear a lot of differing advice from people on the subject of how long it’s okay to keep your preserved food once you’ve canned it. Some people say that it’s a year to the date that it went into the jars. Others will tell you that they recently ate the last of the tomatoes their grandmother canned in the summer of ’99 (1999, that is). I’m here to tell you that it’s somewhere in between.

If you talk to one of the Master Food Preservers out there or folks from the National Center for Home Food Preservation, the answer goes something like this: “For highest quality, properly stored preserved foods are best eaten within a year of canning.” (Here’s exactly what the NCHFP says.)

Some people might read that statement and think that it means that they have exactly a year to eat through every last jar. The real answer is a bit more nuanced. You will get the very best flavor and quality from a jar that is in its first year, but there’s no internal self destruct devise inside the jar that goes off on day 366 or 367. Preserves older than a year are still safe for consumption.

Home preserved foods remain safe for eating far longer than their first year, but their quality does decline the longer the jars remain on the shelf (or in my case, under the couch). This means that the jam you made two or three years ago is probably still just fine to eat but it may not taste quite as good as did on that summer afternoon when you first put it in the jars. Chances are good, though, that it will still be more delicious than anything you’re able to buy at the grocery store.

If you have some elderly high acid preserves that you’d like to eat up but are making you nervous, here’s what to do. Pull one off the shelf and take a good look at it. In the case of jams, jellies, butters, and other spreads, look to see if it changed colors radically (a little surface discoloration is normal, but total color alternation or loss is suspect). For pickles, relishes, and whole preserved fruit, look at the quality of the brine or syrup. Has it gotten muddy or opaque? Has the liquid level dropped significantly?

If you don’t see any major change, open up the jar. Look at the surface. Has any mold or scum developed? Give it a good sniff. Does it smells funky, dirty, or boozy (do check to see if you added alcohol to the starting preserve, as then it won’t be a useful symptom of spoilage).

Once you’ve determined that all is well, give it a taste (for spreads that have darkened slightly on the surface, feel free to scrape away that top half inch). If you like how it tastes, dig in and include it in your rotation of open jars. Repeat these steps for each older jar you have in your stash.

Sometimes, long storage will rob a preserve of its flavor, particularly if it was sweetened lightly, or with honey or a sugar substitute. If it doesn’t taste like a whole lot, it may not be appropriate for spreading on toast, stirring into yogurt or serving with cheese, but you can always use up those less delicious jars in quick breads or as part of a braising liquid.

All that said, if you feel at all uncomfortable about something you canned, it is still always better to toss it than eat something that gives you pause. If you cringe every time you reach for a particular jar, it’s time to empty it out and move on.