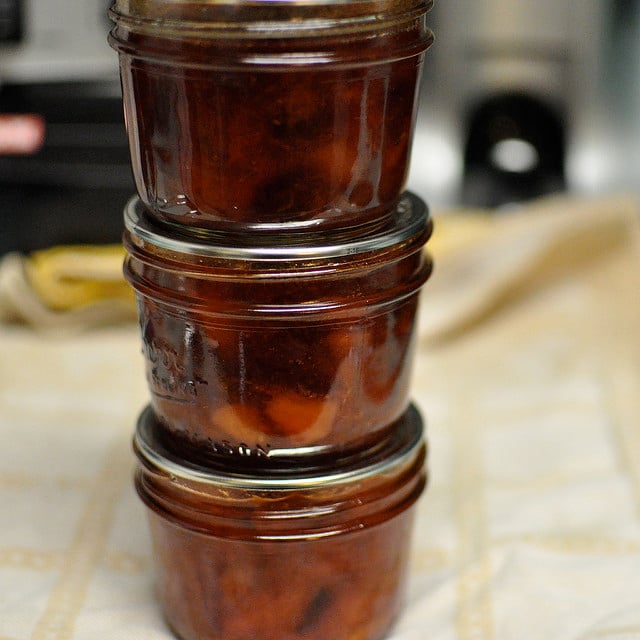 About a week ago, I had three peaches going mushy, a handful of soft apricots and a flat of sugar plums all competing for my attention. Knowing that I couldn’t ignore all that overly ripe fruit a day longer, I peeled and chopped the peaches and diced the apricots. The plums were promised to another project, so I couldn’t pilfer too freely. I liberated just enough to bring the volume in my measure to up to three cup mark.

This all happened just before I went to bed, so I combined the fruit with a scant two cups of sugar and poured the whole mess right up to the rim of a wide-mouth quart jar. Into the fridge it went.

The next evening, after the dinner dishes were done, I poured the prepared fruit into my small batch cooking pot and prepped three half pint jars, hoping that I’d lose that final half pint during the cooking process. I added no additional pectin, choosing instead to cook the jam up to 220 degrees and hope for the best. I added the juice and zest of one lemon towards the end of the cooking. The fruit itself was so sweet, tart and flavorful that it didn’t need an additional things in terms of spices (although a bit of vanilla or cinnamon would be lovely).

It hit 220 degrees easily and as I filled the jars, I was happy to discover that I had exactly enough for the three half-pints (I promise, this exactitude rarely happens to me). I processed them in my handy asparagus pot for ten minutes and had pinging lids very soon after that.

Less than an hour of time invested (over the course of two nights) yielded three half pints of truly tasty jam, as well as the satisfaction of rescuing good food from a certain, moldy fate.