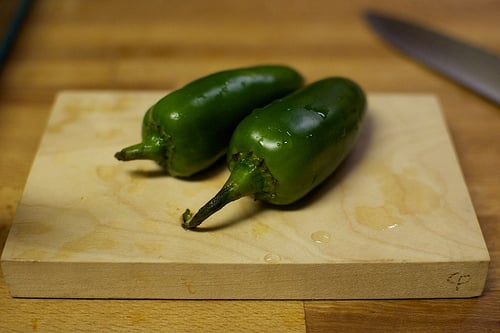 Using the syrup leftover from canning peaches to make jelly is not an idea original to me. I got the idea from Putting By, and it was such a good one that when I canned my last batch of the season, I made certain to strain my remaining syrup and stash it in the fridge.

Well, that was a month ago. I’d see that jar of syrup every time I opened the fridge and each time, I’d give it a little nod and a promise that soon, soon I’d pay it a bit of attention. Every so often, I’d crack the lid and take a whiff to make sure it wasn’t fermenting, before putting it back behind the yogurt container. 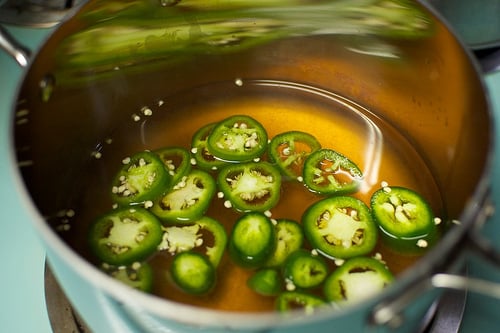 Finally tonight, the stars aligned and I talked myself into the kitchen after dinner, in spite of nearly falling asleep on the couch at 8 p.m. My commitment to canning truly knows no bounds. 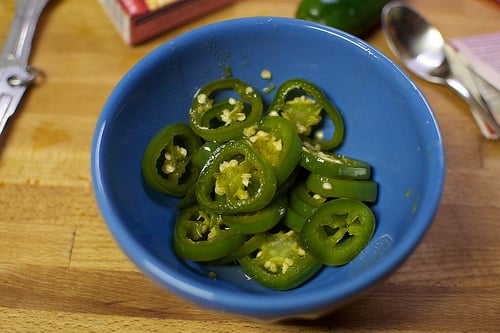 I started with 24 ounces of leftover syrup. I strained it into a saucepan (in order to remove the bits of peach particulate matter that could have made the jelly cloudy) and dropped in two sliced jalapenos. I let that simmer for a bit, tasting every minute or two until it had reached the level of spiciness I could handle. Then I added two cups of sugar, stirred, removed the jalapeno rings and stirred in one tablespoon of regular old powdered pectin. 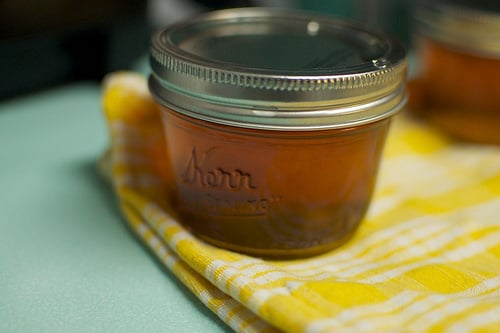 I boiled the mixture until it reached 220 degrees, strained it again (to remove the rest of the jalapeno seeds) and filled the jars. Processed the half pints (three in total) for ten minutes. So far, it’s still quite liquid-y, but judging from the way the remains in the pot looked, I’m confident it will set. The flavor is good too. Slightly spicy (I’m not a heat freak), fruity and so fragrant of those peaches (I still can’t quite believe that they’re gone for the year).

*Update*
After a week, this jelly has set nicely and firms up even more when refrigerated.