Regular Food in Jars contributor Alex Jones drops by today to share her experience making jelly using both Pomona’s Pectin and homemade gooseberry pectin. Read on for her tale of experimentation! 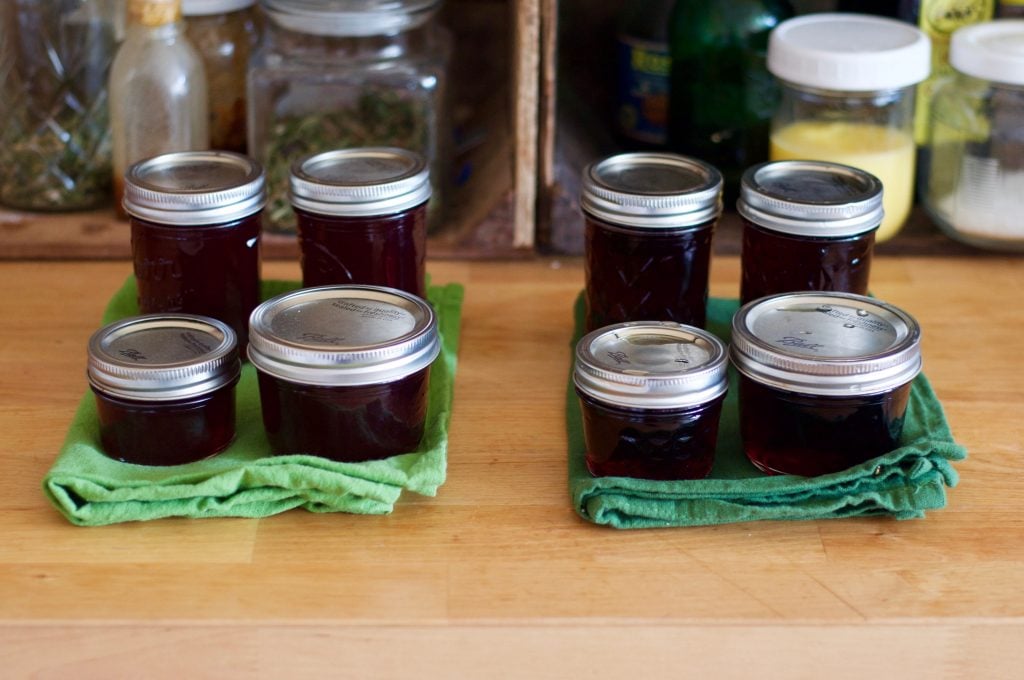 Ah, jelly month. It’s time for me to reckon with pectin.

If I recall correctly, this Mastery Challenge is only my second time making jelly. The first was a few years ago when I worked as the buyer for an all-local foods store here in Philly, Fair Food Farmstand. We got some Japanese knotweed in early April, and I set to work making a tart, pale-pink jelly out of this invasive plant as a way to preserve it. But the set was unappealing and too firm for me, so I gave the still-sealed jars that were left to a friend excited about foraged foods.

For every time I’ve made jam or other preserves with pectin, I can count a time when set didn’t occur or occurred too well. So in recent years, I’ve avoided it, eschewing recipes using pectin for the whole-fruit preserves and confitures found in Mrs. Wheelbarrow’s Practical Pantry, one of a select number of preserving books I own. These fruit preserves manage to be thick and spoonable, and I love them — but it was time to tackle working with pectin.

When it came time to consider this month’s challenge, I had a freezer full of fruit to work with (and thanks to the time I spent organizing my chest freezer last month, I knew exactly how much and where it all was). There were three gallon bags of West Philly-grown sour cherries in there that needed to become something great — so I pulled out two of them to thaw in the fridge. I’d also use the dregs of a bottle of St. Germain elderflower liqueur, since those flavors go so well together.

And, since I like to do things the hard way sometimes, I searched online for homemade pectin alternatives to the packaged stuff that had vexed me in the past. Mrs. Wheelbarrow came through yet again, this time with a post about how to make and use pectin from green gooseberries — a bag of which, harvested from my community garden two summers before, also languished in my freezer.

Roughly a quart of gooseberries, simmered with water, strained through a jelly bag, and cooked down again until the pectin formed a mass that could be picked up with a fork when dropped into alcohol, yielded me two four-ounce jars, one to use now and one to stash away for later. 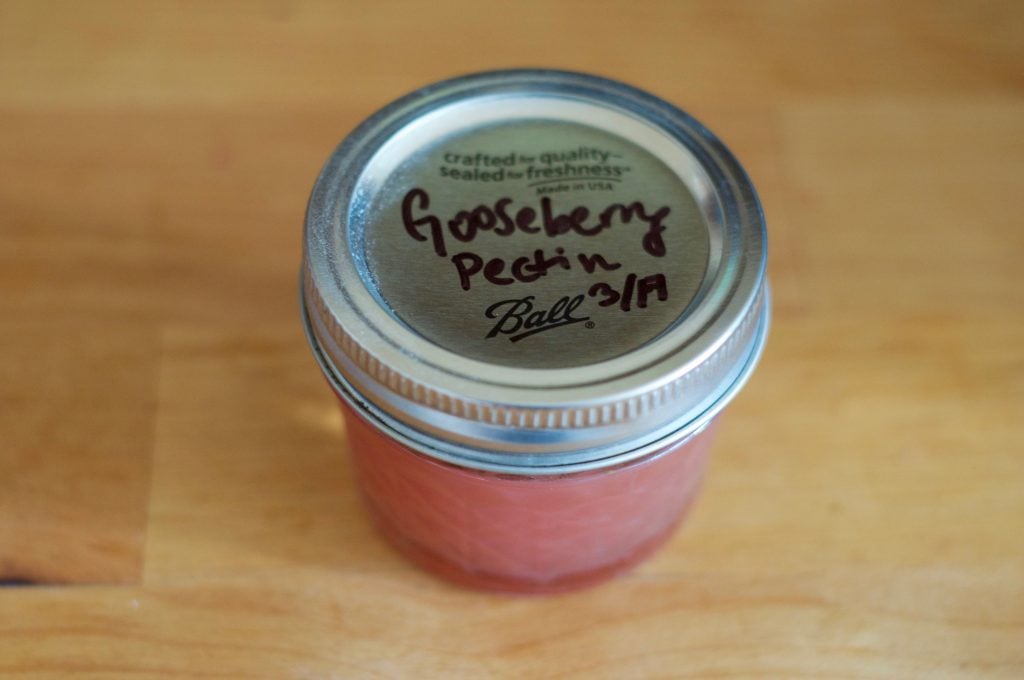 Along with an unopened box of Pomona’s Pectin that had been in my pantry for a couple years — according to the manufacturer, it will last indefinitely if stored cool and dry — I had what I needed to find out (a) if I could be trusted to make something tasty from the packaged stuff and (b) if my woo-woo homemade method could be used for jelly made with low-pectin fruit.

The results? Yes, surprisingly, and sort of!

Here’s how the experiment went.

First, I cooked up a little over six pounds of my frozen, pitted sour cherries with about three and a half cups of water. (Note that you don’t need to pit cherries to make jelly — a tip I’ll keep in mind when I’m short on time in cherry season in the future.)

I gave the mixture a mash and strained the fruit and juice through a jelly bag, making sure to give the juice at least six hours to drain out and taking care to not squeeze the bag, which could create a cloudy jelly. Keep in mind that, if working from whole fruit rather than pre-made juice, you may want to start your jelly making the day or night before to give the juice a chance to drain properly. 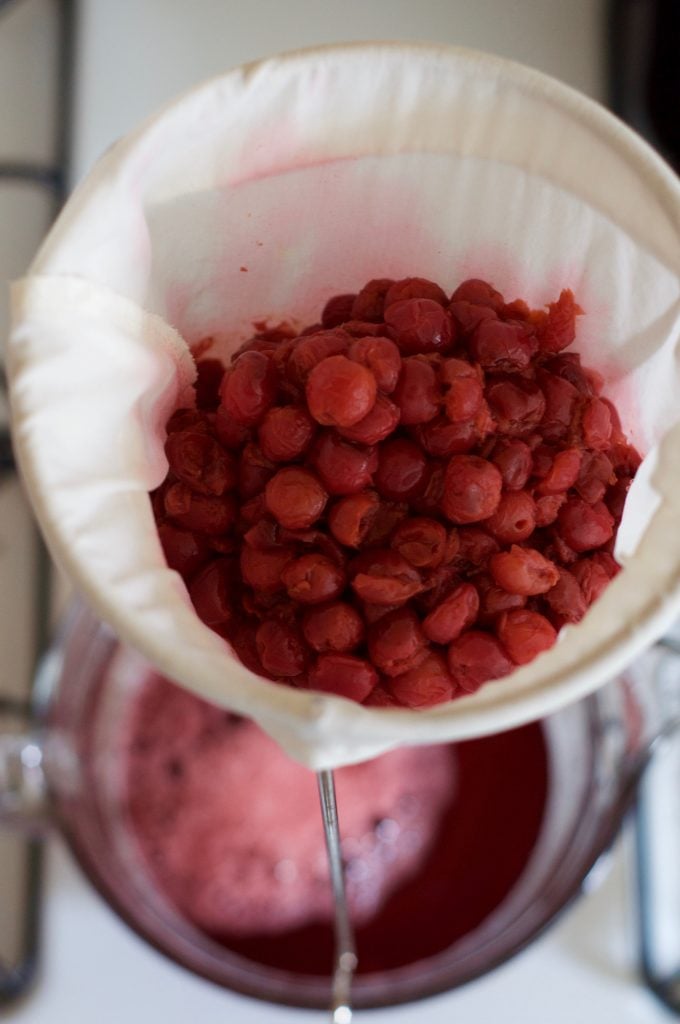 Next, I watched Marisa’s awesome jelly-making live video on the Food In Jars Facebook page, where she tackles tart cherry jelly made from Pomona’s Pectin and bottled juice (definitely a time-saver). I wanted to make sure I had the recipe for working with Pomona’s down before I attempted it — I have always found the directions included in the packet to be sort of unclear (what do the daggers next to certain ingredients mean? Why is lemon juice listed twice??).

For the Pomona’s recipe, I prepared my calcium water and separated the sugar — only one and a quarter cups total — so I’d be able to combine some of it with the pectin before mixing it into the boiling juice. For the gooseberry pectin recipe, I pulled the sugar — equal to the amount of juice, nearly three times as much as the other recipe — and juiced a lemon, reserving the seeds in a tea ball to add a pectin boost. 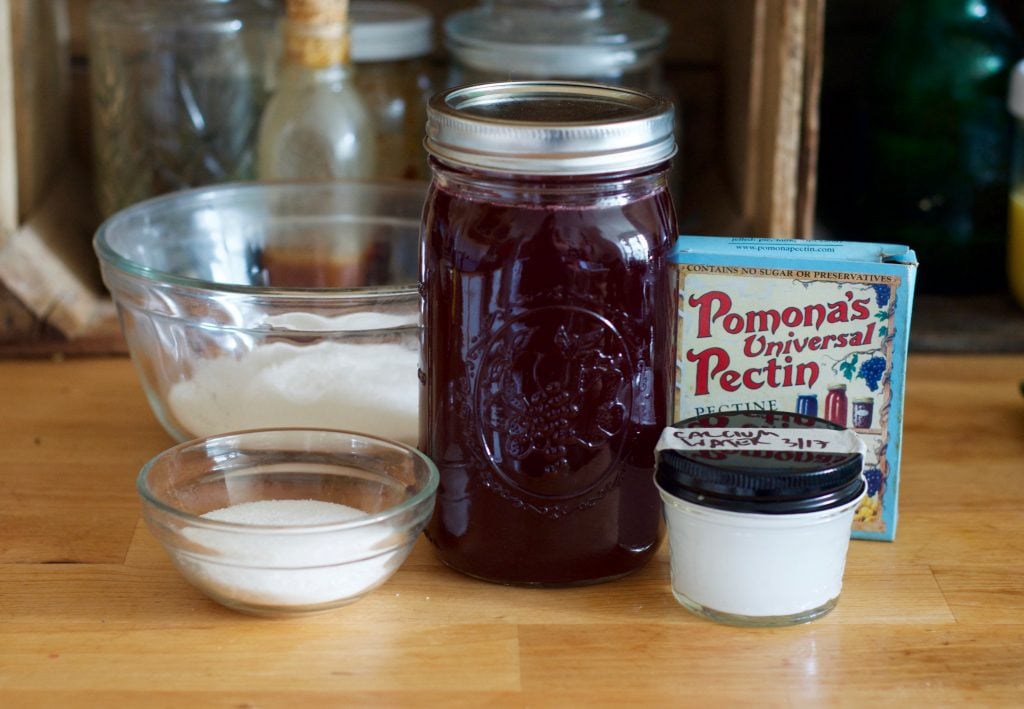 First, I made the Pomona’s batch. Everything went according to plan: Boil juice and sugar, add calcium water, combine pectin powder and reserved sugar, whisk into juice, boil for a few minutes until it sheets from the spoon. 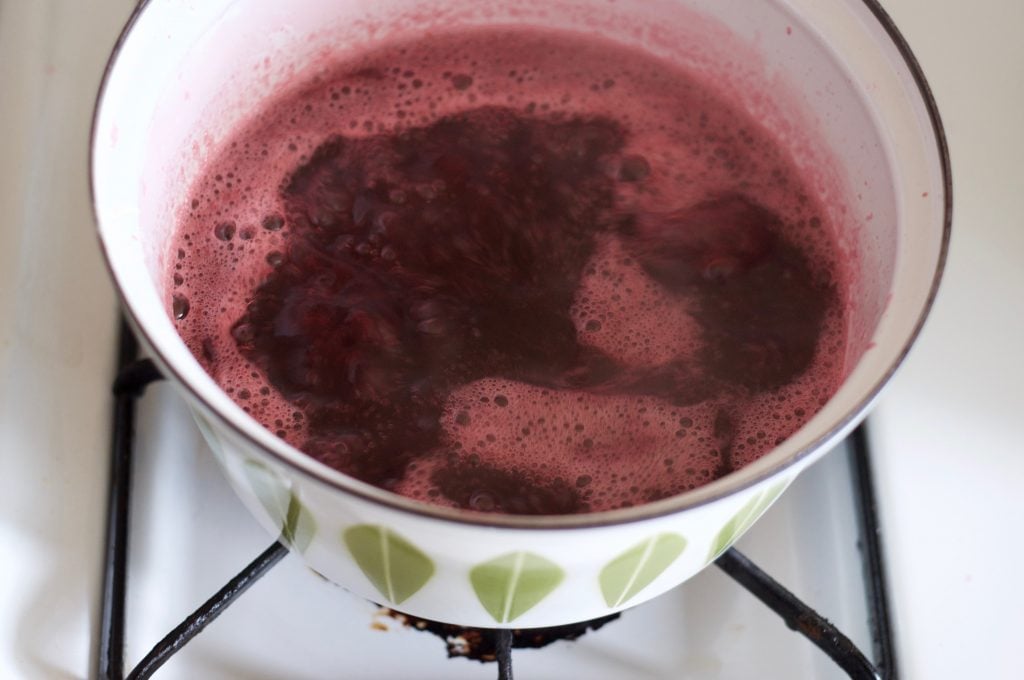 The jelly went into my water bath canner for 10 minutes, and the jars thickened up as they cooled over the next few hours. What was left in the jelly pot also thickened quickly, so I knew I’d achieved some kind of set. 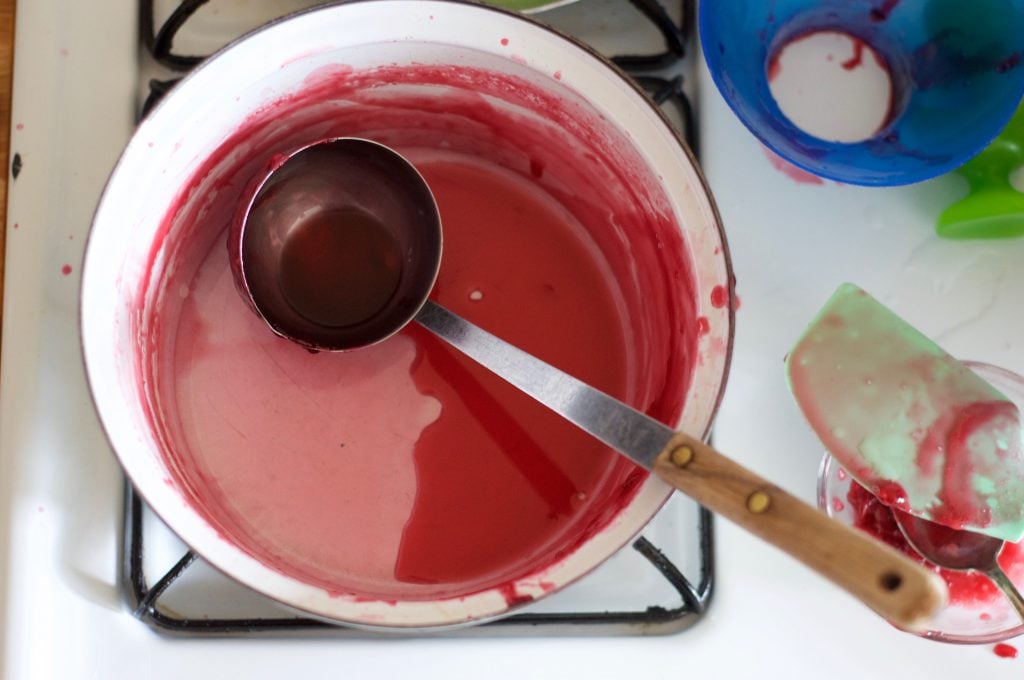 Well, that was easy — with a little extra instruction, I had used Pomona’s Pectin and made something that preliminary tasting indicated would be quite palatable. But how did the gooseberry pectin perform?

I started the same way, heating my scant quart of juice and the sugar, a whopping three and a half cups, along with the lemon juice and tea ball full of lemon seeds. Once it came to a boil, I added four ounces of the gooseberry pectin. Then I proceeded to watch and wait.

Once the mixture started boiling furiously, I put a small plate in the freezer and started checking temperature with my ThermoPop. The mixture hit 220 degrees F after about 15 minutes, but it didn’t pass the plate test until 25 minutes had elapsed and the thermometer was showing 225 degrees. I probably could have let it go even longer for a slightly firmer set. 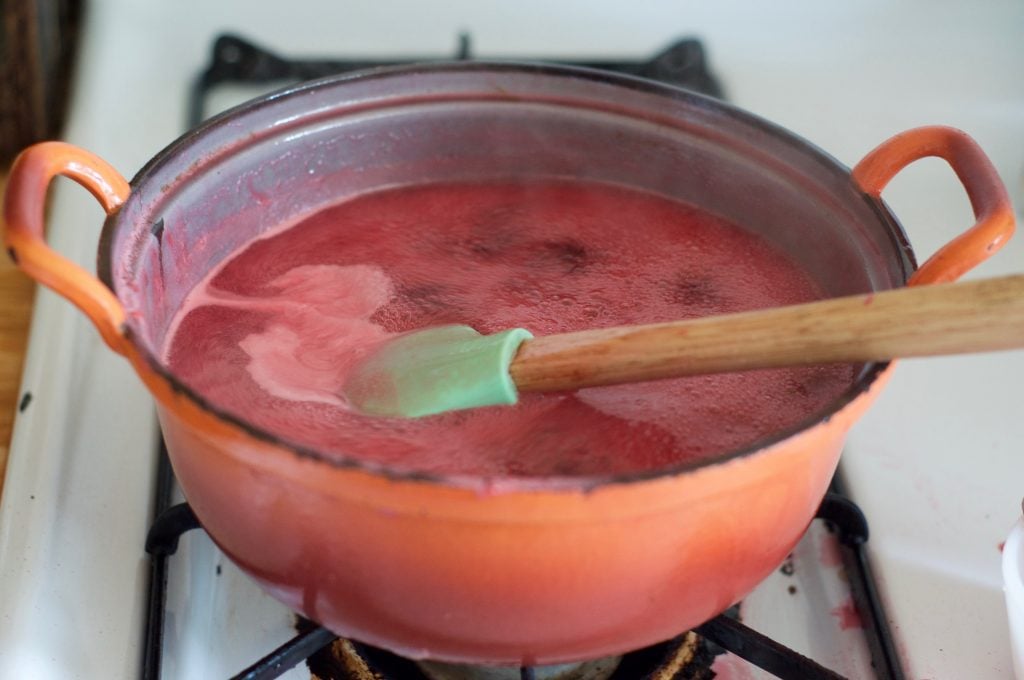 This recipe went into jars and was processed for 10 minutes; despite the increased quantity of sugar, I had to boil this one down so much that I only had an additional eight ounces over the Pomona’s recipe (which, since I’m short on jars, went into a 12-ouncer and into the fridge to eat first).

The next morning, I checked the set of both batches. The Pomona’s recipe was like Jell-O: clear and jewel-like, decidedly jelled but not quite chewable. I would have preferred a slightly softer set here — maybe I just don’t really like jelly? — but I’d feel good giving this preserve as a gift and writing “jelly” on the label.

The gooseberry pectin batch that sat in the fridge overnight had definitely jelled, but I’d call that texture more appropriate for a spoon than a knife — still spreadable, but softer and saucier. 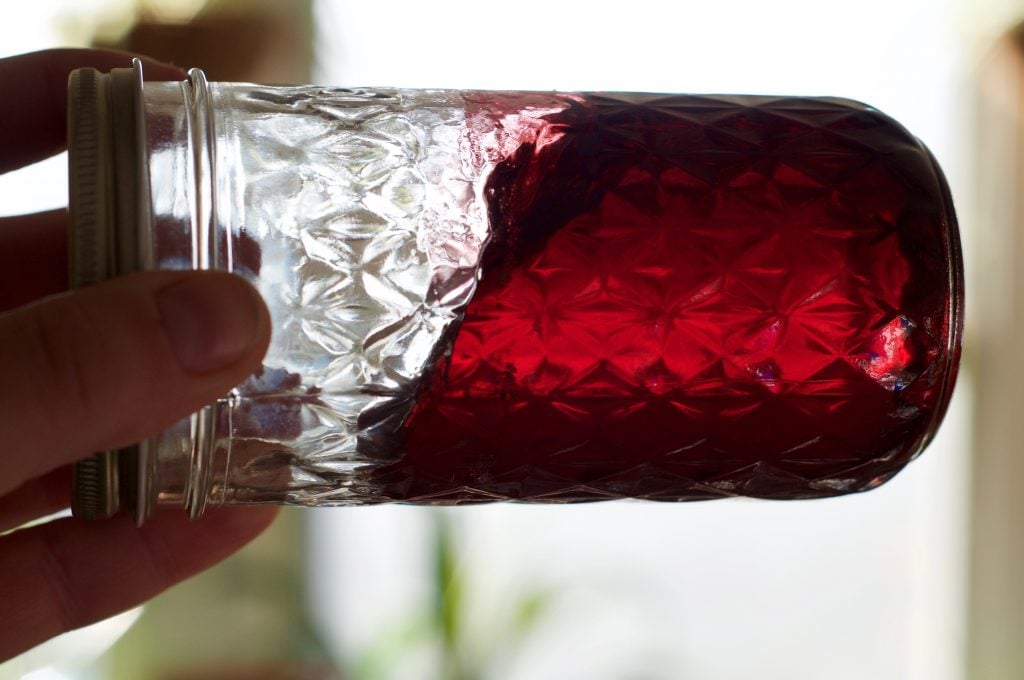 The photo below shows a spoonful of the gooseberry pectin batch on top and the Pomona’s batch on the bottom. See how much firmer the Pomona’s one is? 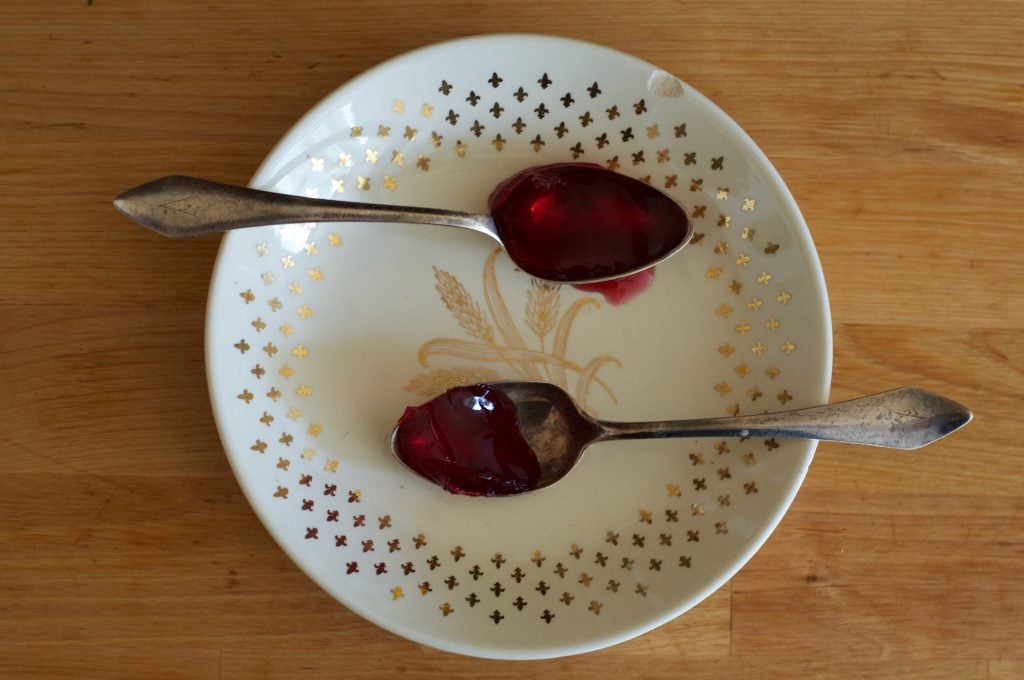 There was also a difference in flavor: The Pomona’s recipe tasted a little milder, with the cherry flavor coming through more strongly. The lemon flavor really came through in the gooseberry pectin batch; while you could still taste the cherry, it wasn’t up front like in the other batch, and the elderflower endnote was a little harder to detect.

In the end, I liked the flavor of the Pomona’s recipe better. In terms of set, something in between the two jellies I made would be ideal — something I’ll keep in mind when using gooseberry pectin with low-pectin recipes in the future. With a longer cooking time, I think it would be possible to get closer to the elusive set I’m searching for.

Since Marisa will be posting her tart cherry jelly recipe, I’ve included the recipe for this jelly made with gooseberry pectin here — and I hope to do a more involved post on making gooseberry pectin when my local bush is full of green berries in midsummer.

What’s your ideal jelly texture? Have you tried working with Pomona’s Pectin? What about homemade pectins made from gooseberry or unripe apple? Share your tips and tribulations with us! 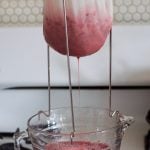