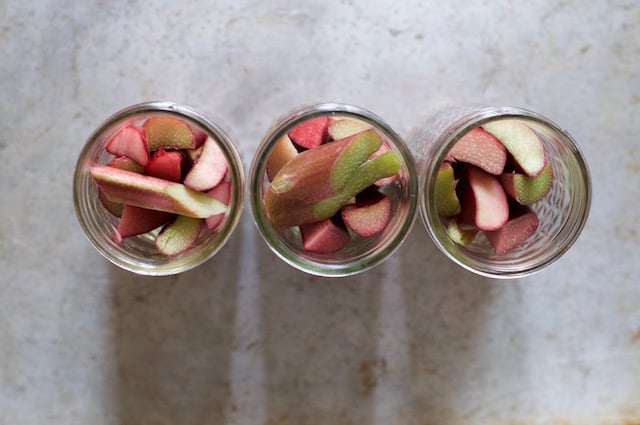 When I see the first harvests of rhubarb hitting farmers’ market tables among still-puny bunches of kale and last season’s root crops, I feel a surge of hope: spring is really, actually happening.

I also think of my maternal grandmother, an almost-nun turned feminist firebrand and mother of 11 who kept a huge vegetable garden — including a big patch of rhubarb — at her house in Quebec when I was a kid. Granny is the reason I turn my nose up at strawberry-rhubarb anything: her lip-puckering, sweet-tart treatment of the ingredient served straight up in pie, cobbler, and roly-poly became my standard and favorite for fruity baked goods.

As an adult, I’ve tried to do more with rhubarb than dessert, but no recipe I’ve come across that didn’t involve sweet, buttery dough has ever really seemed like it would be worth the trouble to try. So when this month’s Mastery Challenge came around during rhubarb season, I decided to give it the cold-pack pickle treatment.

Cold-pack preserving — popping produce into your prepared jar and adding hot brine, juice, water, or syrup before sealing and processing — is some of the simplest, most versatile preserving one can do. Pickles and whole or cut fruit have endless uses in the kitchen, and many types of fruits and vegetables can be preserved this way. Why had I never tasted a rhubarb pickle before? I set out to try making my own. 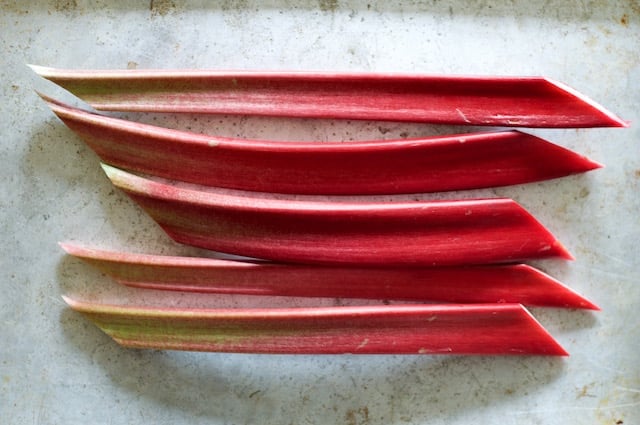 While I own several preserving cookbooks, my first impulse when looking for a new recipe is to search what’s out there online. Lo and behold, a 2012 Serious Eats recipe from our fearless Food in Jars leader Marisa was the top result.

With a trusted source recipe and a pound of crisp, ruby-red stalks in hand, I considered my options. I decided these pickles would look (and taste) steller alongside some crumbly raw milk blue and lush, savory Brie on a springtime cheese board.

Having recently worked a veggie-centric cooking gig that gave my knife skills lots of practice, I pictured an angular, artsy arrangement bias-cut rhubarb sticks alongside the cheeses in my mind’s eye. I decided to cut the rhubarb into long sticks, similar to Marisa’s in her original post but with a long, saucy diagonal on the end. And to show the pickles off, I chose one of my favorite jars, a long and lean straight-sided 12-ounce, in which to pack them. 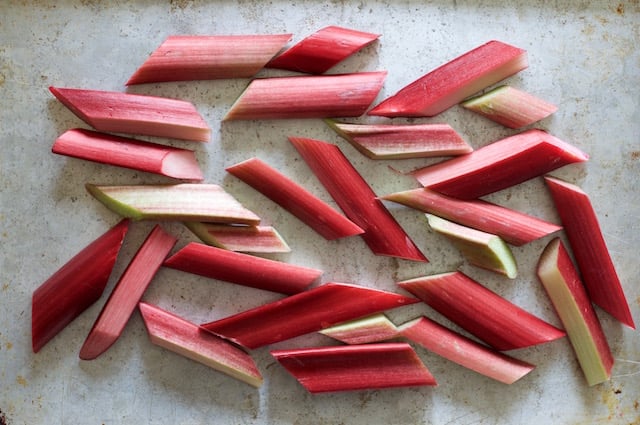 So I set about following the recipe — sticking to it closely, in fact, since this was my first time making it and I wanted to try the original before going crazy with variations. I knew the method by heart, of course, and these pickles came together super quickly.

After letting them sit for a few days to cure, I tasted the final product. What I ended up with was sweet and tart, just like good rhubarb should be, with a pleasant amount of spice from mustard, clove, black pepper, and star anise. While the texture is decidedly not crispy, the pieces keep their shape when you spear them with a fork but are soft and almost spreadable, perfect for eating on a crispy rice cracker with a smear of pungent, creamy artisan cheese. 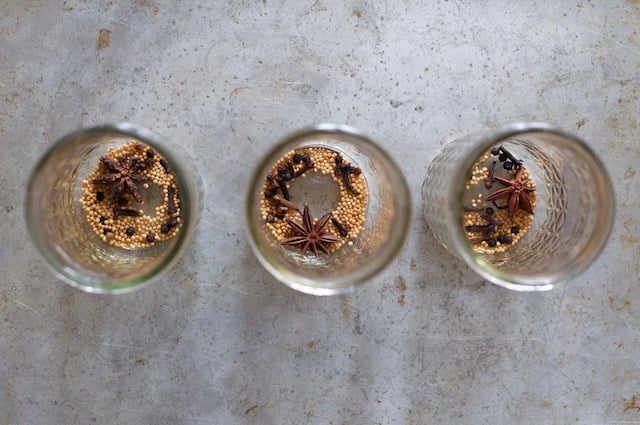 What I didn’t love was the way the pickles looked in the jar — which inspired one of those maddening “Why didn’t I think about this earlier?” moments. The beautiful angled ends of my rhubarb made it through the processing step just fine. But they hovered a few inches above the bottom of the jar and looked, well, a little silly to me.

Luckily, these pickles were for personal consumption, not special occasion gifts or wedding favors or anything, so no big deal. But this experience did underscore for me how important it is to pull back and consider everything you know about a technique like pickling before plowing ahead with a recipe like it’s second nature. A good reminder to give oneself early in preserving season! 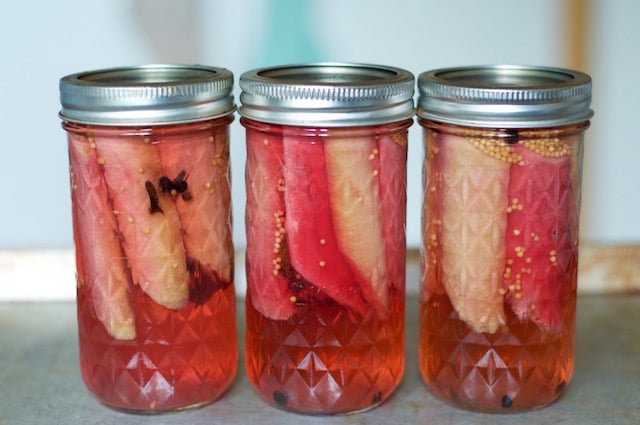 Of course I know that jars with shoulders are better at keeping pieces of fruit or vegetable in place. Of course I know that a smaller cut of rhubarb with a less steep angle (or perhaps a whimsical roll cut) may have stayed in place a little more easily. I was just so confident that I didn’t think about it. Even in Marisa’s photos from her original recipe, the long, straight stalks of rhubarb are floating slightly above the bottom of the jar (hers were simply longer than mine, with straight ends, so it’s way less obvious).

Next spring, I’ll remake this same pickle, cut into long, straight sticks or smaller segments, and maybe even packed into jars with shoulders to keep the contents ready for gifting or glamour shots. For now, I’ll just have to enjoy my pickled rhubarb for how good it tastes.

How are your cold pack projects going so far? Are you experimenting with any new produce, jar styles, or cuts? Let us know in the comments! 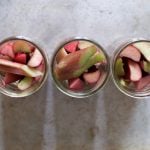