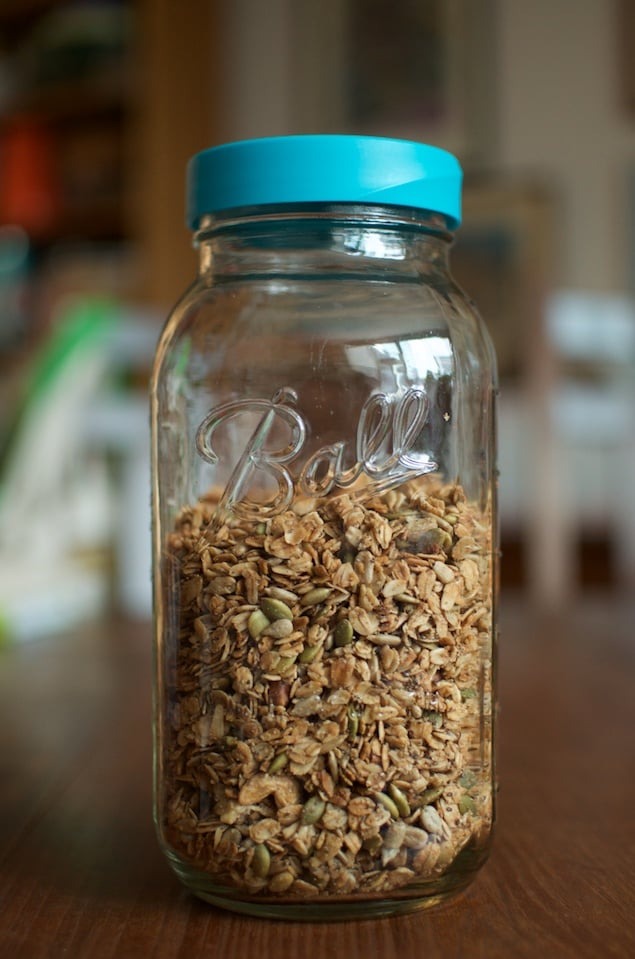 Last week, I was overcome with the need to make granola. It had been months since my last batch and I missed the simple act of measuring, mixing, and baking. There was a bag of mixed nuts and seeds sitting in the fruit basket that had been there since Christmas that needed to be used. And finally (and most motivating), I just really wanted to eat some. 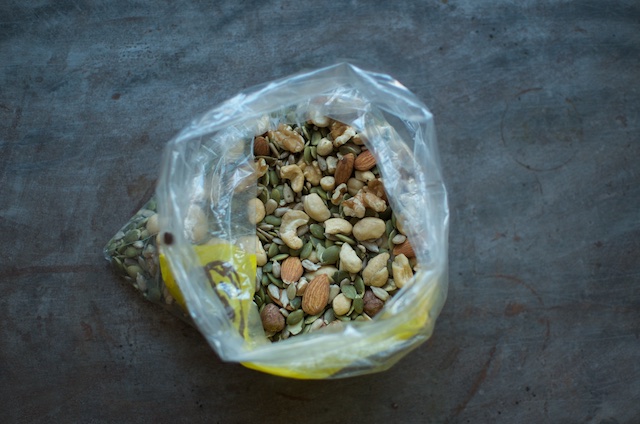 I bought this one pound bag of mixed nuts and seeds during the holiday rush, thinking I would include them in a batch of brittle. It never happened and so they languished. However, it seems that granola was actually the higher calling for this assortment of cashews, pumpkin seeds, hazelnuts, almonds, walnuts, peanuts, and sunflower seeds. So much variety with such ease! 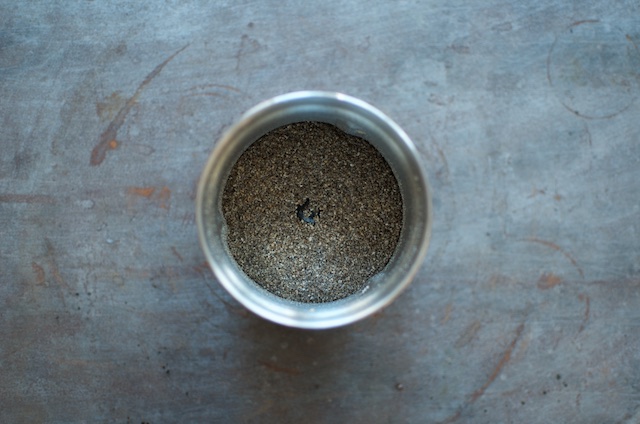 As I was sorting through my pantry to determine what else would go into this granola, the jar of chia seeds caught my eye. I’ve long been interested in chia, not so much for its nutritional ability, but for the fact that it has the ability to thicken, bind, and sometimes act in the same manner as an egg. I decided to grind a few tablespoons in a spice mill and add them to the mix, to see if they’d lead to a clumpier granola (much in the way an egg white can do). 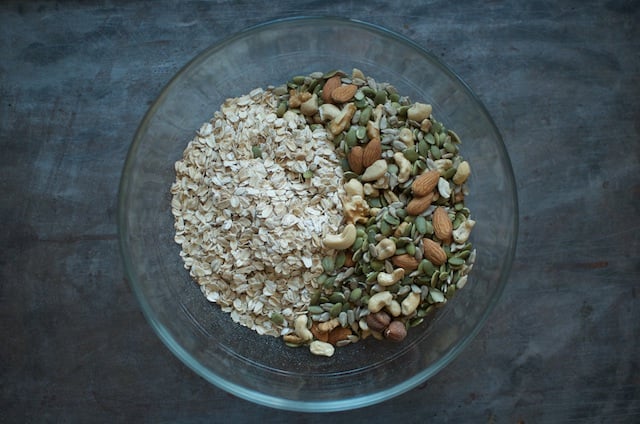 I combined the ground chia seeds with the liquid ingredients (maple syrup and olive oil), and let them sit for a bit to activate the chia goo. While they sat, I measured out thick-cut rolled oats and some of the mixed nuts, as well as a bit of cinnamon, nutmeg and salt.

Then I poured the maple, oil, chia slurry on top. I took a goodly number of pictures of that process and so threw them together into a GIF. I’m afraid it might be a wee bit too speedy for some, but it’s my first one, so I’m going with it. 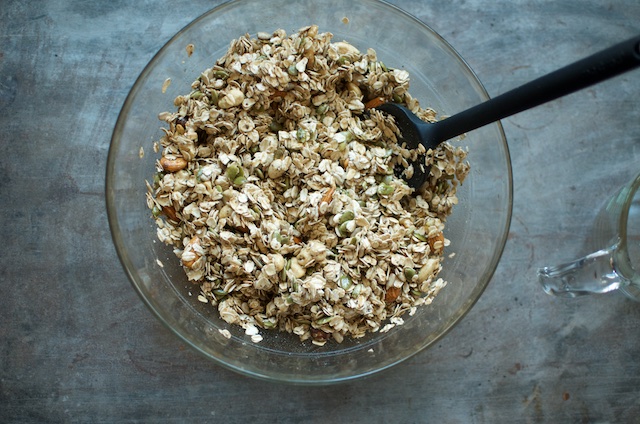 Stir it all together until the liquid ingredients are evenly distributed. 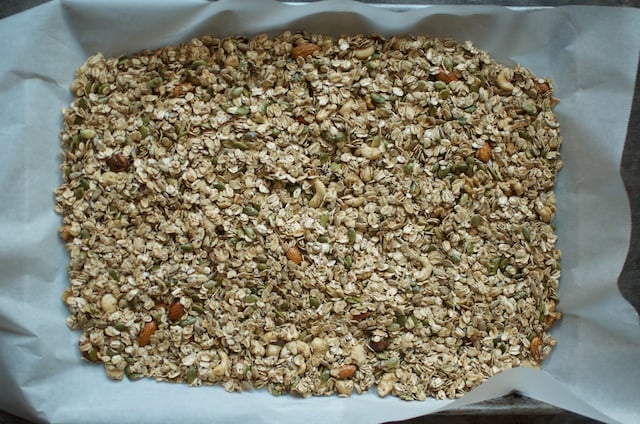 Spread it out evenly on a parchment-lined baking sheet and bake at 300 degrees F for 35 to 40 minutes, turning the mix every ten minutes or so to ensure even baking. 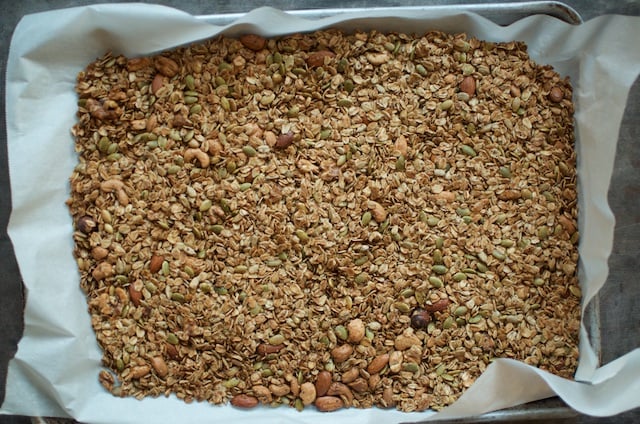 Once I was happy with the color of the toast on the oats, I pulled the pan out of the oven. To further encourage clumps, I used a spatula and compressed the hot granola. 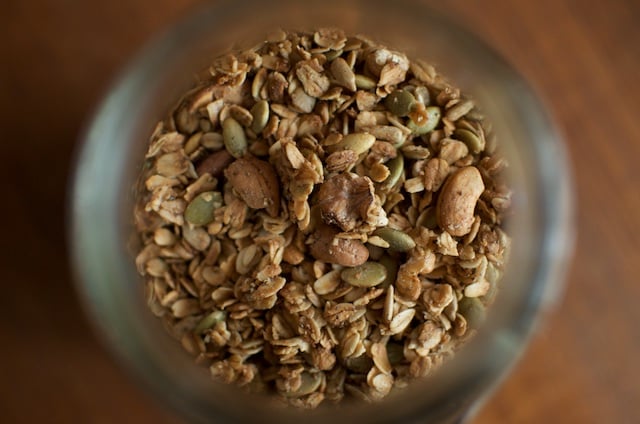 In the end, I don’t think that the chia played a huge role in creating clumps. However, I do feel like this batch of granola is crisper and has retained its crunch better than granolas I’ve made in the past. And since it does add a bit of extra nutrition, I think this will be a regular addition to my homemade granolas going forward.