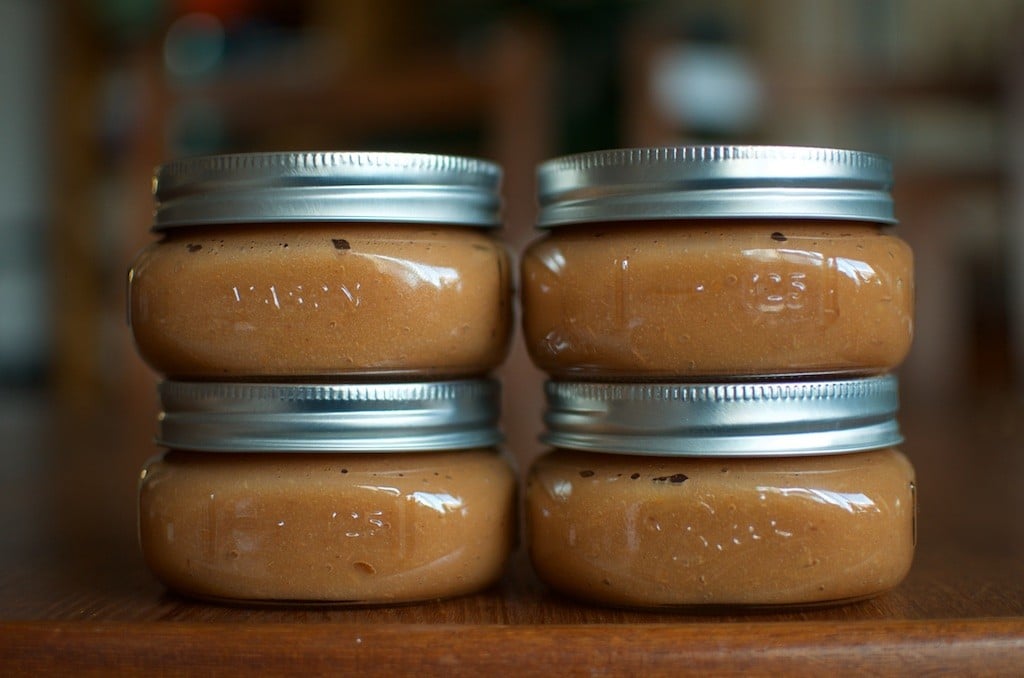 My family got our first immersion blender when I was in middle school. I can’t remember where it came from, though if I was forced to guess, I’d bet that it was a gift from my grandmother. While she didn’t cook much herself, she garnered a great deal of pleasure from buying culinary appliances and giving them to others (probably in the hopes that they’d prepare something for her with it). 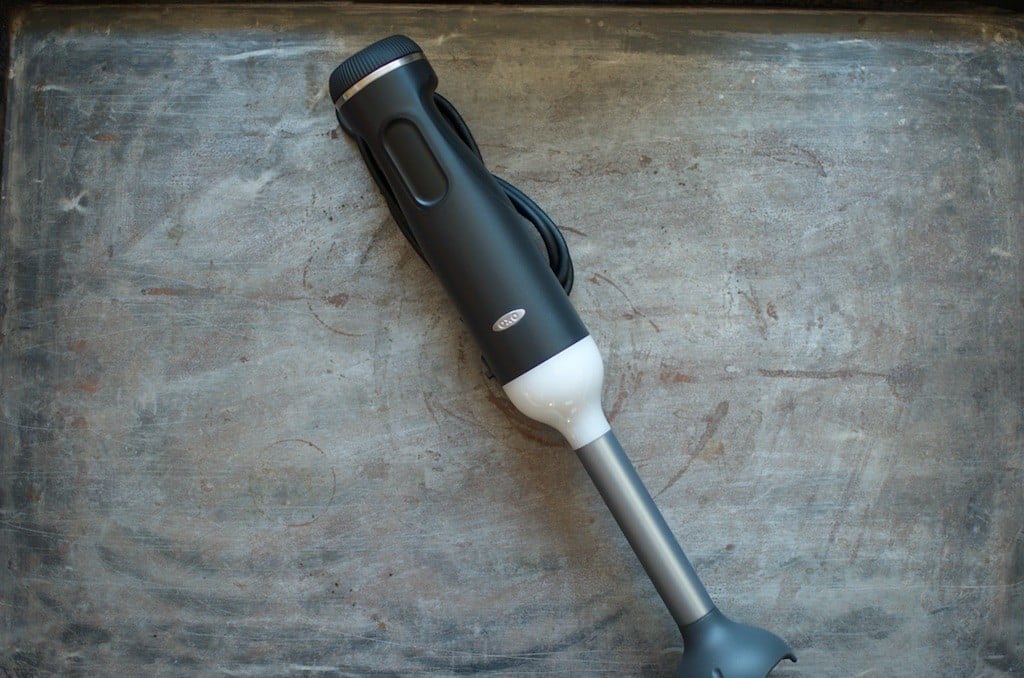 My sister and I claimed that immersion blender as our own, using to make jam and yogurt smoothies for breakfast and after school snacks of skim milk and chocolate SlimFast (it was the nineties, after all). Since then, there’s rarely been a time when I didn’t have an immersion blender in my kitchen. 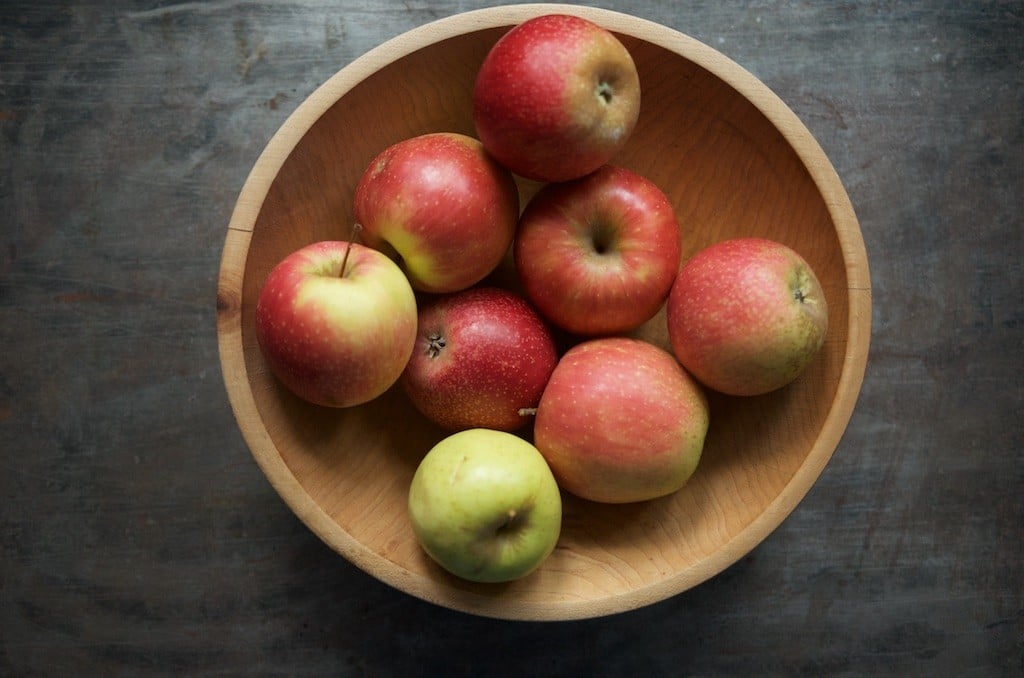 These days, I pull out my immersion blender on a near-daily basis and use it for soups, purees, fruit butters, jams, gravies, salad dressings, and mason jar mayonnaise. When I heard that OXO was bring a new immersion blender to market, I was excited to check it out because I knew that my current immersion blender was nearing the end of its lifespan and OXO products are always so thoughtfully designed [EDITED TO ADD: OXO has discontinued their immersion blender. It’s a shame because it’s an excellent tool. Mine is still going strong]. 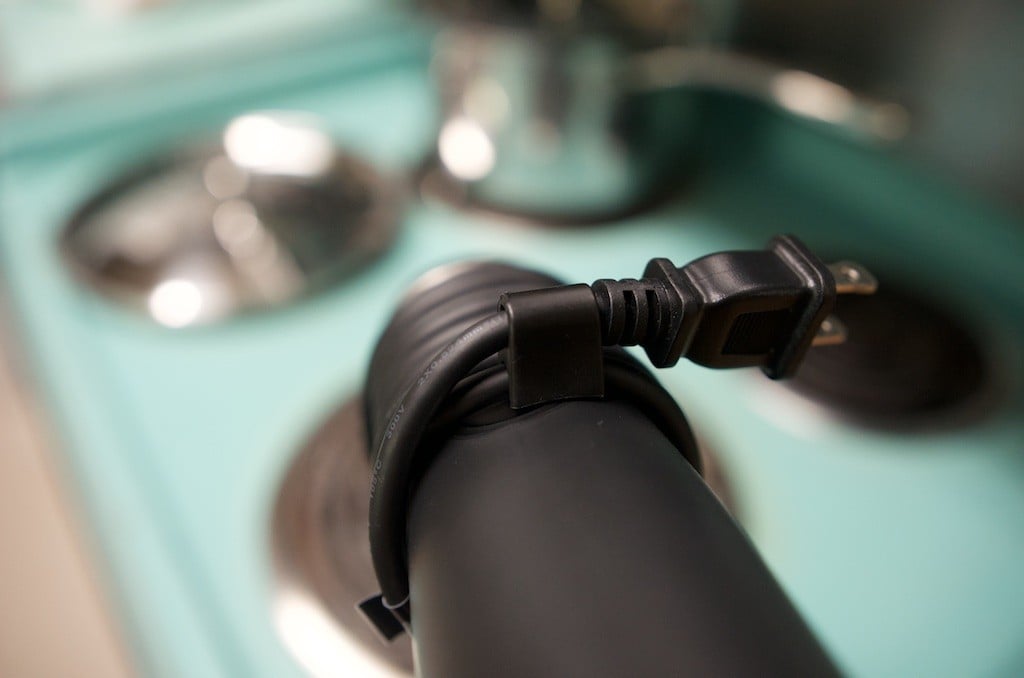 Guys, the OXO immersion blender is even better than I had hoped. The blender head is made of sturdy nylon, which means you don’t have to worry about scratching your bowls or cookware with metal. The shaft is coated in silicone, so that you can knock the drips of the blender without dinging the edges of your pan (I have a few pots that are pockmarked from repeated immersion blender banging). The blending end removes from the motor with the press of a button. The motor end has heft and the DC motor produces a lot of power. 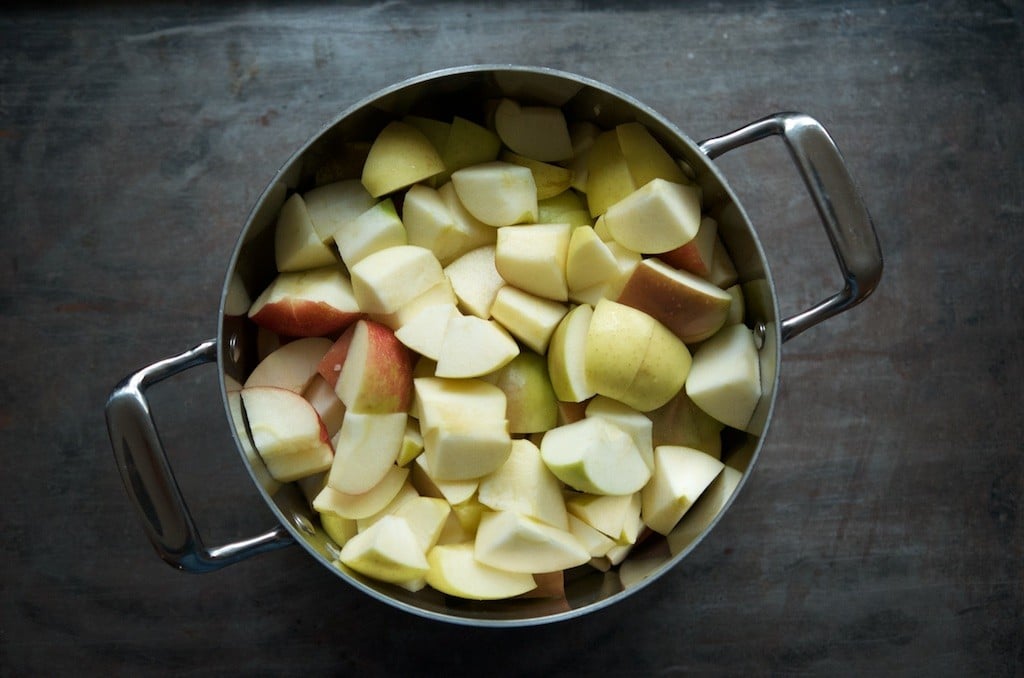 No matter what speed you’re on, the blender starts slowly to prevent splashes and then ramps up to whichever of the six speeds you’ve set it at. The speeds are controlled digitally and you can set them using the dial on the top of the blender. The cord comes with a useful clip on the end, so that you can wrap it around the handle and secure it in place. The wide power button is easy to press and hold. Oh, and let’s not forget about the headlight, which illuminates whatever you’re blending. On my dark stovetop, this is so useful. 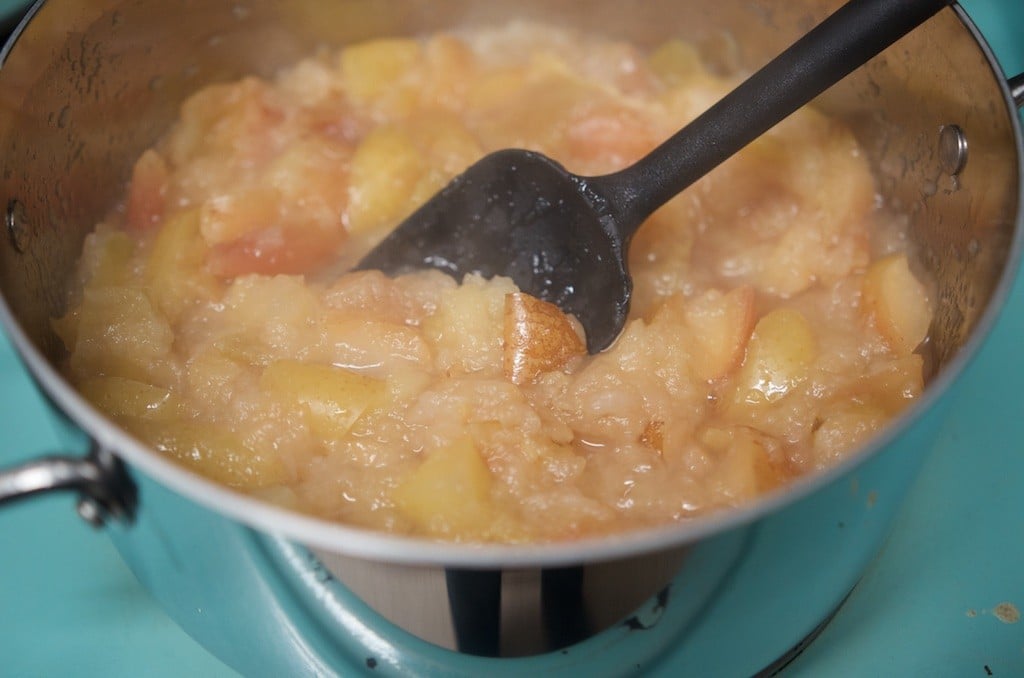 For its maiden voyage in my kitchen, I used this lovely immersion blender to make a batch of Maple Bourbon Apple Butter. Wanting to really test it, I cored and chopped five pounds of apples, but left the peels on (unlike this recent butter, where I peeled). In my experience, not all immersion blenders can break down even long-cooked apple peels, but this one handled it like it was nothing. 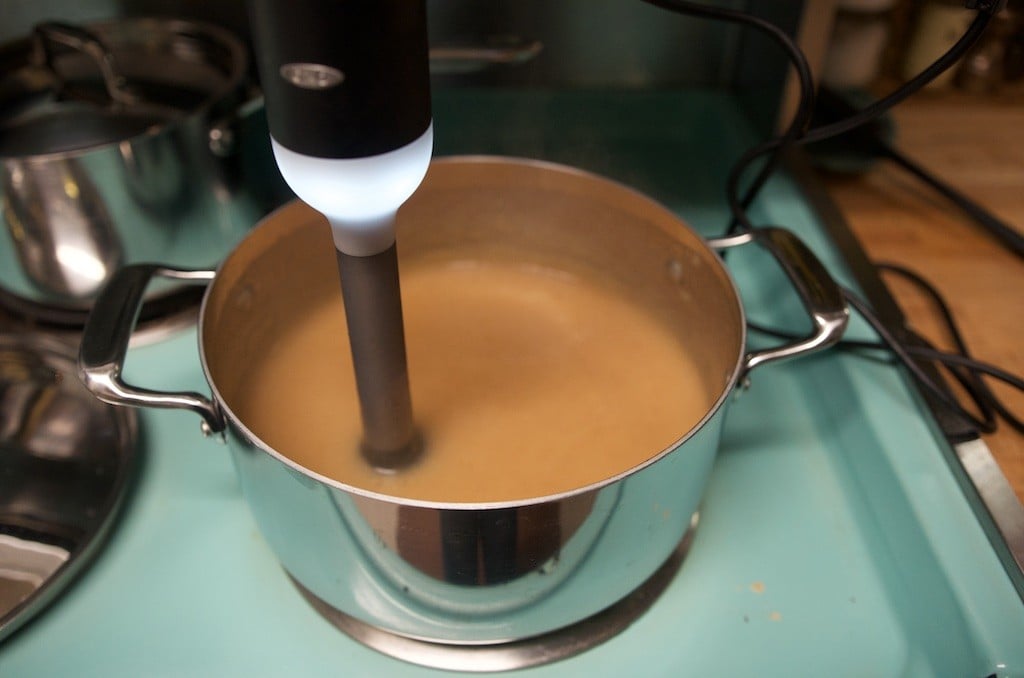 No matter how large or small the batch size, I use a two-blend process when I make apple butter. I cook the fruit down into a soft sauce, puree the heck out of it, cook it down until it thickens and darkens, and then work it with the immersion blender again.

The reason for the second puree is two-fold. First, the peels aren’t always quite soften enough to disappear during that first round of blending. Second, most fruit butters clump a bit while you’re cooking them down, and I prefer a super smooth butter. Pureeing just before the butter goes into the jar ensures that silky texture. 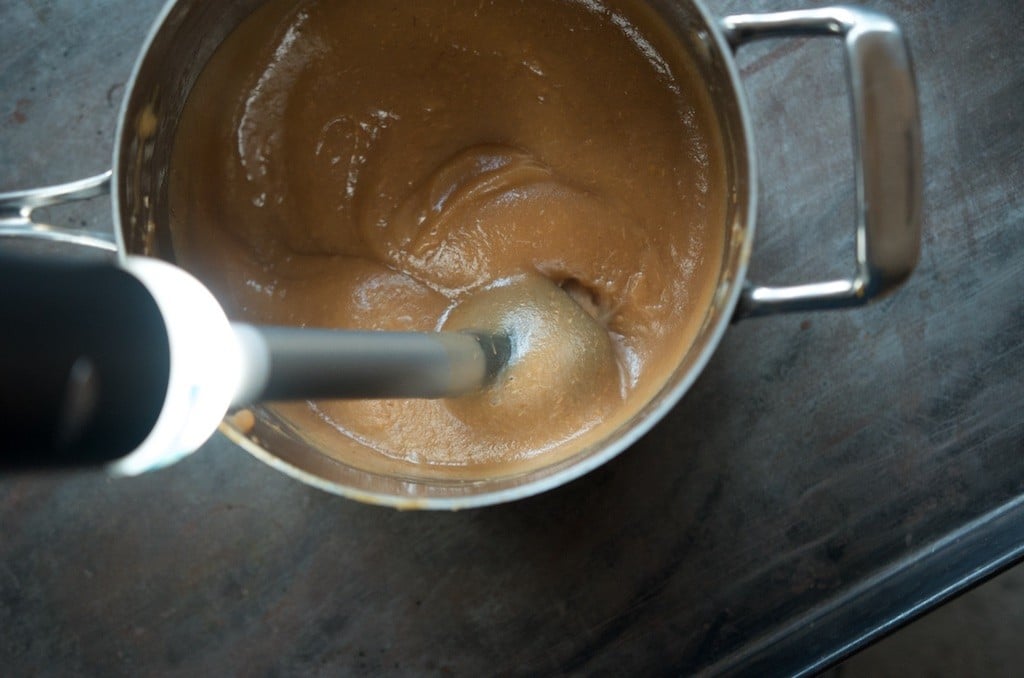 As the fruit was cooking down, I spent a little time pondering flavorings. I have plenty of spiced apple butters on my shelves, and wanted to opt for something different here. I know that the combination maple, bourbon, and orange zest isn’t a particularly novel one, but combined the richness of the long-cooked apples, was just the thing I was craving. My plan is to keep two of the jars for myself, and tuck the remaining two into gift baskets for people I know will appreciate it. 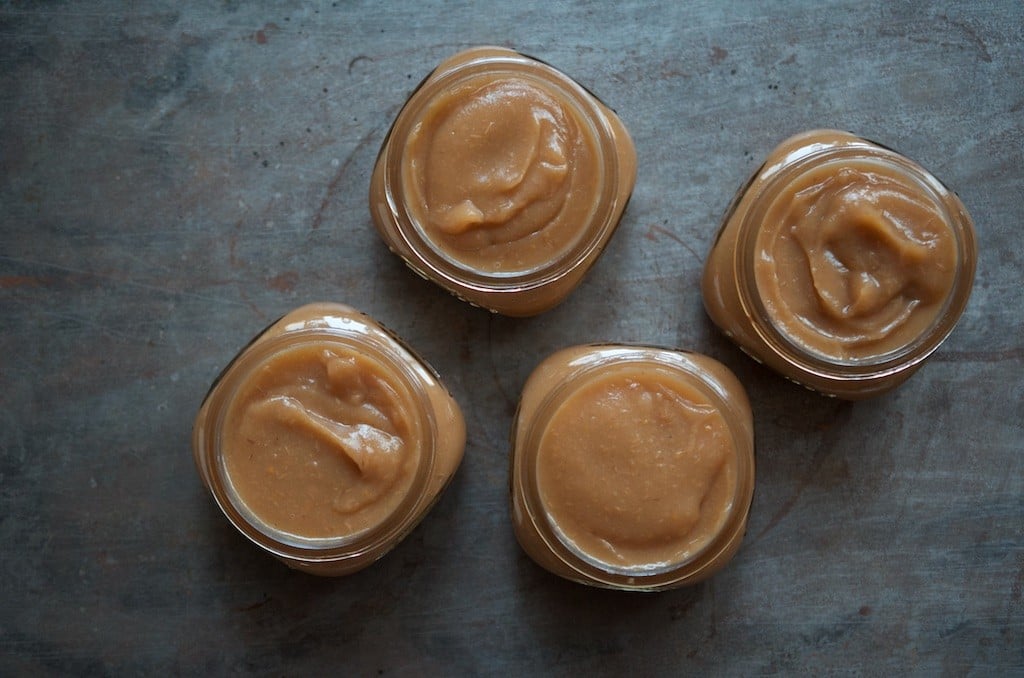 Disclosure: OXO sent me this OXO On Illuminating Digital Immersion Blender to try and write about. No additional compensation was provided. All opinions expressed are entirely my own. 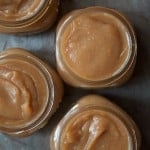