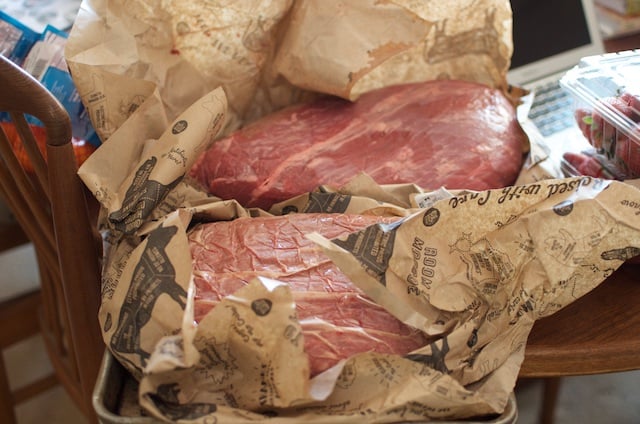 About four years ago, I became the official brisket maker for my family’s Passover Seder. I’m not the most natural fit for this role, particularly since up until the time I moved to Philadelphia, I’d only ever attended Seder in the all-purpose room at our Unitarian Universalist church. 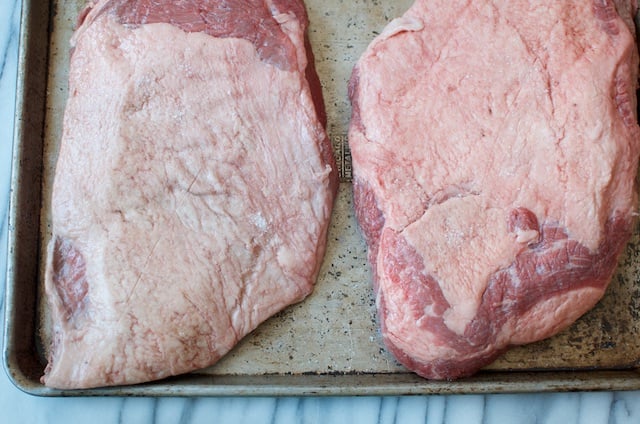 I started dabbling in brisket making during the years when Scott and I were regularly filming episodes of Fork You. We did one episode in honor of Philadelphia’s beer week, in which I braised a smallish brisket in a slurry of sauteed onions, herbs, and a generous pour of dark beer. 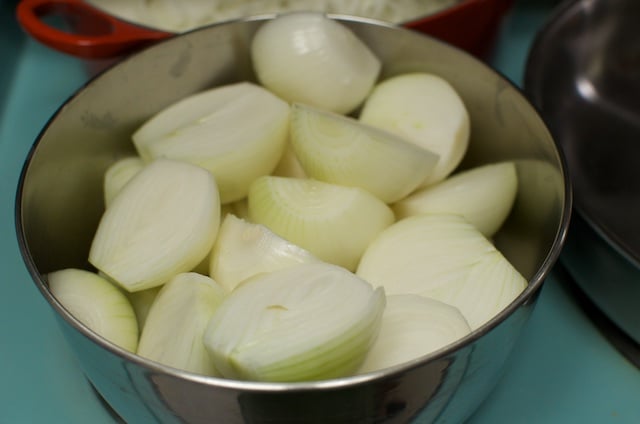 For the longest time, that beer soaked method was my favorite. However, once I took on the task of making brisket for Passover, the beer had to go because fermented grain products (like beer) are most decidedly not kosher for Passover. And while my people aren’t particularly observant, using that as my braising medium seemed a step too far. 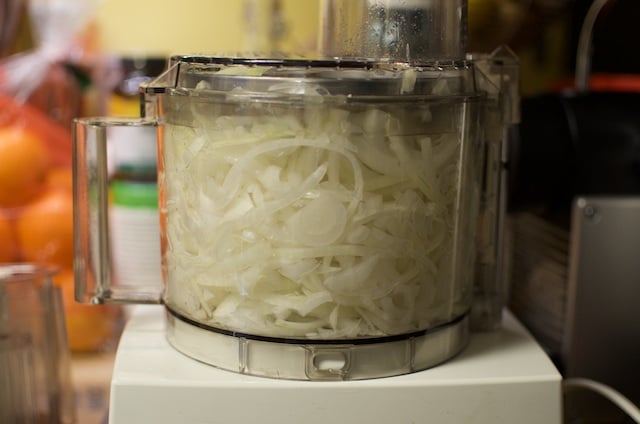 Since this year is my fifth brisket adventure, I thought I’d take a few minutes to write about the process (I actually took these pictures last year, intending to write this post then). It’s not hard to do, but it is time consuming. I always start the day before I plan on serving the brisket. This allows me to remove the bulk of the fat that the meat releases and truly, things just taste better the second day. 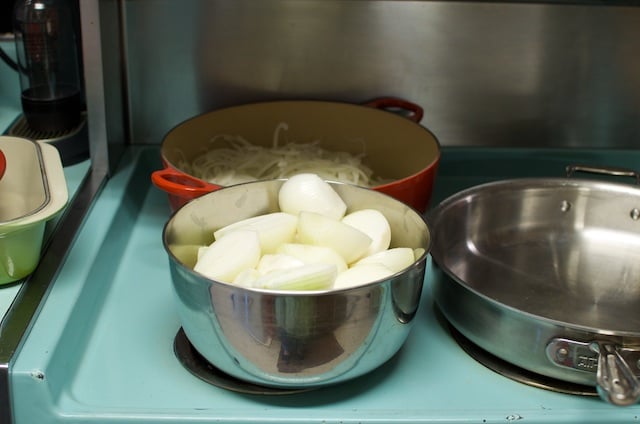 My current approach is relatively simple but time consuming. I start with one pound of brisket for every two people I’m feeding, plus a little more just in case. This year, we’re expecting 18 people, so I started with 10 pounds of brisket (if the pieces have a substantial fat cap, I suggest buying even a little bit more). 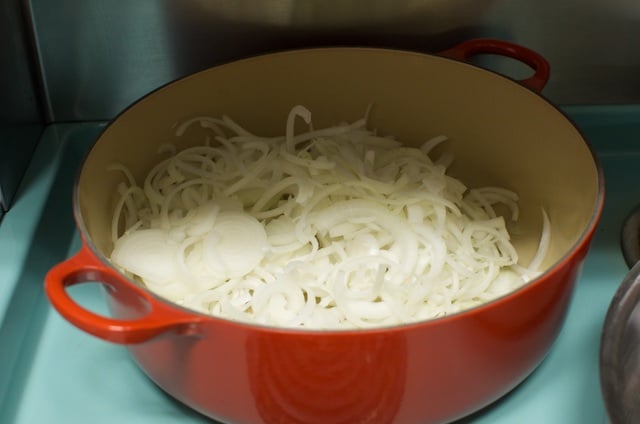 I use one pound of onions for every two pounds of brisket. They add a ton of flavor and lend substance and body to the eventual sauce. In the beginning, I sliced those onions by hand, but by year two, I got smart and pulled out the food processor. It’s still not easy on the eyes, but it is a lot less tedious. 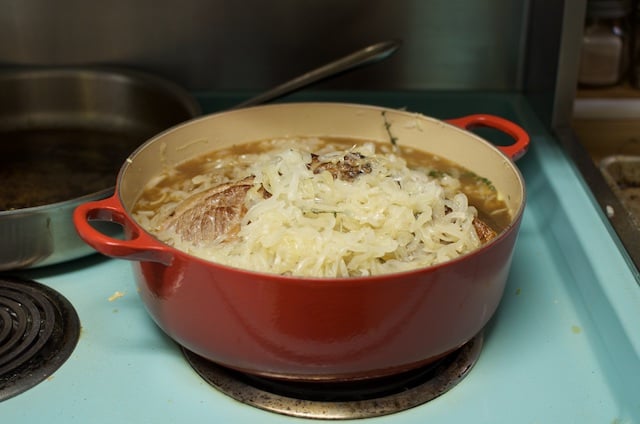 To brown ten pounds of brisket, I pull out two large pans and heat some oil with a high smoke point until it shimmers. Salt and pepper the brisket pieces (to get ten pounds, you end up with at least two big pieces) and brown them on all sides. Once the brisket is nicely browned, they get pulled out and I saute the sliced onions in the fond from the meat. 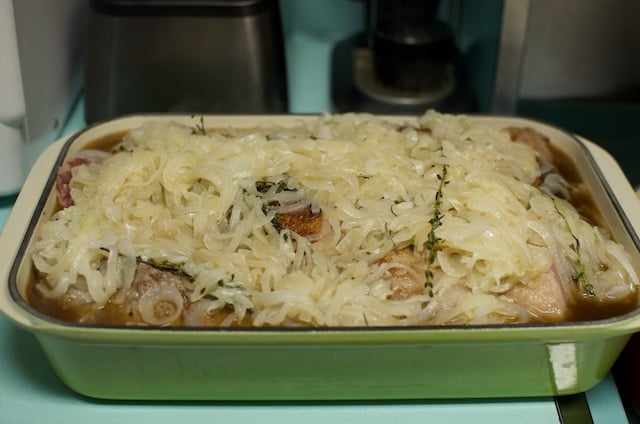 Once the onions are done, I put a little down in the bottom of the pans I’m using for braising. Because of the amount of brisket I make, I tend to divide them between a low, wide Dutch oven and a large cast iron roasting pan so that I can fit them all into my oven. 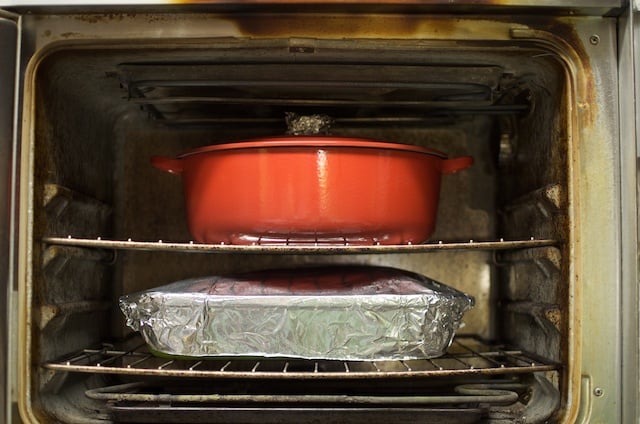 I pour beef stock in so that it comes up most of the way up the sides of the meat. Finally, I arrange the remaining onions on top of the meat and tuck sprigs of fresh rosemary and thyme into the pans. I cover both pans and cook them in the oven for 3 to 4 hours at 300 degrees F. They’re done when you stick a fork into the center of the meat and it feels tender instead of tight. 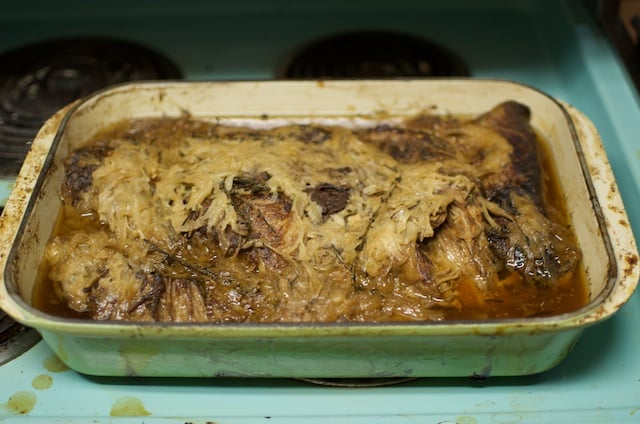 Once the brisket is finished braising, I let everything cool down. Then I separate the beef from the sauce and refrigerate them both separately.

A few hours before I want to serve the brisket, I remove the container of braising liquid from the fridge. I pull off the fat that collected (keep it and roast potatoes in it later) and I push everything through the fine screen of a food mill. This removes all the woody herb bits. Then I pour the milled liquid into my crock pot and taste it. I’ll add a little balsamic vinegar and salt, if necessary. If it feels too granular, I’ll sometimes zap it with an immersion blender. 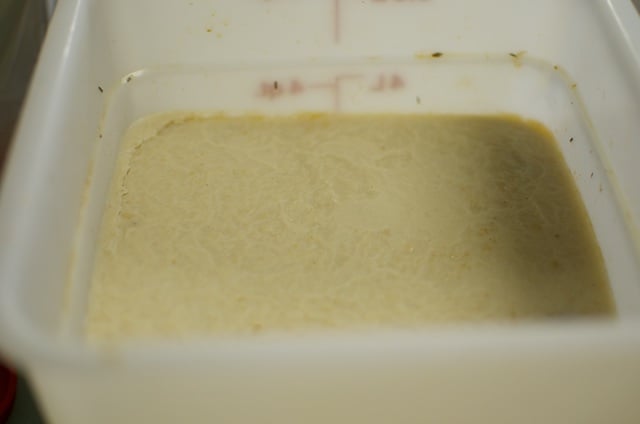 The last thing is to cut the brisket against the grain and add the pieces to the sauce. This way, it heats slowly and never develops any of that funky, reheated meat taste. Special occasion food, at its finest! 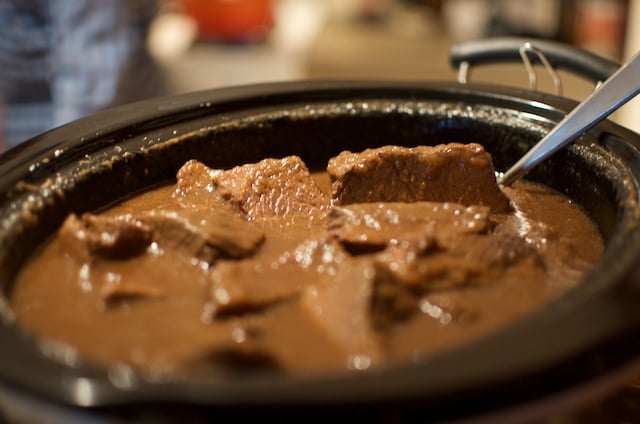 4 thoughts on "Making Brisket for Passover"