I am currently in a motel room about an hour north of Pittsburgh, PA. My class in Columbus yesterday went gloriously well (so many thanks to The Seasoned Farmhouse for having me!) and my appearance on All Sides with Ann Fisher earlier today was so fun (you can watch it or download the podcast here).

The upcoming weekend in Pittsburgh got some really nice coverage in the Post-Gazette today. If you’re in the area, please do come out and say hi! 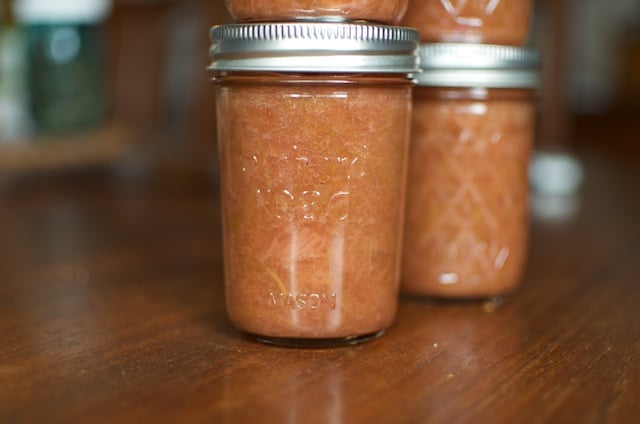 Happily, this blog post isn’t only about what’s happened over the last few days and what’s to come later this week. I also have a recipe for honey sweetened rhubarb compote with ginger. This particular preserve doesn’t have much of a story behind it. It was one of those ideas that sprang fully formed into my brain and I knew I wouldn’t be able to stop thinking about it until I made it.

I used two forms of ginger (freshly grated and juice. I used this bottled juice, but instructions on how to make your own can be found here) to make it kicky, and had I been able to find my jar of crystalized ginger, I would have included some chopped bits as well (how does one misplace a pint jar of ginger?), but the kitchen is a bit of a mess these days and I just couldn’t put my hands on it.

Still, even without the third form of ginger, it’s quite good. I had intended it to be something closer to a jam, but it refused to thicken beyond a very soft set, and so I’m calling it a compote in order to set consistency expectations. You can call it whatever you’d like. 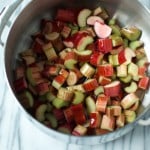