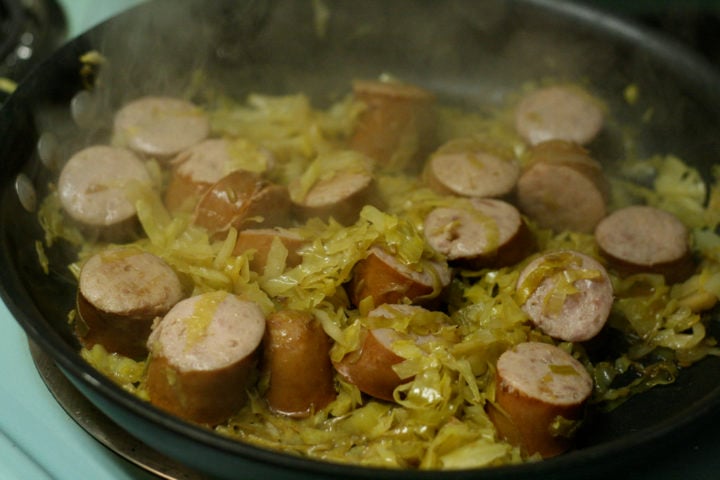 Last October, Scott and I filmed an episode of Fork You with Scott Gryzbek of Zukay Live Foods. Zukay makes a line of probiotic condiments and Scott (Gryzbek) came on the show to teach us some basic fermentation techniques. We made pickled daikon, an apple-pear chutney and sauerkraut. The episode was really fun to film and it piqued my interest for fermentation as a means of preservation.

Unfortunately, I let the chutney ferment a little too long and the sugars turned to alcohol, so we never got to taste that one. However, both the pickled daikon and the sauerkraut were huge successes. We polished off the daikon some time ago, but the sauerkraut has been hanging out in the fridge, waiting for a good application.

Sunday night, we planned a simple dinner. We had a coil of supermarket kielbasa in the fridge and two pounds of brussels sprouts that I was going to halve and roast with onions and garlic. Scott said, “Too bad we don’t have some sauerkraut.”

In a flash, I remembered the jar that was tucked in the back of the refrigerator. He sliced up the sausage and tossed it in a frying pan with about half the jar of sauerkraut. Ten minutes later, the sausage was browned and the sauerkraut was translucent and pungently aromatic. 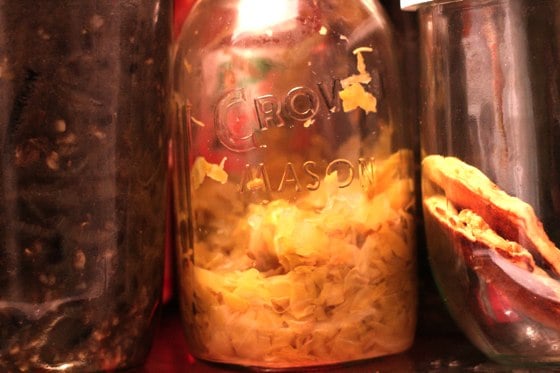 I am now totally sold on homemade sauerkraut, because it was dead easy to make and so much more delicious that anything than came from the store (and there’s something magical about cutting up a cabbage in October and not eating it until February).

We simply thinly sliced the cabbage (a nice big one from the Headhouse Square Farmers Market), put it in the bowl with a tablespoon of salt and a teaspoon of fennel seeds (we didn’t have any caraway, which is the traditional flavoring) and banged it up with a potato masher to break down the cell structure of the cabbage a bit.

Then we packed it into a jar (packed being the operative word) and topped it with a bit of distilled water (just enough to cover the cabbage). Then it just hung out in a corner of the kitchen for about a month. I put it in the fridge after that time, but I do believe that you can also let it spend a bit more time doing its thing. 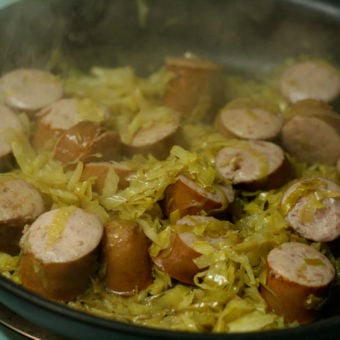