Homemade instant oatmeal is a quick, simple breakfast that the whole family can make and enjoy. One batch stashes perfectly in a large Ball® Storage Latch Jar. 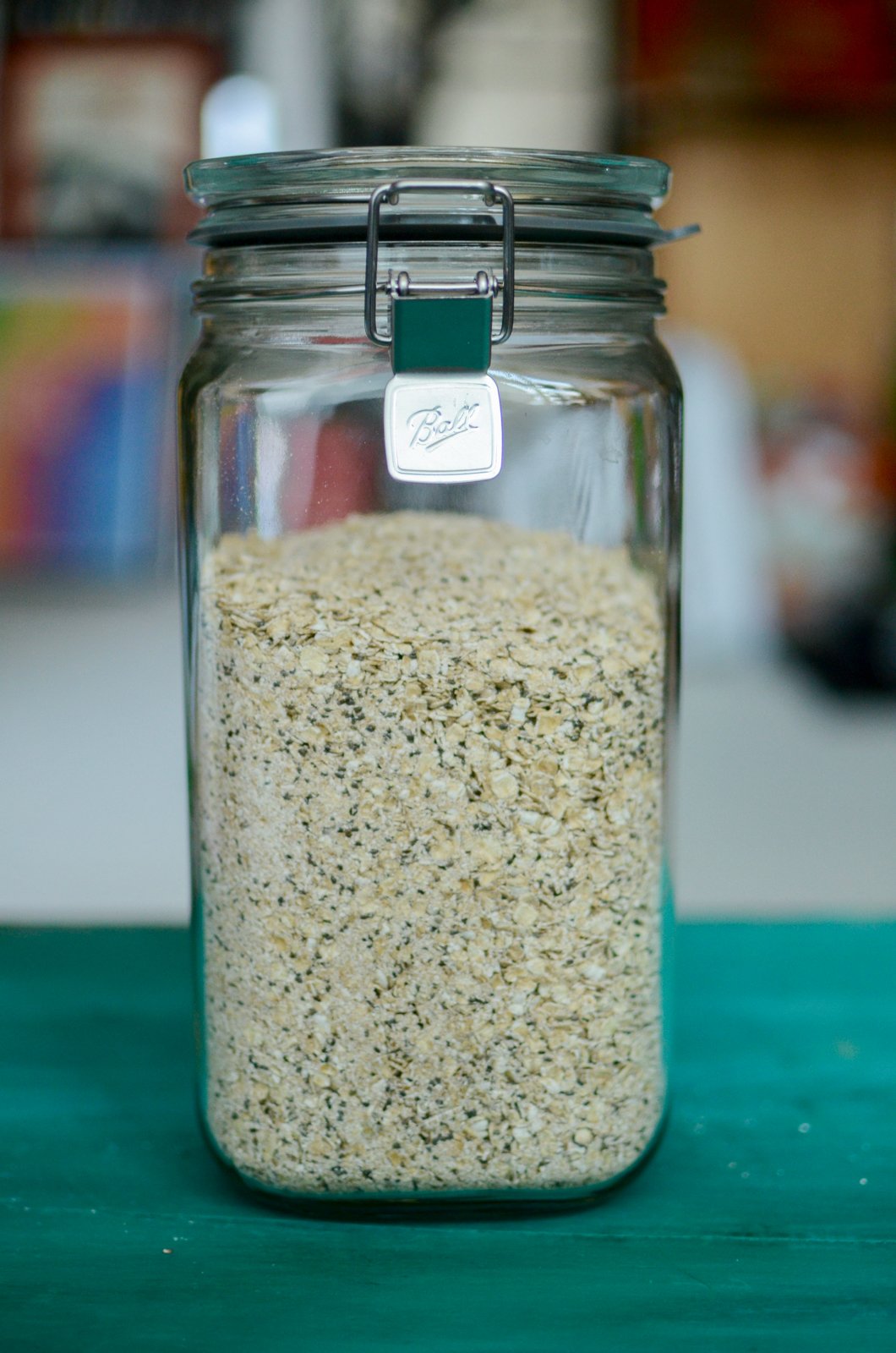 I am a Ball® Home Canning Ambassador and this post is sponsored by the makers of Ball® home canning products.

I became an instant oat convert when my twins were newborns. My husband was back at work after 6 weeks of parental leave and I was on my own with two tiny, attention-hungry infants. In the mornings, I typically had about ten minutes to make myself breakfast after their morning feedings and diaper changes and before they’d need to go down for their morning nap (which they preferred to take on my body).

It was just enough time boil a kettle, rip open a couple packets of instant oats, and make a big mug of black tea. If I was lucky, I’d also be able to slice an apple. I’d carry my speedy meal back to the couch, where I’d settle myself back into my giant breast feeding pillow, position the boys on either side and eat my meal while they nursed and then snoozed. 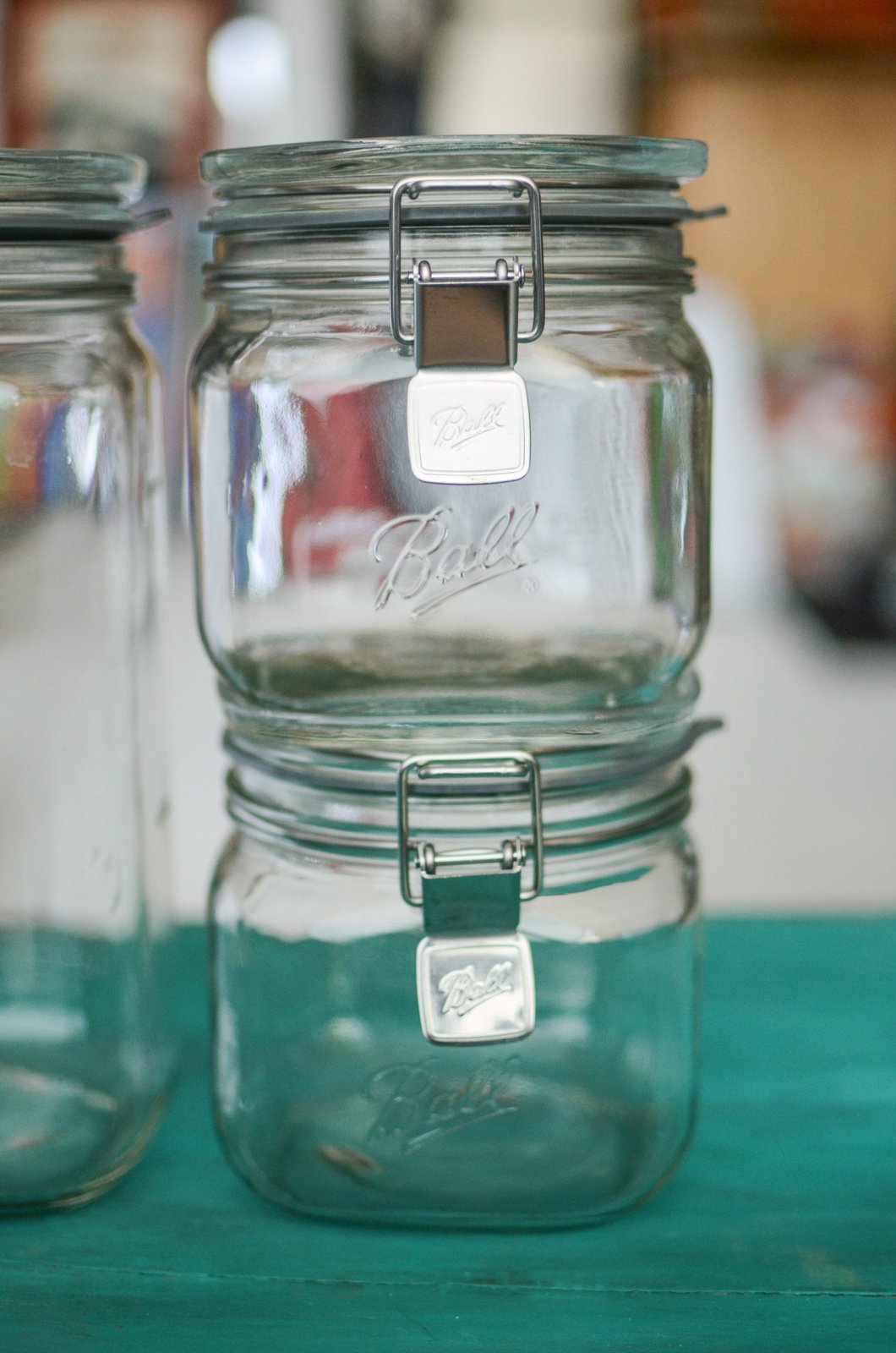 These days, my twins are nearly two, but I still depend on instant oats for quick morning meals. Instead of tearing open a packet, I mix up large batches using quick cooking oats, homemade oat flour, chia seeds, maple sugar, and cinnamon. It replicates the flavor of store bought maple cinnamon oats, but for far less money and less packaging too!

I’ve taken to keeping my homemade instant oats in one of the new Ball® Storage Latch Jars. I use the large jar, which holds 9.9 cups. My batch makes just over 8 cups of oats, which means that this jar holds it all,  with room to spare for a scoop for easy portioning. These fab, stackable jars also come in a smaller version, which holds 4 cups. I’m currently using two of those to hold the raisins and sliced almonds that I put on top of my oats. With the tea kettle close by, it becomes a really handy one-stop breakfast bar. 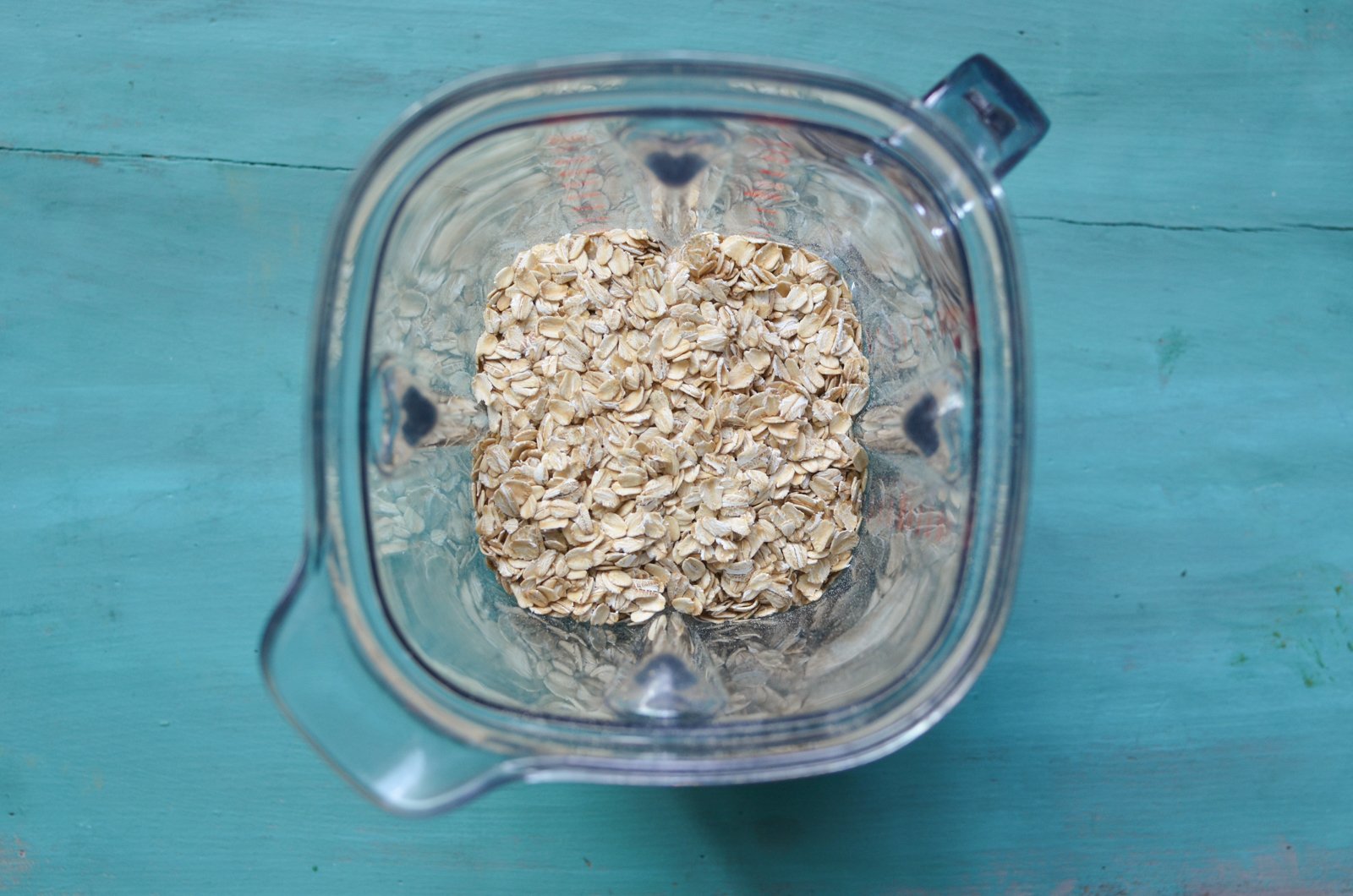 These oats are really easy to make. You start by putting 2 1/4 cups of rolled oats into the blender. Then you blend until they break down into flour. I don’t just use this trick for instant oats. I make oat flour all the time to use in quick breads and little cakes. It’s a great way to affordably and easily incorporate whole grains into your diet (this Maple Sweetened Banana Oat Cake is one such example!). 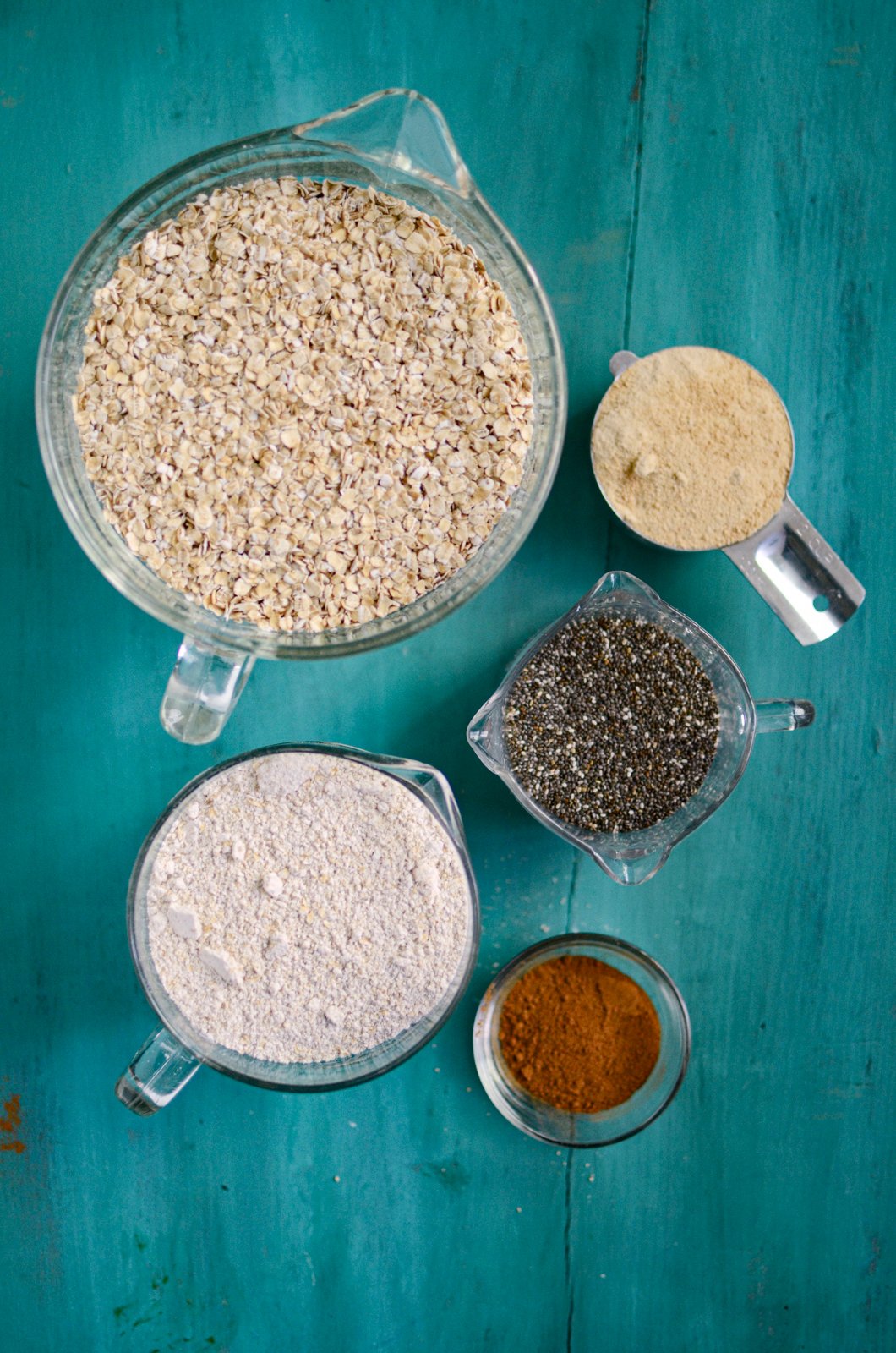 Then you need about four cups of quick cooking oats. I typically buy these rather than trying to make them. If you’re not shopping in the bulk section, this is typically a whole grocery store canister of quick oats.

In addition to the oats and oat flour, you need 3/4 cups chia seeds, 1/2 cup maple sugar (cane or brown sugar also works, you just won’t get the flavor of maple in the oats), and 1 tablespoon cinnamon. 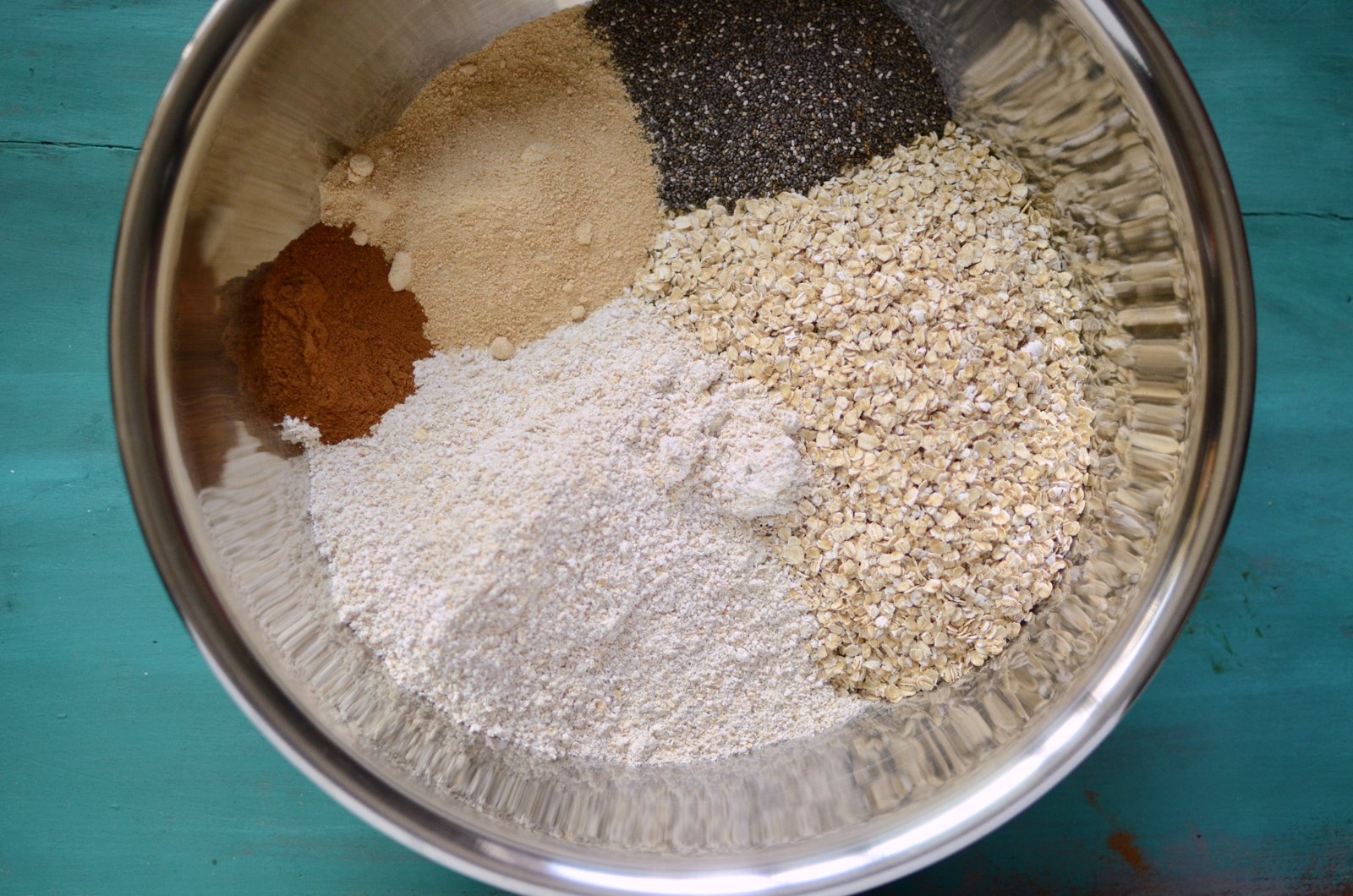 Place all the ingredients in a large bowl and use your largest whisk to combine. Of course, you can vary up the spices and sweetener level to satisfy your own taste preferences. I’ve also made this with vanilla powder and pumpkin pie spice, which are both quite delicious. 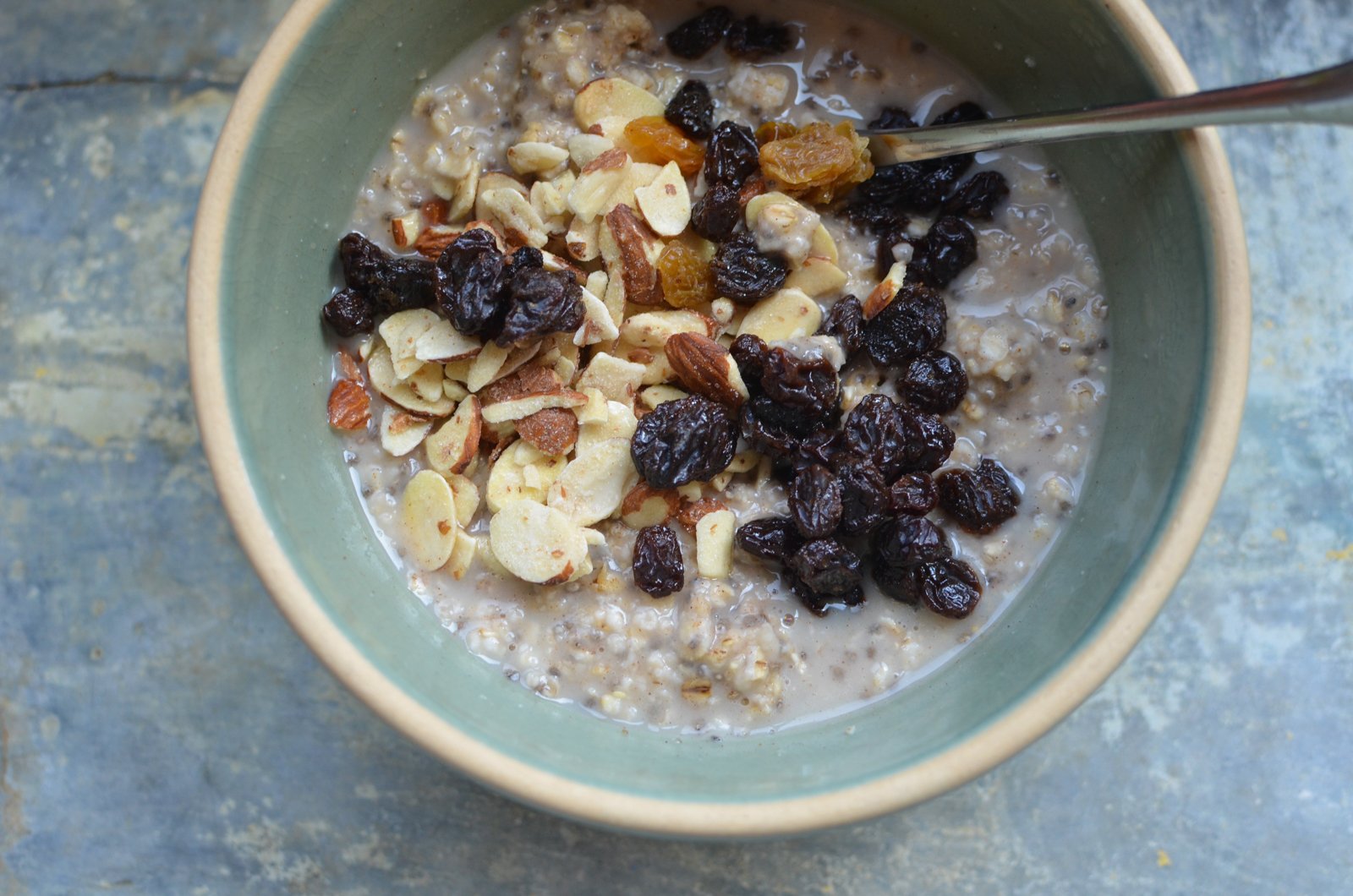 To make the oats, I portion a scant half cup of the instant oat mixture into a heatproof bowl and top it with a cup of boiling water. I put a sandwich plate on top of the bowl to trap the heat and set a timer for five minutes. When the time is up, the oats are ready to eat. I like to stir in a little milk and top my bowl with sliced almonds and raisins. Once the summer berries and stone fruit start, I’ll swap those in for the raisins.

For those of you looking to use up your homemade preserves, you can always swirl in a spoonful or two of apple butter, strawberry jam, or a chunkier compote. It’s your bowl, so be creative! 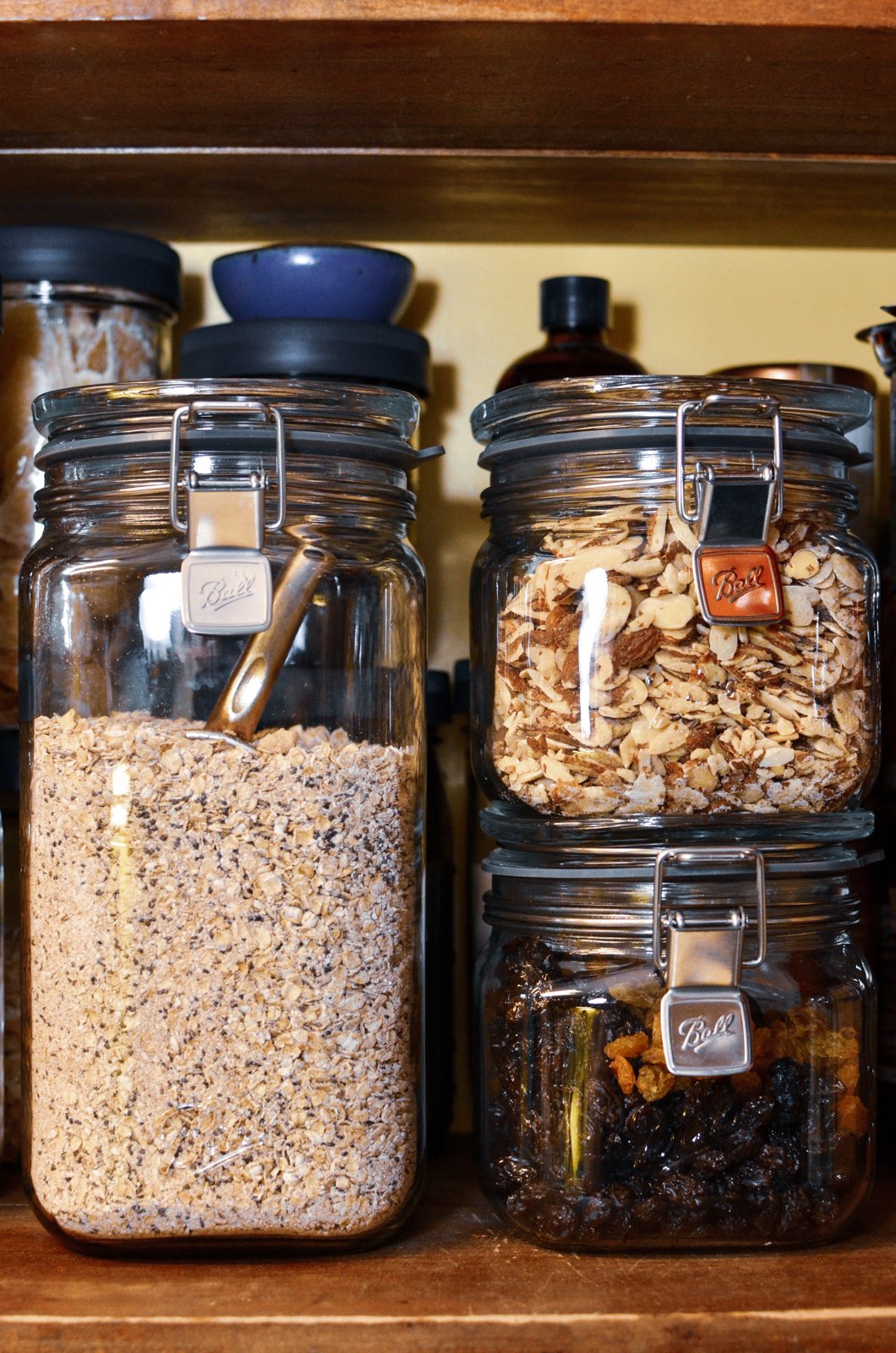 How would you use a set of these Ball® Storage Latch Jars? Would you stash your oats in them too? Or would they serve a different purpose in your kitchen?

Disclosure: This is a sponsored post that is part of an ongoing partnership with the Fresh Preserving Division of Newell Brands. They have provided jars, equipment and monetary compensation. All thoughts and opinions expressed remain my own.

If you prefer, you can also prepare these oats in the microwave. Use 1 cup of cold water for every 1/2 cup of oat mixture, and microwave on medium power for 2 1/2 to 3 minutes. Let the oats stand for five minutes before serving.