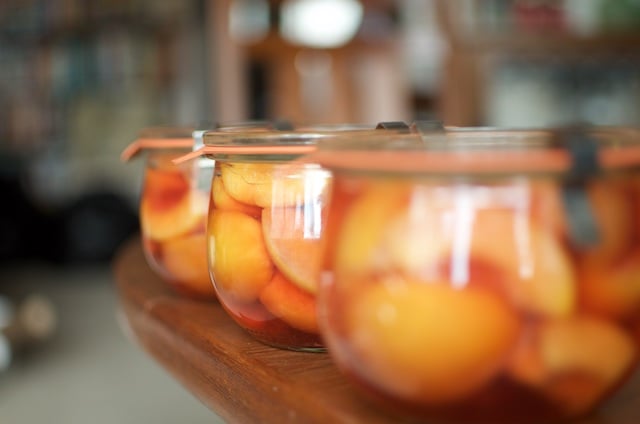 There is a park near my apartment that hosts two weekly farmers markets. I almost always go to the Saturday market, but often miss the mid-week one. It takes place on Tuesdays from 10 am to 2 pm and so often, by the time I remember that it’s happening, I’ve already missed it. 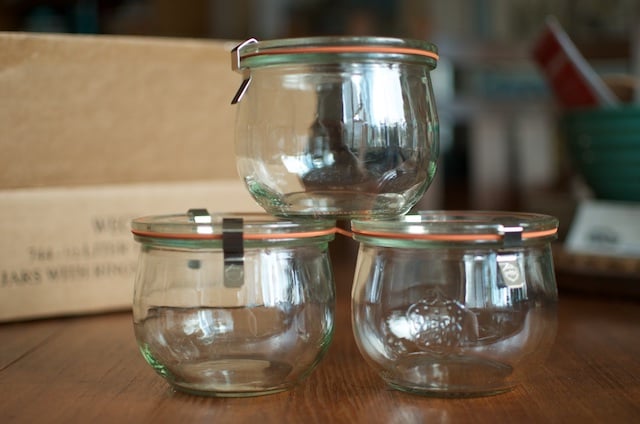 Last week, though, the stars were aligned in my favor. I had been out running errands and on my walk home spotted the cheery row of white tents set up along the north edge of the square. It was nearly 2 pm, but the vendors all still had good things on offer. I bought three quarts of yellow and green beans for pickling, a half pint of black raspberries, and five pounds of hail-marked peaches for $5. 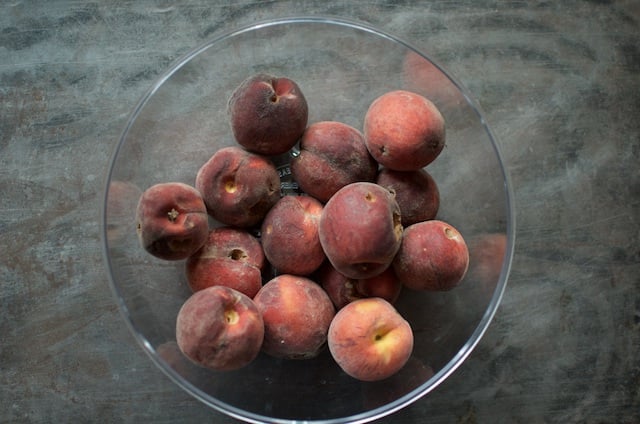 The peaches were a little beat up but it was nothing some careful work with a paring knife couldn’t fix. I set them out to ripen for a couple days and applied myself to the rest of the produce. I trimmed the beans, fit them into a large jar with garlic and spices, and covered them with brine (we’ll talk more about those next week when they’re finished fermenting). The raspberries? Those I ate with my lunch. 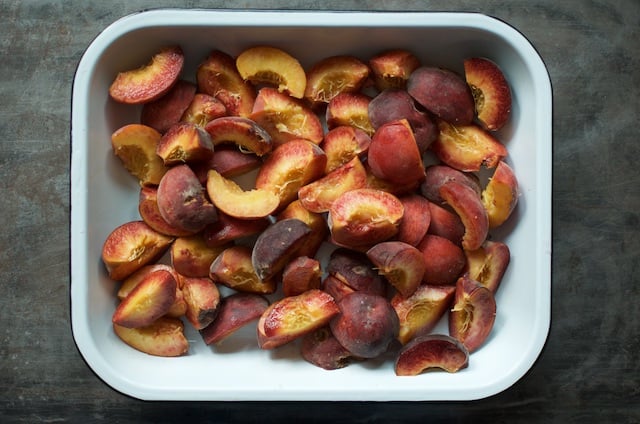 A few days later, the peaches were ripe and ready for canning (and eating! I did set aside a few for snacking). I considered turning them into jam, but I just discovered a cache of peach vanilla jam in the back of the cabinet, so that seemed unnecessary. Instead, I decided to can them in fruit juice for later in the year when all available fruit is being shipped from the other side of the world. 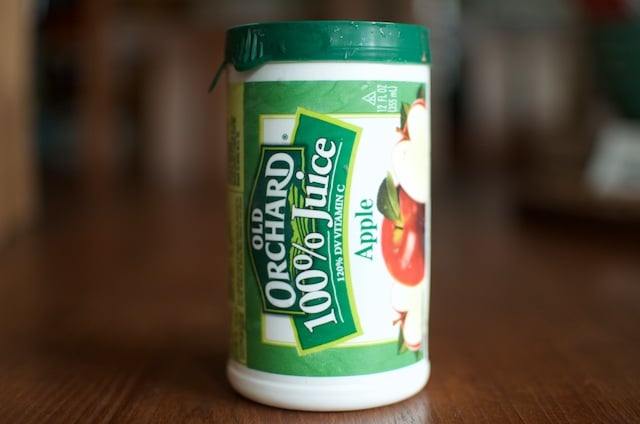 Over the years, I’ve preserved fruit slices in syrups made from cane sugar, honey, and agave nectar, but when it comes to ease and virtue, there’s nothing better than plain old apple juice. When I first started working on my natural sweeteners book, I got into the habit of keeping a few canisters of 100% juice concentrate in the freezer because they’re so useful during canning season. 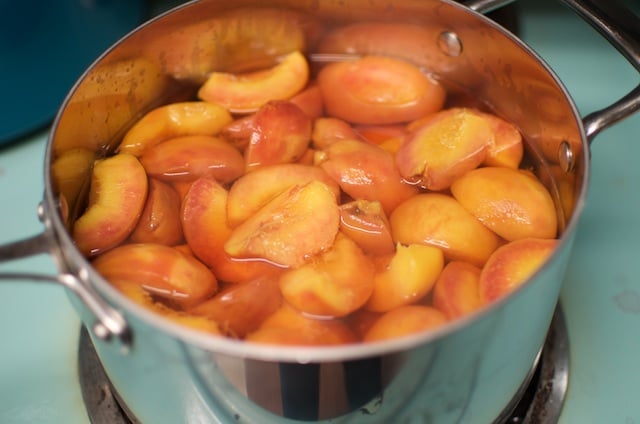 I prepped the peaches by cutting them in quarters and laying them in a heatproof baking dish. Once they were ready, I put the pan in the sink (to help prevent large messes), brought a kettle of water to a boil and poured it over the peaches. This helps loosen the skins and when you’re working with relatively small amounts of peaches, makes for an easier peeling process. 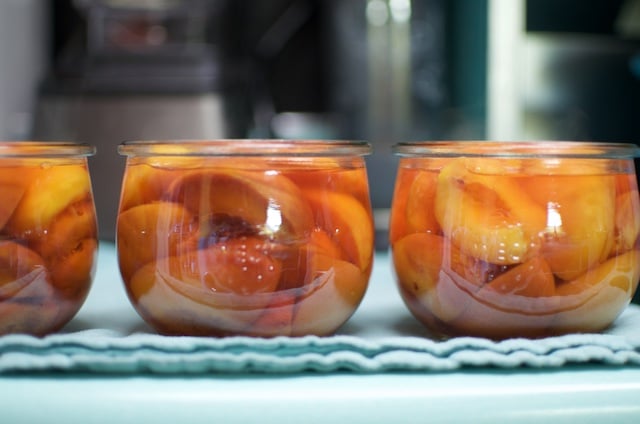 Once the peach quarters had sat in the hot water for about three minutes, I lifted a corner of the pan and tipped out most of the hot water. Then I ran some cool water from the tap over the fruit. Then, I peeled the skins off the peach segments. They lifted away easily enough, though some benefited from a little paring knife assistance. 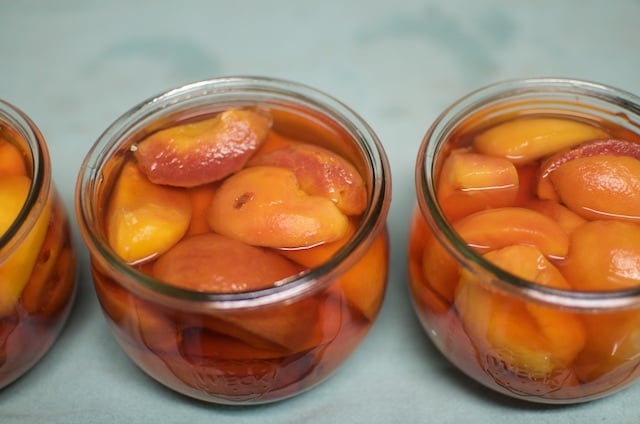 I’d prepped the juice ahead of time (using the regular dilution of one can of concentrate to three cans of water) and brought it to a simmer in a four quart pot. After each peach segment was peeled, I dropped it into the hot juice. The acid content in the juice is enough to help prevent oxidation, and the heat helps the fruit release some of its trapped air, making for a finished product that should siphon less that peaches that were done using the cold pack method. 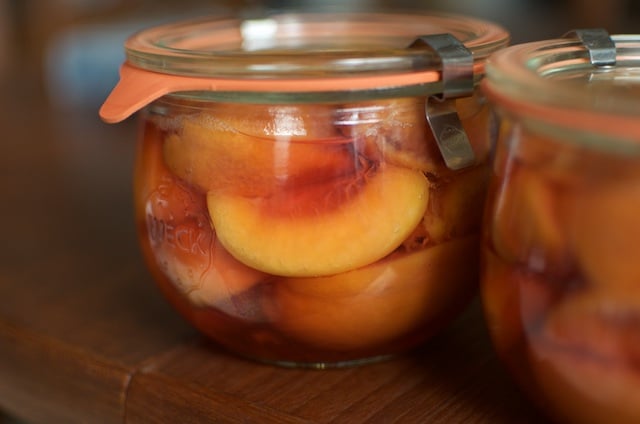 Once all the peaches were peeled and in the simmering juice, I pulled three clean, hot 1/2 liter Weck tulip jarsout of my prepped canning pot and filled them with peach slices. I ladled in enough juice to cover, leaving about 1/4 inch headspace (make sure to wiggle out any trapped air bubbles).

Finally, I wiped the rims, eased on the seals and lids, and clamped them in place with the metal clips. Because they were a hot packed product, these jars (which are the functional equivalent of pint jars) spent just 20 minutes in a boiling water bath canner. 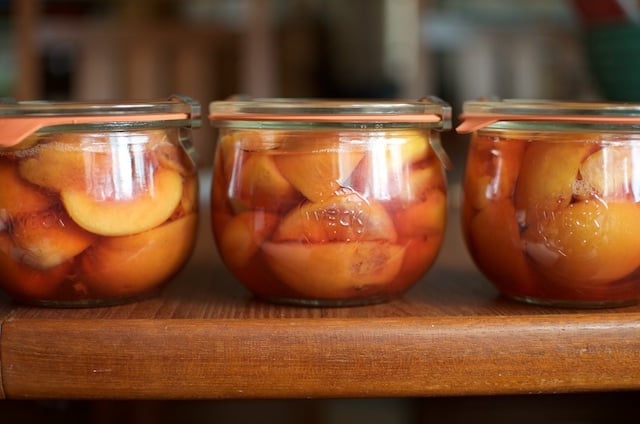 Once the time was up, I slide the pot off the hot burner, removed the lid, and let the jars cool for ten minutes still in the water. This is another way to help prevent the siphoning of the liquid to which whole fruit is so prone.

Finally, I pulled the jars out of the water and let them rest on a folded kitchen towel. You can always tell with Weck jars that they’ve formed a seal because the little rubber tab will point downward. 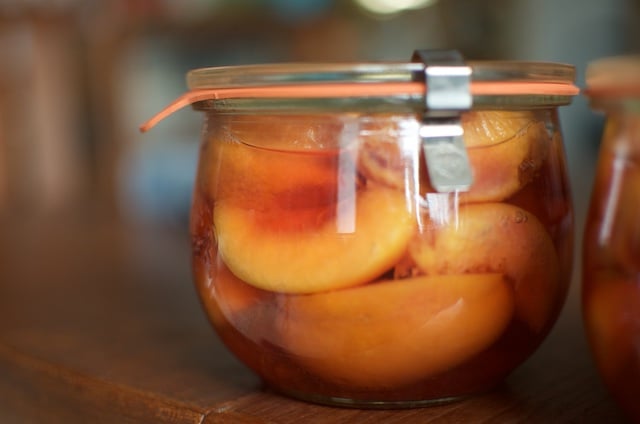 And there you have it! Peaches packed in all-natural fruit juice. Delicious in January (or anytime)! 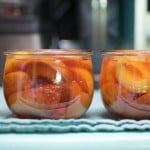 For more exotic peaches, tuck a section of vanilla bean, a cinnamon stick or a bit of star anise into each jar. For something boozy, you can add a dash of bourbon or whiskey to each jar. This recipe can be easily increased. As written, you will have a cup or two of juice leftover, so you can certainly add a pound or two of fruit without increasing the volume of fruit. Once you venture beyond six or so pounds of fruit, you will need more juice.