Scott Lindenhurst is the creator of Sauce Authority and is avid hot sauce aficionado. For nearly a year now, he’s willing tasted every hot sauce, pepper oil, and barbecue sauce he’s been able to get his hands on in order to share his findings with his growing audience of chili heads. Today, he’s stopped by to tell us a little more about his journey to the fire-y side of canning and preserving and share a recipe. 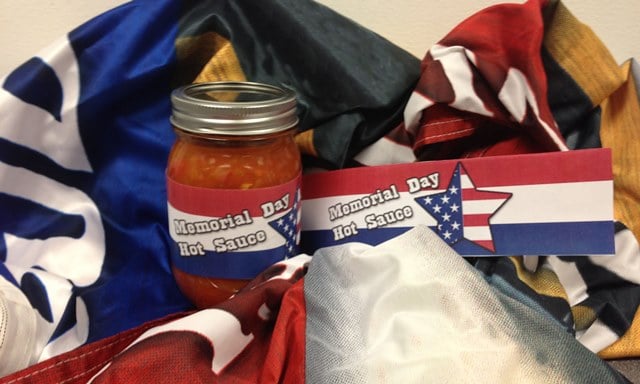 I first realized that I had a hot sauce addiction when it became apparent that my life (and my meals) had been consumed with the thought, “I can add hot sauce to this?” From chicken, burgers and pork, to pasta, French fries and soup, nothing was safe. Between the taste-testing and the brewing up my own concoction, the Lindenhurst house has not been the same since.

I started Sauce Authority in the Fall of 2012 to give my hot sauce obsession a home. I live, breathe and sleep hot sauce – much to my wife’s frequent dismay. I grab every chance to try new hot sauces. And while I can’t get enough of taste-testing and reviewing sauces, more recently I have dabbled in making my own sauce. The most recent batch will have its debut at a party over the Memorial Day weekend.

One thing that I’m doing that made my sauce appropriate for a guest post on Food in Jars is that I’m putting the sauce in a jar, rather than the standard bottles that most hot sauces typically come in. The jar makes it look more of a salsa-type sauce, but make no mistake. It is a seriously hot sauce through and through.

Here is a step-by-step look at how I prepared this hot sauce for Memorial Day weekend: 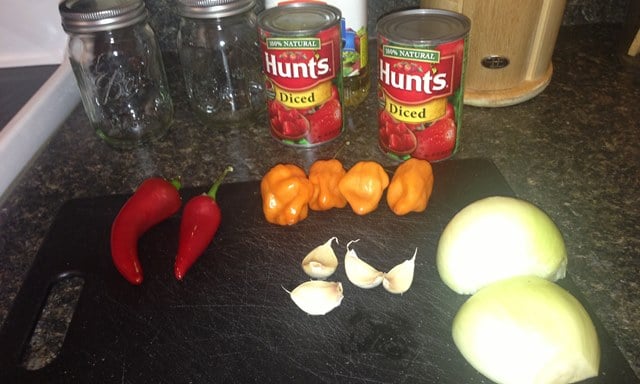 I first started by laying out all of the ingredients. As you can see, there are the empty jars, Hunt’s diced tomatoes, red chile peppers, habanero peppers, minced garlic, vegetable oil and onions. Additional ingredients that were not in this picture include chili powder, salt, and white distilled vinegar. 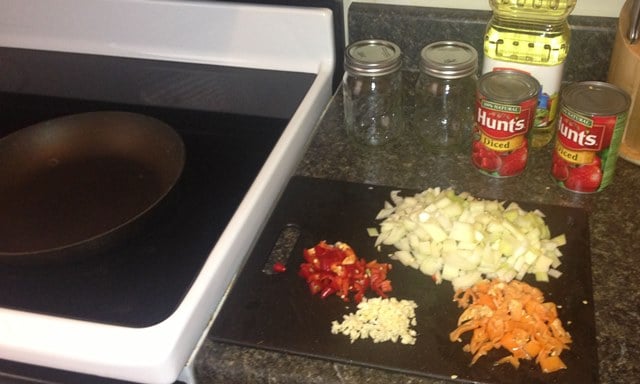 All the different peppers, garlic and onions are sliced and diced and ready for the frying pan. 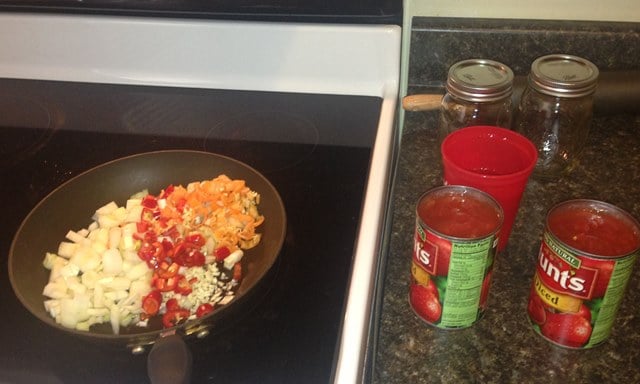 I poured the vegetable oil into the frying pan and then added to the peppers, garlic and onions. Cook them over medium-high heat until the onions begin to brown. 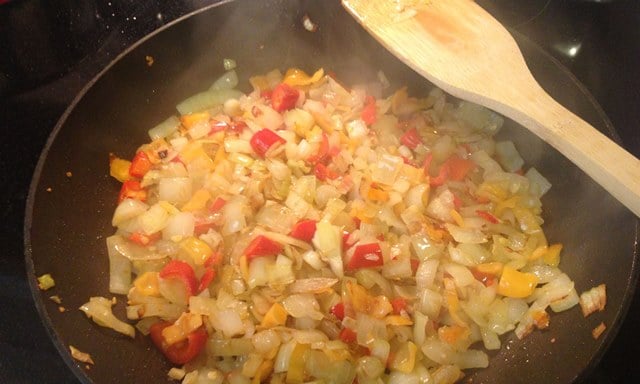 Don’t overdo it though, you don’t want to burn the tips of the peppers. 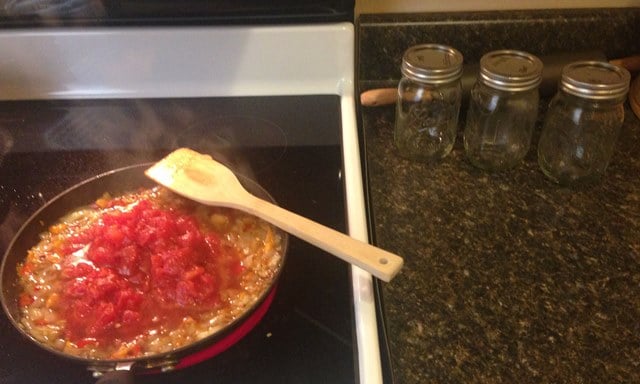 Once the onions have started to brown, you add the diced tomatoes, vinegar, chili powder, and salt. 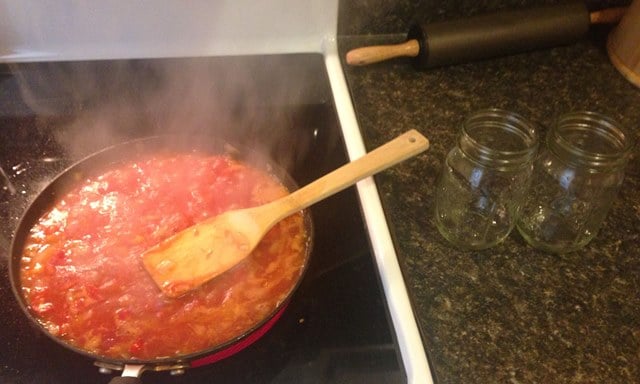 Once the diced tomatoes begin to soften and the vinegar has reduced a bit, you remove the pan from the heat. 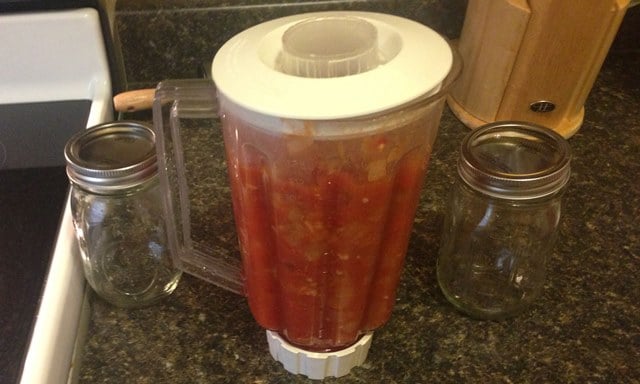 Once the vegetables have had a chance to cool down a little, they get poured into a blender or food processor. Puree the sauce until it’s as smooth as you can get it. 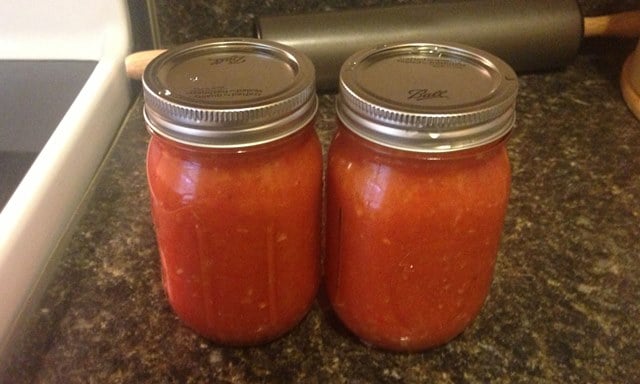 Once the sauce is quite smooth, I strained it through a sieve to remove any chunky bits that remained and then funneled it into the waiting pint jars. 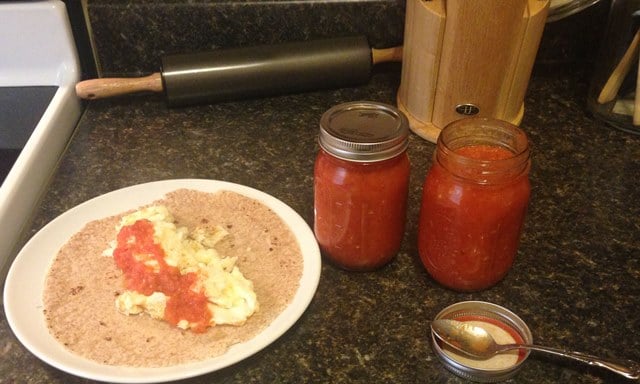 After all that work, I had to take it for an immediate test run. Even though the flavors hadn’t had time to rest and marry, it was still amazingly flavorful and spicy. By the time Memorial Day arrives, the sauce will be ready! 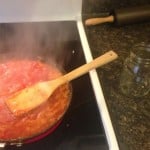