Last year, I went to a bunch of food writer/blogger conferences in order to see beloved people, make some new friends, and help promote my book. In contrast, 2013 has shaped up to be a quieter year (which is fine by me). I’m skipping the bulk of the gatherings in order to spend a little more time at home and save my pennies for next summer’s book push. In fact, the only conference I’m participating in is Eat, Write, Retreat, which is landing in Philly in just a couple of weekends. 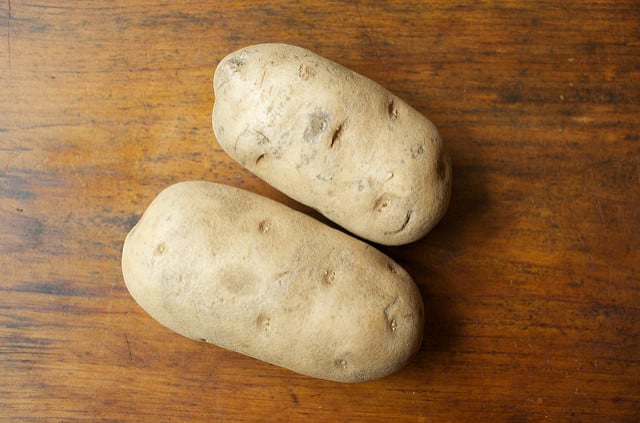 Part of the fun of Eat, Write, Retreat is that organizers start building the conference community well before everyone arrives at the DoubleTree. One of the ways that they’ve done this is by inviting everyone who registered before April 15 to participate in the Amazing Apps Culinary Challenge. Now, I’m not typically someone who gets excited about challenges and contests, but this one is a little different. 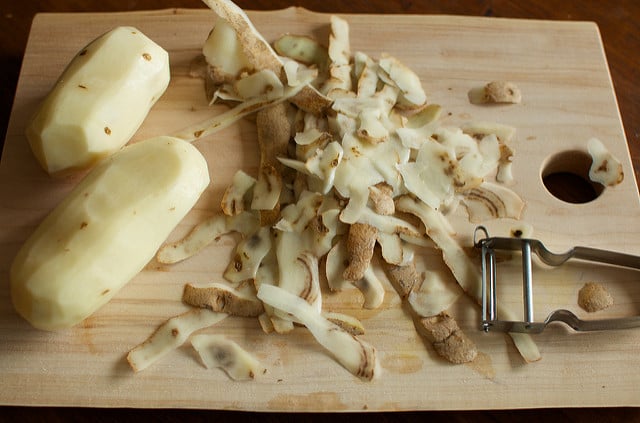 While there are prizes to be awarded at the conference, I actually felt like I won the moment the box arrived, thanks to all the OXO goodies (as well as a gorgeous assortment of potatoes) that it contained. Potatoes, graters, and ricers, oh my! What’s more, I’ve been needing something to shift me out of the cooking rut I’ve been in recently. Inventing an appetizing little dish featuring potatoes and using some of those new tools was just the boost I needed. 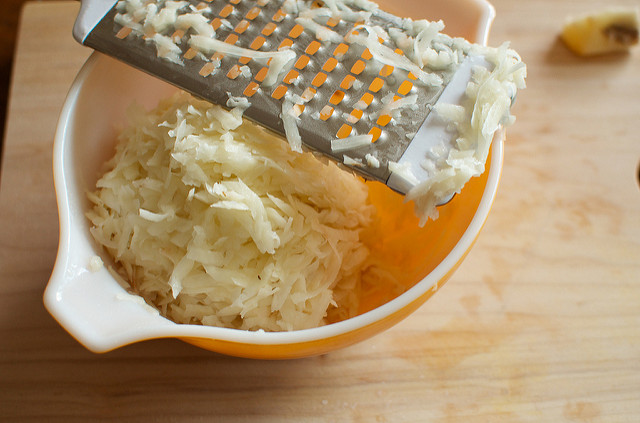 I grabbed the two large, russet potatoes from the basket (approximately 1 3/4 pounds) and got to work. I peeled then and shredded them on the coarse OXO grater that was in the box.

Any time I’m shredding just a pound or two of potatoes, I opt for a hand or box grater. It’s so much easier to clean than my food processor. Then, I bundled up the shreds in a tea towel and squeezed as much water out of them as possible. If you’ve ever made a latke, you know the drill. 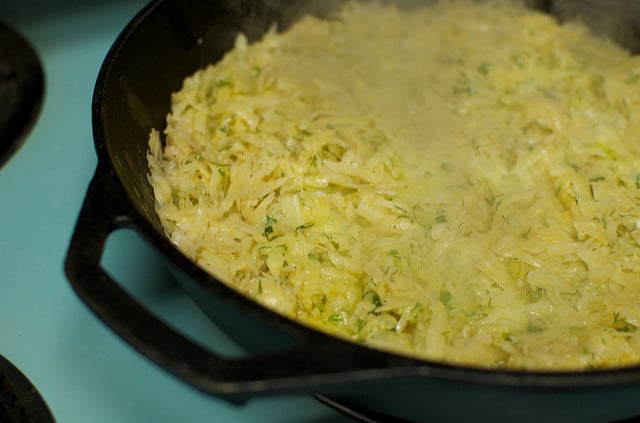 Then I whisked together two eggs, 1/4 cup grated Parmesan cheese, two tablespoons minced green onions, one tablespoon chopped dill, and several turns of a pepper grinder. While whisking, I also heated three tablespoons of olive oil in a 12-inch cast iron skillet and heated my oven to 425 degrees F.

I added the potatoes to the batter and stirred until they were well combined. Then I spread the potato batter out in the hot skillet. It was quite thick, so I used my spatula to tease it out into an even layer. Do take care not to make a perfectly smooth surface, as it will brown better with a few crags and nooks.

Once in the skillet, I cooked it over high heat on the stove top for about five minutes, until a peek at the bottom of the pancake told me it was just starting to brown. Then slide the skillet into the oven.

The trick with a giant potato pancake like this one is that you want to bake it first, until the interior is cooked, and then you turn on the broiler to get a really nice, crunchy top. Mine took approximately ten minutes of baking and another four of broiling before I was satisfied with the color and texture. 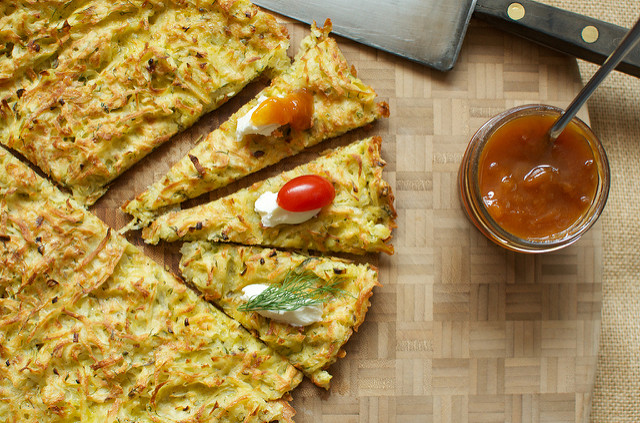 Now comes the appetizer part. This potato pancake can actually go a couple of different ways in that department. For a cocktail party, you could slice it into slivers and top it with a number of delicious tidbits. The potato pancake is just as good at room temperature as it is hot, so works quite nicely on a table of finger foods.

In the picture, I’ve dolloped each wedge with a little bit of mascarpone cheese and then added something tasty on top (from top to bottom, you have last summer’s apricot jam, a grape tomato half, and a sprig of dill). Little strips of smoked salmon or trout would also be fantastic. 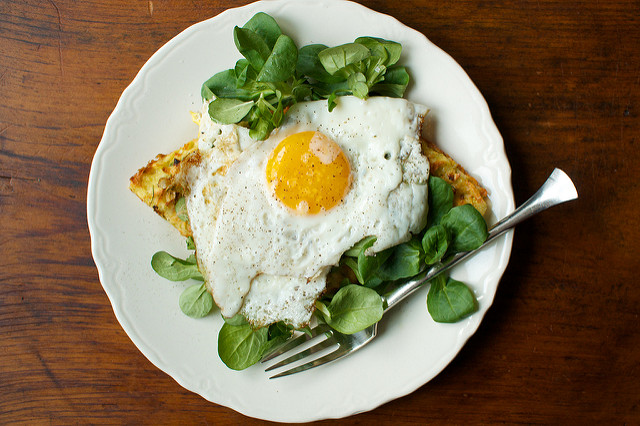 For a more perfectly plated appetizer, here’s another serving option. Cut the potato pancake into quarters. Top with some baby greens (I used mache) and a perfectly fried egg. The texture of the crunchy potato layer with the delicate leaves and runny egg is seriously great (I ate that plate right up as soon as I was finished with the photos).

It’s a good starter for fancy brunches or a farm to table-style dinner. It’s high in Vitamin C. And it’s also great for those folks who can’t manage a pasta course, due to wheat or gluten allergies. For those who have a jar in their pantry, a dab of tomato jam would not go amiss here.

How would you turn a giant potato pancake into an appetizer? 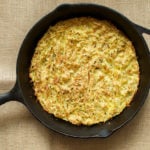 18 thoughts on "A Giant Potato Pancake"