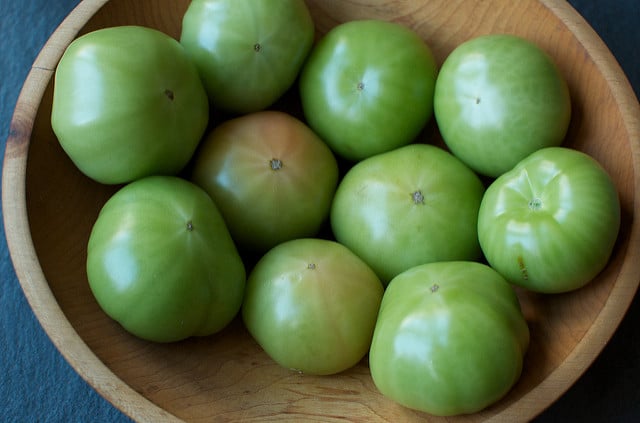 Since January, Olivia has been helping make Food in Jars even better. Her family has a tradition of pickling green tomatoes and so we scared up some out-of-season tomatoes (thanks Fair Food Farmstand!) and made a batch. If you can’t get your hands on green tomatoes right now, remember this one for late summer. Eaten on a slice of Italian bread, these pickles are downright blissful. – Marisa

I know very little about canning. I do have copious jar love—mason jars are scattered about my room to hold sea glass, flowers, and pencils, or simply to be put to use as glasses to drink out of — but I don’t often use jars for their intended purpose.

When I first started interning for Marisa, I was overcome by the sheer amount of jars in her apartment, all the lovely shapes and sizes and fillings, and I began to long to can something. I quickly became nostalgic for the one food I’ve ever canned: green tomatoes. 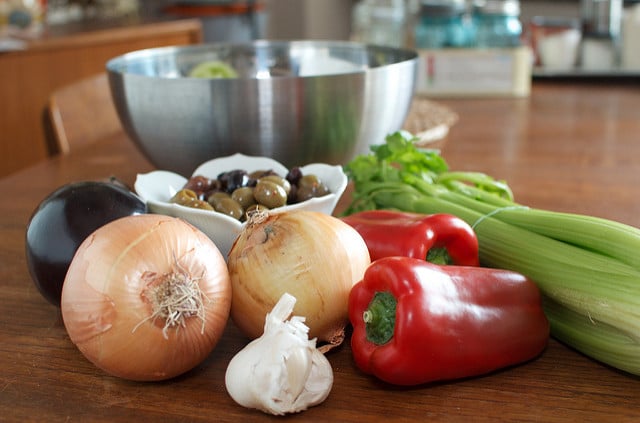 I’ve grown up around good food all my life. Once I made it to college, I realized that I had been spoiled with homemade corn chowder and minestrones, panko-breaded chicken cutlets and oven-roasted vegetables, stuffed breads and antipastos, and, of course, the classic sauce and meatballs nearly every Sunday night.

My mom even makes her own croutons and ice cream cake when she is “feeling ambitious.” In fact, many of my friends have said that they’ve never had a bad meal at my house. Overall, my mother raised me with a slightly picky, but well-versed palate. I’ve been vegan for just over a year now, a decision I came to by observing my brother and roommate—both vegans—and doing a little research on the health benefits. 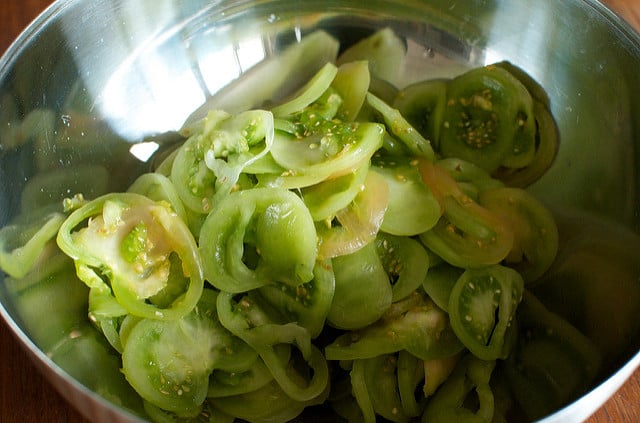 Despite the limits most people think a vegan diet imposes, I feel my tastes and love of food has only grown since I’ve begun to explore new dishes and revitalize old favorites: I’ve learned to work with tempeh to create burgers, mock tuna salad, and some great stir-frys; I’ve made vegan versions of my mom’s corn chowder, panko chick’n, and baked mac and cheese; I also make a mean vegan pizza, complete with cheeseless pesto, artichoke hearts, olives, peppers, and sliced tomatoes.

Many of these things I wouldn’t have tried two years ago, but being vegan has taught me to say “yes” to new experiences and view eating as an adventure, and a rewarding one at that. 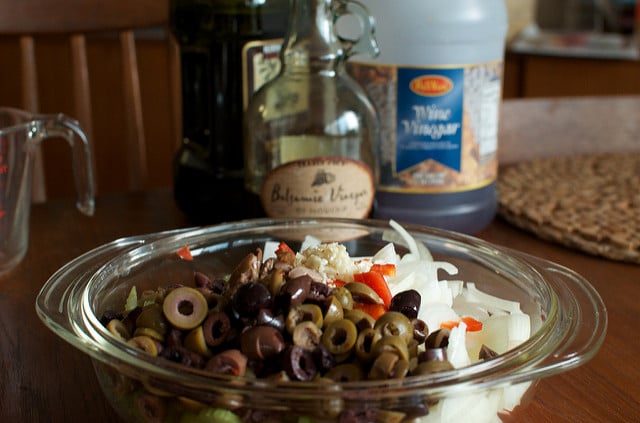 Green tomatoes are a tradition in my family. It all begins with my Noni, my grandmother on my father’s side who emigrated from Pescara, Italy to the U.S. (living in various parts of Connecticut during her lifetime) when my father was just five years old. I fondly remember her watching cheesy game shows, especially with the “handsome Bobby Bark,” playing bingo and blackjack for spare change, and working in the kitchen–as long as she could do so sitting down.

Though her tomato-preserving sessions were before my time, I can clearly recall the days of working in the kitchen with Noni, rolling three baking sheets of meatballs and listening to her sing sweetly in both Italian and broken English. She passed away when I was in fifth grade, so I missed her cooking prime, but my family is well-versed with “Noni Stories,” which has made her somewhat of a celebrity among our friends. 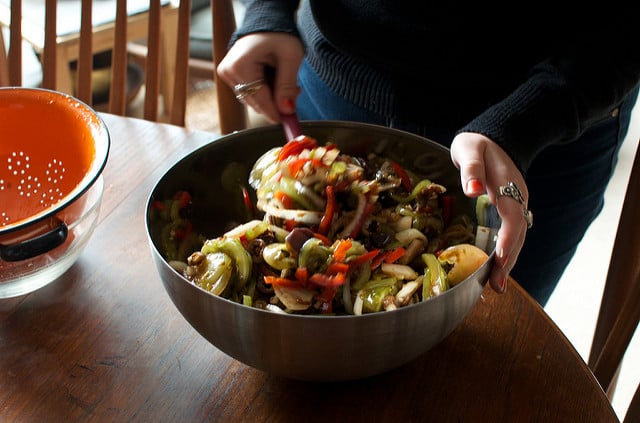 Food was a way for her to remain close to her culture. She helped run a restaurant when she first came to the States and all her meals, both at work and at home with her five children, employed methods she learned growing up on a farm and incorporated characteristically Italian and Mediterranean flavors. The only exception was when she would indulge in spicy, un-authentic, Chinese delivery food in her later years. 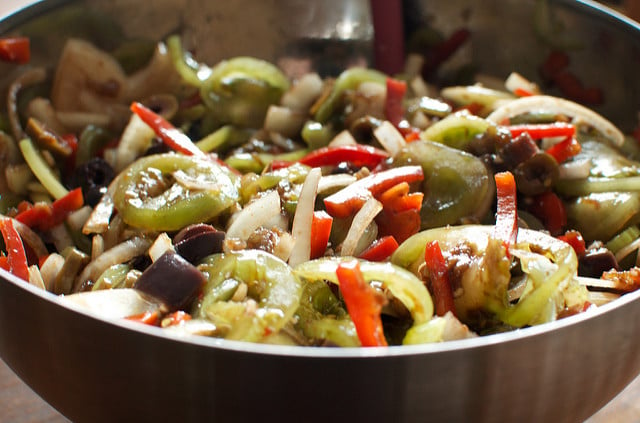 Every September, Noni, with help from my aunts and my mother, would gather up all the green tomatoes from the summer garden and can a dozen jars of pickles. They did this after putting up more than three hundred jars of ripe tomato sauce, just enough to get the family through the year. Noni would get the grandkids to help, too, each putting a sprig of basil in the jars and lining them up on the table. 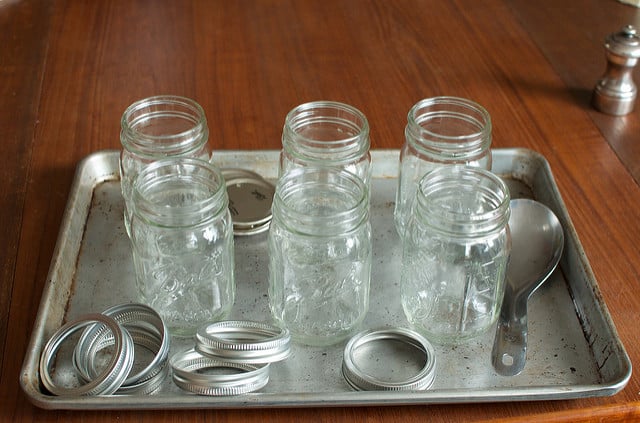 The canning crew would start out by slicing the tomatoes and letting them sit in a bowl, covered in salt, for a few days. When it was time to rinse the tomatoes just before canning them, Noni used to put them in a clean pillow case and into the washing machine on a rinse and spin cycle.

My parents say she would lean on the washing machine when it spun them out to stop it from hopping across the floor. This process is NOT recommended, obviously; she broke a few machines doing this, much to the chagrin of my Nono, who would angrily have to make his way to “Sees-a-Robuk,” or Sears and Roebuck, to buy a new washer. 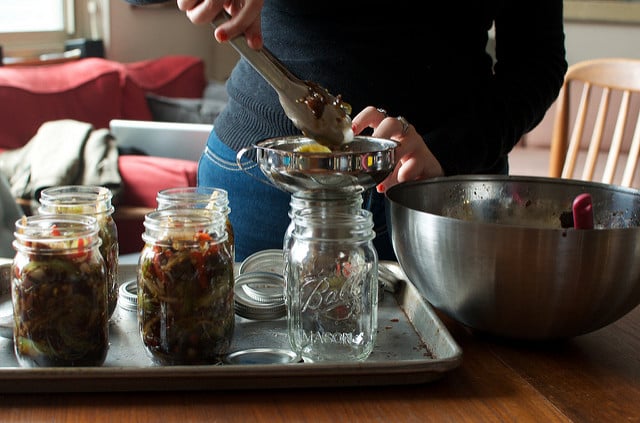 I was not brave enough to try the green tomatoes until my teens, years after my Noni had passed away. I was never really big on tomatoes in any style or form, but once I tried them, I was sold. My taste buds were electrocuted and enlightened by the cold, pickley flavor and the crisp crunch of the tomato.

When I was in high school, I began jarring these tomatoes to use in holiday gift baskets, usually paired with a good wine (which my mother picked out) and a ciabatta or baguette (because in my opinion, great bread makes a meal). The pickles were a hit midwinter, but also took the spotlight at summer picnics, the quickly-emptied ball jar glistening in the sun. 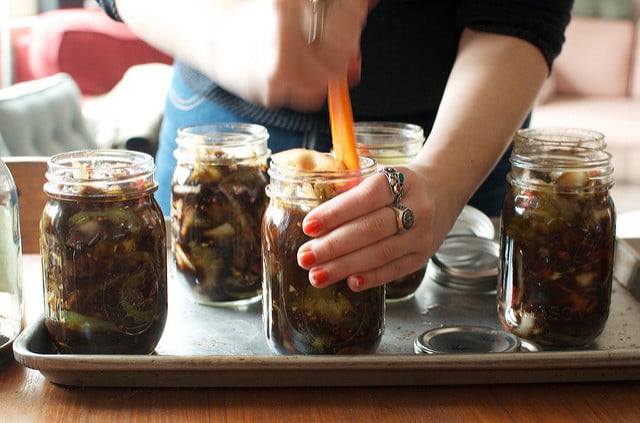 My mom and I have since updated the recipe, adding olives and eggplant to the original, which strictly called for tomatoes, garlic, onion, celery, and occasionally red bell pepper (my aunt sometimes uses green peppers, but red peppers add a nice spark of color to the jar). We were forced to adapt regardless, as my Noni never properly measured anything out — using a coffee cup, a spoon, or the ever-cumbersome “pinch” to explain her recipes to her grandkids, who tried desperately to figure out the conventional measurements.

Though we’ve cheated in making these tomatoes in the past, using already canned tomatoes to concoct our recipe, I’ve been itching to try canning these fresh, as well as perfect my technique so that the oil doesn’t seep out of the lids and ruin my gift baskets. To preserve the taste and texture of this pickle, and because balsamic vinegar is less acidic than others, it is best to store these in refrigerator. 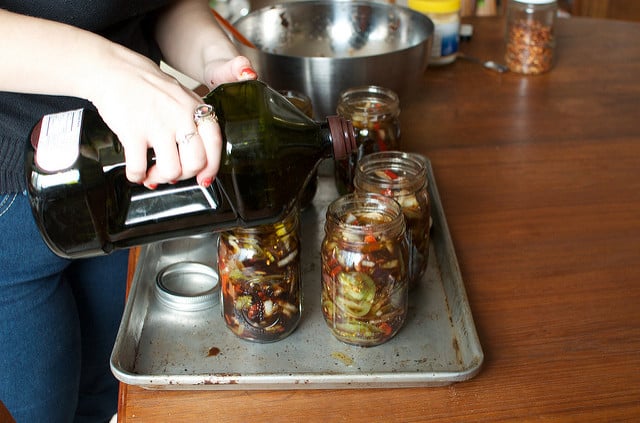 I’m thrilled to share a bit of my family with all of you and to get to join the can-fam as well. Recipe and instructions after the jump, enjoy! 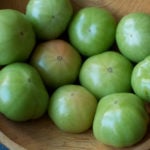