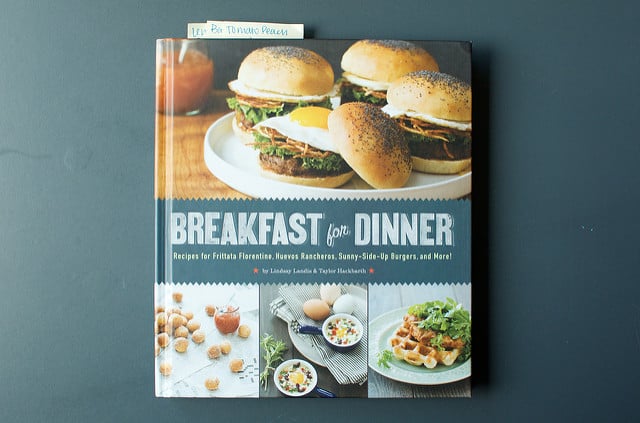 I have had a copy of Breakfast for Dinner

by Lindsay Landis and Taylor Hackbarth on my stack of cookbooks for eight weeks now (I know exactly how long its been because I posted a photo of the book to Instagram the day it arrived). I’ve long been a fan of eating delicious breakfast foods for my evening meal, so I couldn’t wait to take this one for a spin. I flipped through soon after it arrived and tucked a handful of sticky notes onto its pages, marking things I hoped to make. 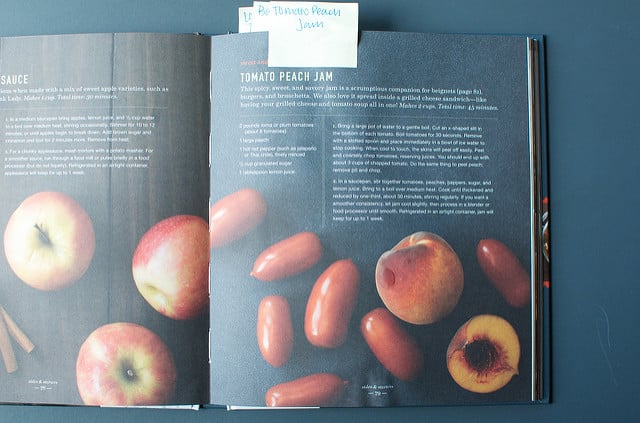 For the last two months, I can’t tell you how many times I’ve plucked it off the pile with the intention of making something before being sidetracked by some other task (being in the midst of a giant writing project will do that). However, earlier today the stars aligned for me to try one of the jam recipes in the book. I had ripe tomatoes leftover from recipe testing and enough time to try a batch of the tomato peach jam. I didn’t have any peaches, but I did have a couple of ripe mangos that I thought would sub in nicely. 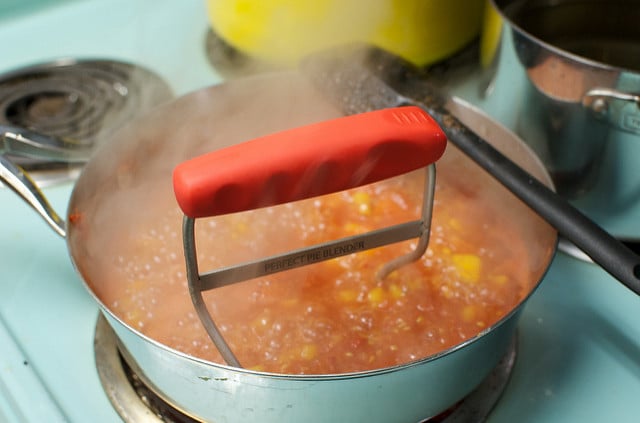 I peeled 2 pounds of tomatoes using the score and blanch method and dropped them into the high-sided skillet that is one of my favorite small batch pans. I added 1 cup of chopped ripe mango (it was 1 1/2 champagne mangos), one well-chopped small, spicy red chili pepper and broke everything up with a pastry blender (a potato masher does the same job nicely). 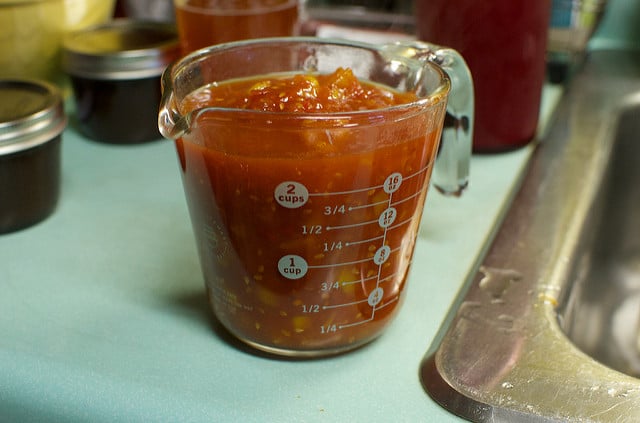 I added 3/4 cup sugar (it’s a bit more than the original recipe called for, but after a taste, I determined that it needed a bit more sweetness), 3 tablespoons lemon juice, 2 tablespoons apple cider vinegar (not included in the recipe, but I wanted it to have a bit more pucker), 1/2 teaspoon salt, and 1/2 teaspoon Aleppo pepper (those last two are also my additions). And then I cooked, stirring regularly, for about 25 minutes, until it was quite thick and spreadable. The end product is sweet, tangy and slightly spicy. I am really pleased with it! 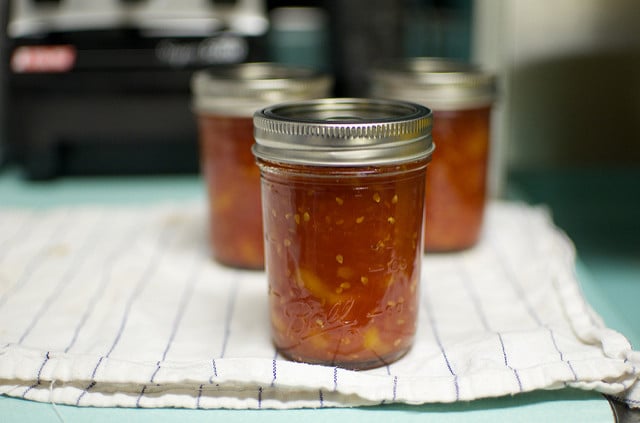 Once the jam was done, I funneled it into jars and processed them for 10 minutes in a boiling water bath. I managed to fill three half pints, though they had slightly more generous than desired headspace. If I had to do it again, I would have swapped out one of the half pint jars for a quarter pint. Hindsight.

As I’ve written this blog post, I’ve realized that I took a number of liberties with the recipe. However, the inspiration and recipe framework really do belong to Lindsay and Taylor. I never would have thought to combine tomatoes and mangos had it not been for their pairing of tomatoes and peaches. What’s more, I betcha that if it was late summer and I had sun-ripened tomatoes and peaches to work with, I wouldn’t have needed to tweak things so much to boost the flavor. I’m looking to trying this one (exactly as written!) again in August.

Thanks to the nice folks at Quirk Books, I have a copy of this book to give away. I’m doing this one as a flash giveaway over the weekend, so we’ll have a winner for this one on Sunday evening. Here are the details:

Disclosure: Quirk Books provided two copies of Breakfast for Dinner at no cost for me. My opinions remain my own.