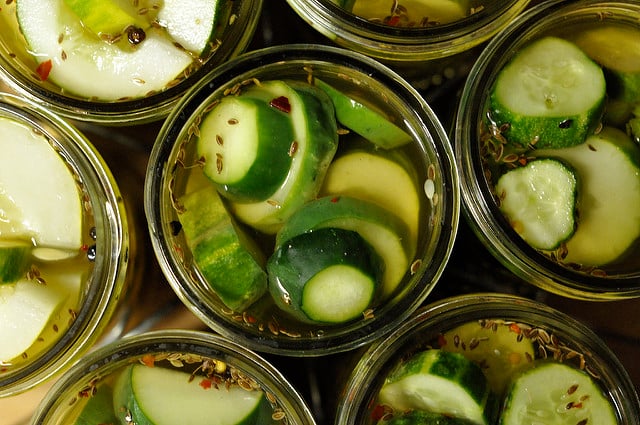 I grew up in a household that appreciated a good garlic dill. As a kid, one of my very favorite after school snacks was a chunky pickle. I would fish one out of the jar with a fork, stabbing until I could get get traction and then drop it into a plastic cereal bowl. I’d slowly nibble away at the pickle over my book of the moment, until all I had left was the stem end of the cucumber and wrinkly, vinegar-scented fingers.

We also believe that no good sandwich is complete without a pickle. My parents take sandwich construction very seriously, and often buy jars of pickles that have been pre-sliced lengthwise just for this purpose (prior to being stacked between the lettuce and the cheese, these pickles are blotted on papertowels, so that the sandwiches aren’t made soggy by too much additional liquid). 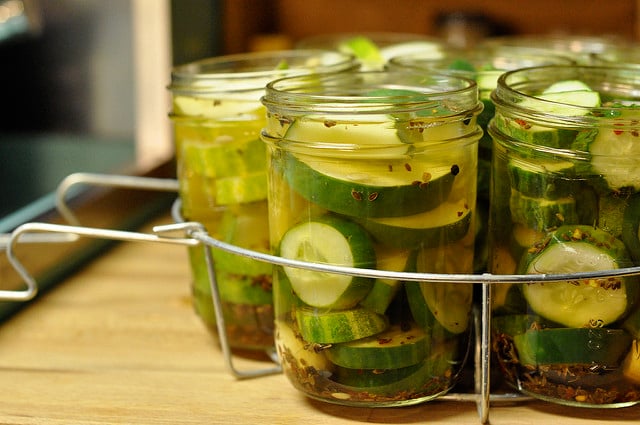 However, up until recently, the idea that a homemade pickle was actually the best kind of pickle didn’t occur to any of us (even taking into account the fact that my father has spent the last 30 years hunting for a pickle to replicate his beloved Polski Wyrob that he hasn’t been able to find since they left Chicago in 1978). I began my pickle enlightenment sometime back in the early spring, when I first started combining asparagus with a vinegar-based brine. I’ve been spreading the pickle gospel out west to my parents in Oregon for sometime now, and it appears that the indoctrination is complete.

My mother and I just spent the last hour on the phone and more than half our conversation revolved around homemade pickles (she now keeps a jar of brine in the fridge, and consistently replenishes the cucumber supply). I can’t tell you how proud I was tonight when she said, “I don’t think I’ll ever buy another jar of pickles again, when making them at home is so easy and so much better.” She’s also got her sights set on making these zucchini pickles (I admit, I sent her the link with a note suggesting they’d be a good way to use up the stampede of garden squash that is coming her way).

And, while I don’t think that my dad will ever find a pickle to compare to the Polski Wyrobs of yore, these garlic dills may just give his taste memory something to get excited about. 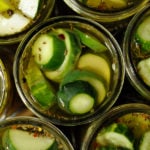 *I use slices because I find that they are easiest to pack into jars. However, you could also choose to make spears, halves or pickle the cucumbers whole. **I like to peel the garlic by leaning on it ever so slightly with the side of a chef’s knife. This bruises the garlic a bit and gets its pungent flavor into the brine/cucumbers more effectively. ***Some people have reported that this level of spice leaves their pickles far too spicy. If your red chili flakes are particularly fresh or potent and you’re not a huge fan of spice, consider reducing the amount.