It’s been a quiet week in my kitchen. Between a marathon day of cooking last Sunday, the hit on the head I took Monday and a Wednesday night dinner of sushi with two of my favorite girls, I just haven’t been making even the very basics. In fact, Tuesday was the only night I made dinner at home and, in keeping with the harried nature of the week, it was a meal straight out of my childhood. Baked chicken, steamed broccoli and a small salad of marinated cucumber and red onion.

When I was growing up, my mom cooked dinner nearly every night. She served up an easy to prepare and family-pleasing rotation of hamburger scrambles, baked chicken legs and broiled salmon, accompanied by at least one green vegetable and the occasional starch (brown rice was often a supporting player). We ate a lot of steamed broccoli (dipped in a little pool of mayonnaise), string beans (with a pat of butter and a sprinkle of garlic powder) and cauliflower (mashed with a few spoonfuls of cream cheese).

One side salad we had often was a quick little thing, made from sliced cucumber and dressed with red wine vinegar, olive oil, dried dill, a pinch of sugar, garlic powder, salt and pepper. She’d make it (always in the same, square stainless steel bowl) at least half an hour before dinner was on the table, to give the cucumbers a chance to soften and mellow in the vinaigrette. As the years progressed, this was the first of her recipes that I co-opted and turned into something of my own, adding slivered red onion and, during the season, hunks of ripe tomato (shaved radish is also wonderful in here).

Despite the changes I’ve made, this salad never fails to give me a satisfying sense of culinary continuity. A favorite thrift store even offered up a mate to my mother’s shallow square bowl, allowing me to match my presentation to that of memory.

The reason I include this recipe here is that is can be classified as a quick pickle and would be quite at home tucked away in a jar (leftovers are delightful). It’s best made with English cucumbers, but does work nicely with your basic garden cucumber, as long as you peel and seed it. 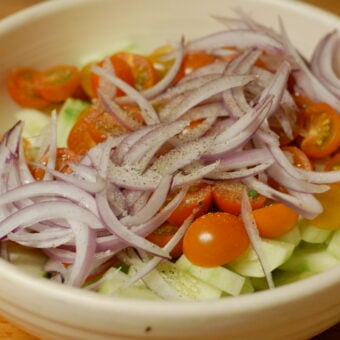