A couple of weeks ago, I got the most inspired idea from a reader. Knowing that Passover is around the corner, she wondered whether it would be possible to make a jam based on charoses (also spelled charoset), one of the traditional components in the Seder meal. It’s a dish traditionally made from chopped apples, nuts, honey, cinnamon and wine, and it on the table to represent the mortar that Jews used when laying brick, during their days of slavery in Egypt.

Though my mother is Jewish, we didn’t observe many of the holidays when I was growing up. In fact, the bulk of my experience with the ceremony of the Seder came from gatherings in our Unitarian Universalist church parish room and my repeated readings of the All-Of-A-Kind Family

However, since moving to Philadelphia in 2002, I’ve attending at least one family Seder every year, and have come to really appreciate the yearly ritual, and the ways in which it celebrates the struggle for freedom.

As far as food and Jewish holidays go, Passover is somewhere in the middle of the pack in terms of delicious. You’re instructed to surrender leavened items for the eight-day period. But even in with the restrictions, one can find moments of culinary joy. Personally, I find a lightly buttered and salted piece of matzo to be pure bliss. Add a scoop of charoses and a dollop of horseradish (another traditional Seder plate player) and I’m a happy girl.

In thinking this particular batch of jam out, I knew it wouldn’t be an exact replica of what is essentially an uncooked apple-walnut salad. But I did want to create something that would be somehow similar and familiar. Apples were a given, as was honey and cinnamon. I used grape juice in place of the wine and added a bit of lemon juice to balance things out. And I chose to use almonds in place of the more traditional walnuts, thinking that they would retain their crunch better.

Initially, I was uncertain about the addition of the nuts in the jam, as I wasn’t sure how they would effect the pH level of the jam and thus its safety. However, after doing some research, I eventually came across this recipe for Apricot-Orange Conserve that used similar proportions to what I was planning. If the National Center for Home Food Preservation could comfortably include some nuts in a batch of jam, I knew I could too.

I am really pleased with my initial attempt at this recipe. It’s thick, spreadable and not too sweet. Some might call it more of a chutney than a jam, because of the texture that the chopped nuts lend. However, since it doesn’t include a savory component, I’m going to keep calling it a jam (unless someone has a better name for it). Making this had also had me thinking about other ways that Seder elements could be transformed into preserves (Apple Horseradish Jelly, perhaps?).

I’m thinking that this jam might make for a nice gift if you’re having friends over for a Passover Seder and want to send them home with something delicious and thematic. Passover starts on Monday, March 29th this year, so you’ve got just under a week to whip up a batch! 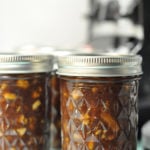