Carrot Soup for a February Night 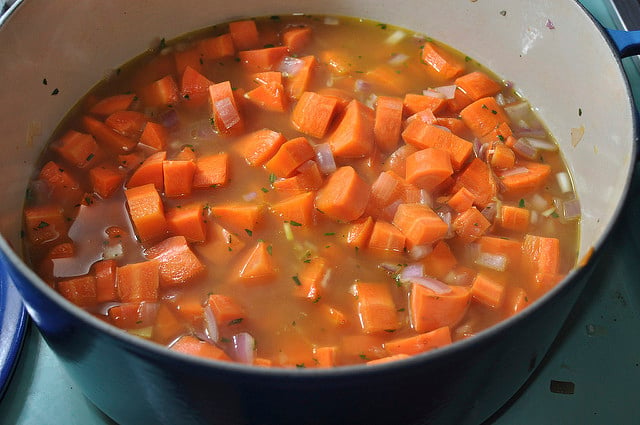 I have not been doing a good job managing the contents of my refrigerator lately. Last week was Scott’s birthday, which meant that we both ate at home more lavishly than normal and also dined out several times. This break from the ordinary routine threw off the balance of edibles and resulted in aging leftovers and slimy produce.

This afternoon, I spent a little time throwing away anything that was too far gone to be salvaged and making a plan for whatever remained. After taking stock, there were six giant carrots, several onion halves and a baggie of rosemary. Soup seemed the obvious choice.

I chopped the carrots, onions and a sprig of rosemary and cooked them in a bit of butter until the onions started to brown. Then it was just a matter of covering the veg with stock (one quart ham and a pint of chicken, each made nearly a year ago and pressure canned) and simmering until tender.

After that, I used my immersion blender to smooth out the soup with a couple glugs of half and half. During the blending process, I scraped in a little fresh nutmeg and added several generous pinches of salt.

We ate it topped with some little cubes of ham that I found in the freezer and browned, and a few odd slices of toast.

One of the things I love about pureed soups is that they’re incredibly forgiving. They don’t demand perfection and are entirely willing to flex in order to absorb whatever needs to be used at the moment. In a lifetime where I constantly feel like I’m running to catch up, I appreciate a meal that adapts.

14 thoughts on "Carrot Soup for a February Night"