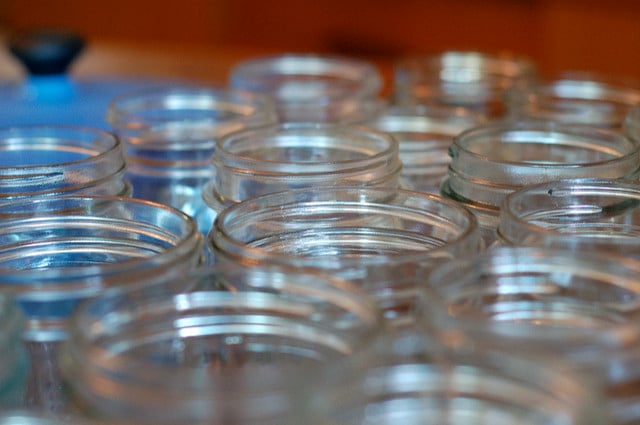 I’m off on vacation this week with my husband Scott. While we wander the wilds of Lancaster County, PA, a few of my favorite bloggers will be dropping by to keep you entertained. Up today is Joel McCharles from the blog Well Preserved. He is an avid canner and preserver (make sure to check out his series on dehydrating) his passion for good food is infectious and inspiring.

When Marisa approached me about writing a spot here, I was filled with excitement. I tried to think what I could bring to this amazing forum that would hopefully be a combination of useful and unique.

Excitement was followed by rapid brainstorming (the synapses in my head make a lot of noise and the info-graphic that would express the noise between my ears would look like a lightning storm which looks really impressive but isn’t awfully useful). A random list of ideas were filtered until I decided I wanted to share something that:

• Talked about jars (kind of a requirement given the space)
• That brought a Canadian bend to the conversation (I still don’t know why this was important to me at the time but it seemed to make sense so I went with it)
• That could be used as a tool or reference for other members of our kitchen army (a revolution largely armed with jars and the bounty of the harvest.

Marisa, a few friends and I had been discussing ratios at the time. I thought that I could bring something of value to the conversation by sharing a bit about how I use the metric system to make ratios easier to measure. I should note that I don’t always use ratios and when I do, they are generally based on weight but there are times that it’s very useful to know how to use volume within simple ratios to save some time or bail you out of a pinch when your batteries die on the beloved scale. Volume-based ratios are effective when mixing liquids with liquids, solids with solids or a small amount of one with the other (such as in a salt brine). They are less effective when considerable portions of each are mixed together (1 cup of eggs weigh far more than 1 cup of flour).

In a nutshell, I want to make a case for replacing measuring cups with canning jars. I further want to share some simple metric conversions that will make calculating ratios far easier than using Imperial measuring. Jars are ideal measuring vessels – their various sizes allow you to measure large quantities of items (i.e. instead of counting 16 cups with my single measure, I can fill 4 mason jars, save time and counting).

Before we begin, a bit of background on the use of the Metric System in Canada: most Canadians use Metric for measuring speed (all of our cars and highway signs are written in it) while most of the same people buy a lot of our groceries and weigh ourselves using the Imperial System (our friends in the UK are the exact opposite).

Other measurements are less clear. I, like many Canadians, buy meat and protein by the pound but buy cheese in grams and milk in liters. Like a child who picks and chooses the vegetables they like, we pick and choose when we use which measurement. I can tell you exactly what 300 grams of cheese looks like but I can’t tell you what a pound of it would look like. I can also tell you my exact weight in pounds but would need Google to tell me how many kilograms are in it.

When it comes to volume, Metric is wonderfully easy to put together:
• A milliliter (one-fifth of a teaspoon). “Milli” means “a thousand.”
• A liter (approx 4 cups). 1,000 milliliters.

If you were making a salt brine and trying to make it 5% salt, you would need 50 ml of salt to the 1,000 milliliters of water (for the uber-math elite, of which I am not, this is not 100% accurate but is close enough for a brine in my experience).

Other critical measurements would include:
• 1 Tablespoon (15 ml)
• 1 Teaspoon (5ml)

When cooking with ratios, I start with determining what ingredient I need most of and use that as my base. To make this easier to explain, if a recipe calls for 5 parts salt and 3 parts sugar, I use the 5 as my base (I call it ‘base 5’). If it called for 4 parts salt, 3 parts sugar and 1 part pepper, I would use this as base 4. Note that every other number in the ratio after the base will always be smaller.

I should also mention that all Canadians are not nearly as geeky as I am.

Knowing the approximate metric conversions free me up when working with imperial (as much of my cooking is based on it) and allows me greater culinary creativity by understanding how the different sizes relate to each other. Of course having a better understanding of the Imperial system would accomplish the same feat but I thought I’d put this out there as food for thought!