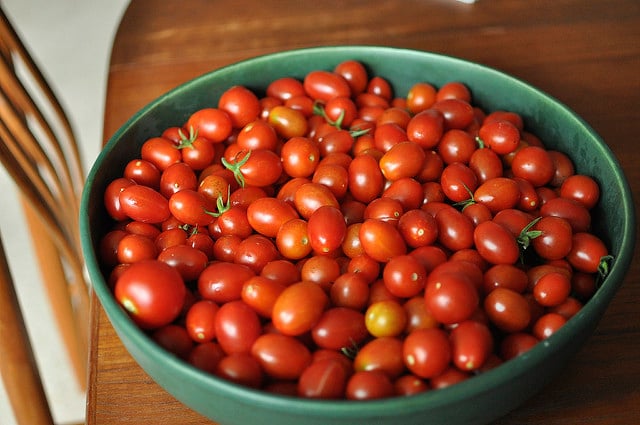 Last week, I monumentally lucked out. Heather and Steven from Little Acre Farmstead swapped me ten pounds of little tomatoes for an assortment of jam. I think it may well have been the best trade of my life. Admittedly, my bartering career is in its infancy. But still, I was tickled. Thing is, ten pounds of tiny tomatoes is a whole lot. So I had to get creative with my preservation techniques. Here’s what I did. 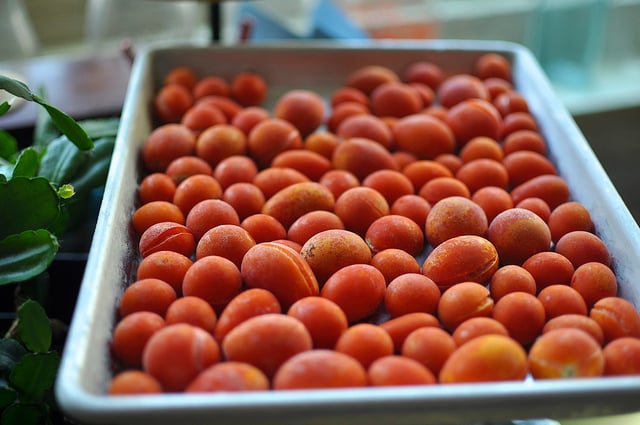 I froze enough to fill two small cookie sheets. This is the easiest method I know. There’s no prep, you just fill the sheet, pop them into the freezer and leave until solid. Once they turn into tomato marbles, funnel them into jars or zip-top bags and return them to the freezer. 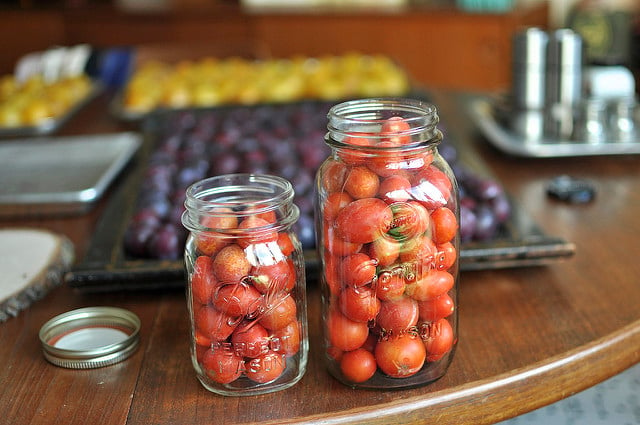 They can be used in soups, stews, roasts and veggie scrambles. Someone also mentioned recently that preserving tomatoes like this makes them great for tomato cobbler ( It was Melissa from Bridgman Pottery! So pretty). 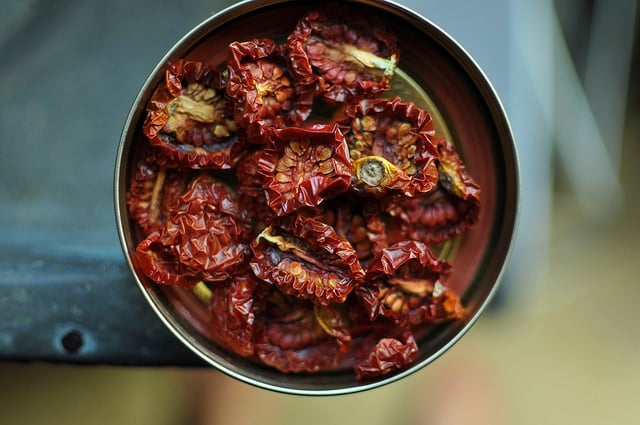 Next up is dehydrated tomatoes. You do need some additional equipment here, but I plunked down the cash for a dehydrator couple of years ago and have yet to regret it (though it is something of a space hog).

In addition to tomatoes, I use mine for peaches, lemons, limes and the occasional batch of jerky. This is the one 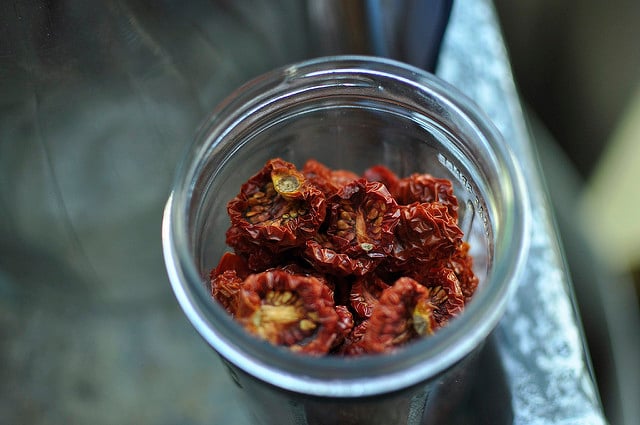 I make these almost entirely so that I can make this zucchini noodle salad that Tea turned me on to a couple of years ago. They are also good for general snacking (like tomato candy!) and adding to things that have a bit of moisture (they do need to rehydrate a little once in food). You could also puree them into a tomato powder, should you ever need such a thing. 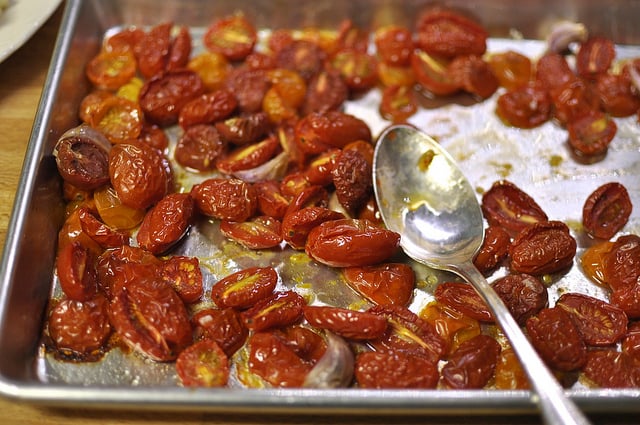 Roasted tomatoes. We’ve already talked about this one recently. Still, they’re worth the reminder. Add a handful of unpeeled garlic cloves and some fresh thyme. Or a few slivers of onions and some rosemary. Oregano is also good. However you make them, you won’t be sad that you did. 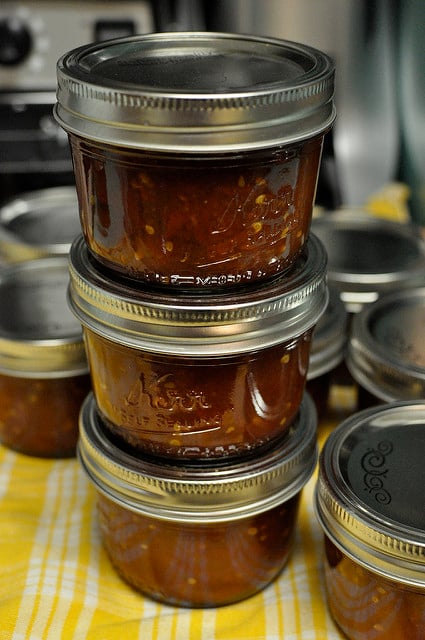 Here’s another option that I’ve mentioned in the past. Tomato jam. I loved how these little grape tomatoes worked in this recipe. The seeds are a bit smaller, which makes for a really nice texture. And they’re already so sweet that if I use them again in this application, I might just reduce the sugar a bit to compensate. Also, it’s worth noting that this time around, my yield was just three pints as opposed to the four and a half I got last year. 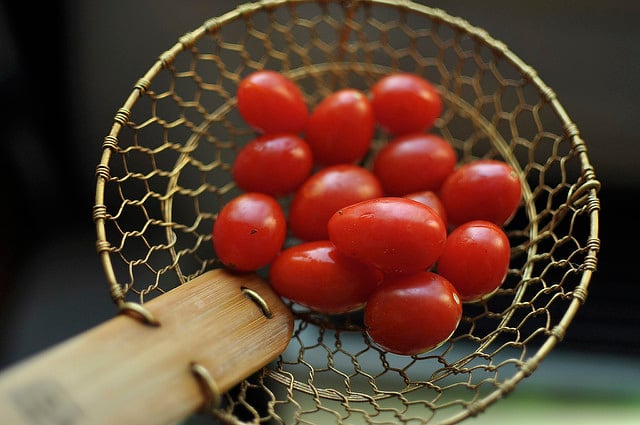 After I froze, dehydrated, roasted and jammed, I had about a pint of tomatoes left. Those became a small batch of refrigerator pickles. I actually took the time to slit, blanch (about 90 second dip in boiling water should do it) and peel all those teeny tomatoes so that they’d better absorb the brine. Luckily, when you’re working with just a single pint, it’s not too tedious. 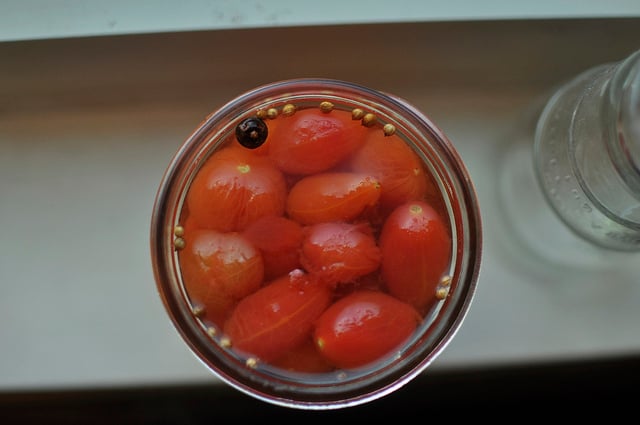 The brine was 1/2 cup apple cider vinegar, 1/2 cup filtered water, 2 teaspoons pickling salt, and 2 teaspoons sugar. I added tiny pinches (no more than an 1/8 of a teaspoon each) of mustard seeds, coriander seeds and red chili flakes to the jar, along with two juniper berries. Pour the brine over the tomatoes. Tap to remove bubbles and add a bit more brine. Keep in the fridge for at least 48 hours before eating.

Unfortunately, these are too fragile for boiling water bath storage. They will dissolve into nothing in the heat of the canning pot.

Now, how do you like to preserve tiny tomatoes?

Posted in whole fruits and vegetables