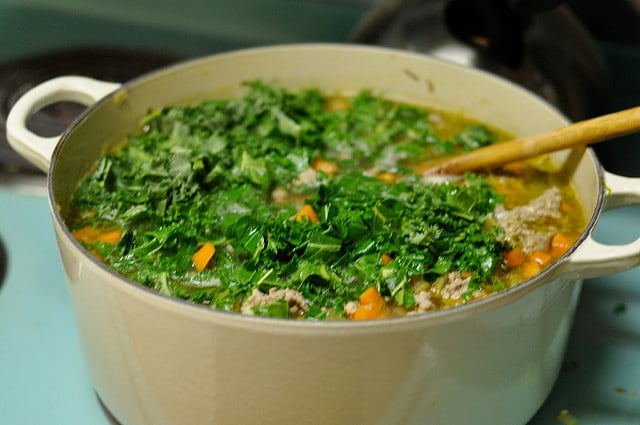 I’m coming to realize that during the winter months, Sunday is nearly synonymous with soup in my brain. Here in Philly, it barely got above 30 degrees today, making soup doubly necessary. Luckily, I had everything I needed in my pantry and freezer to make a big pot of sausage, kale and white bean soup. 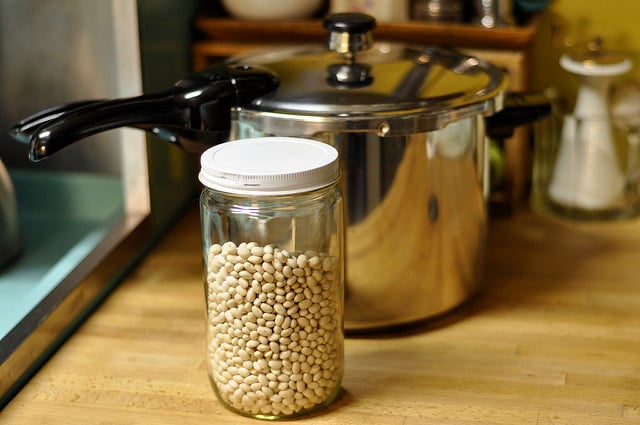 First step was to break out the pressure cooker and cook off two and a half cups of navy beans. I bought these lovely little white beans at the Headhouse Square Farmers Market last fall and have had them tucked into a jar since then. To be perfectly honest though, I don’t know for sure whether they’re locally grown. The woman who operates this particular stall isn’t the most friendly and so I rarely try to engage her in conversation. I realize, though, that it’s poor locavore behavior on my part.

Side note about navy beans. I spent years thinking that since they had the word navy in their name, that meant that they were navy in color (somehow I never connected those small, creamy beans my mom put into soup with the name “navy”). It wasn’t until I was far past voting age that I learned that they were actually essentially white beans and were called that because they were commonly served to sailors. Live and learn.

Anyway, 2 1/2 cups of navy beans, cooked with 6 1/2 cups of water in a pressure cooker for 30 minutes will give you six cups of tender beans, which just happens to be an ideal amount for this soup. 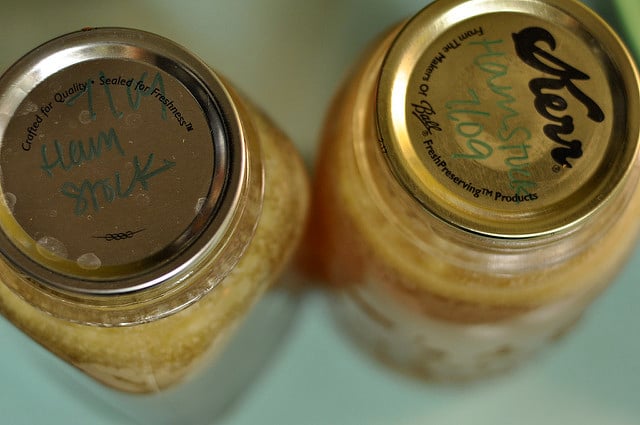 For the liquid component, I used two quarts of the ham stock I pressure canned last July. Lately, I’ve been really working on using the foods I’ve preserved (I get so excited about stocking my pantry that I sometimes forget that preserved food needs to be in near constant rotation) and so having an opportunity to use some of my canned stock was an added boon when making this soup. It’s also great because I know that the ham hocks I used to make that stock were local and humanely raised. 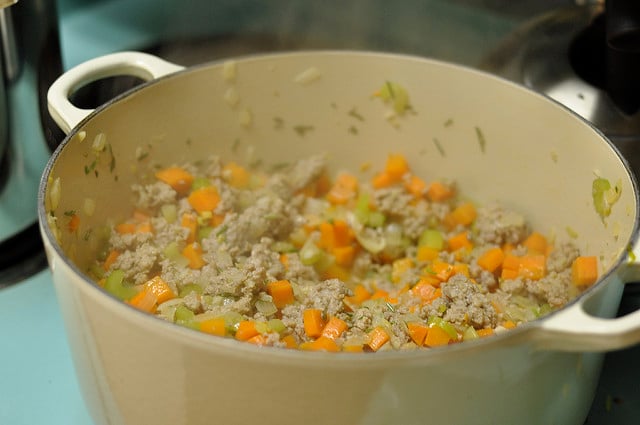 The soup started in the same way that many of my soups start. One minced onion, three fat carrots (diced) and four celery ribs (that darn celery is the only non-local component in this soup. I wasn’t thinking when I added it.) diced and sauteed in some fat/oil. I used some of my local lard (when my porcine-free mother reads this post, I am certain she will cringe at the number of pork products that went into this meal) but you could use also happily use olive oil. As the veggies browned and softened, I crushed and minced four big garlic cloves and the leaves from one sprig of rosemary and added them to the pot.

Once the veggies had some color, I created a well in the center and added two pounds of fennel sausage (set free from its casing) from the Meadow Run Farm buying club. I am addicted to this sausage. It has great flavor, is relatively lean and comes from those same happy, local pigs that provided the hocks that made the ham stock. Two pounds of sausage makes this a very meaty soup. Next time I make it, I will probably cut the meat by half. However, right at the moment, my husband is doing phase one of the South Beach Diet, and so I went a little heavier than normal on the protein for him.

After the meat was cooked and stirred into the veggies, I added the ham stock and beans, but the lid on and allowed the soup a bit of simmer time. 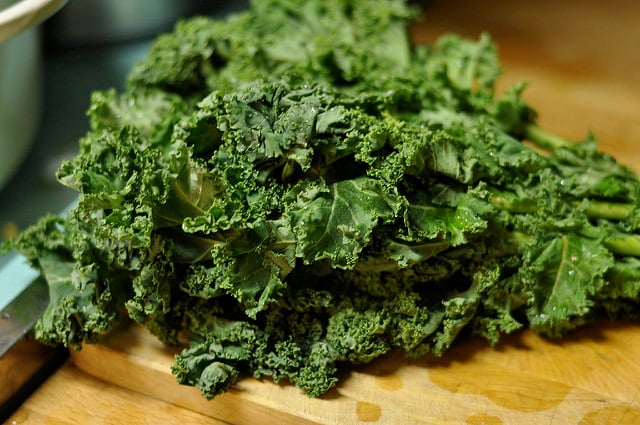 I recently joined Winter Harvest, which is a wintertime buying club here in the Philly-area, run by Farm to City. It is a terrific way to get reasonably priced local produce, meat and dairy when most of the area farmers markets are shuttered for the season. In my first order, I got red and yellow onions, some sweet little beets, vividly orange-yolked eggs, a gallon of raw milk and the bundle of kale you see above.

Kale is one of my favorite vegetables, particularly because it can be prepared raw or cooked. It plays really well in soup and was a shining star in this particular batch. Stripped from the stem, I washed the leaves well (nothing makes a dish sadder than sandy grit from poorly washed greens) and chopped them to bits (first, fine ribbons. Then, rotate the board 90 degrees for bittage). I stirred the chopped greens into the soup during the last fifteen minutes of cooking. 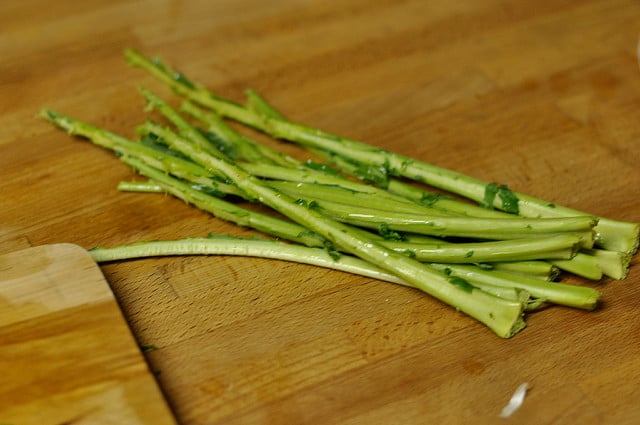 Had I planned better, I would have stripped the stems from the kale sooner, cut them into small bits and sauteed them with the onions, carrots and celery (probably would have been a good substitute for the non-local celery, too). Sadly, I didn’t think that far in advance and so ended up pitching the stems. However, they are quite edible (my mom likes to eat them raw with a bit of hummus).

When the soup was finished, it was deliciously warm, filling and happily, almost entirely local (particularly if you skip over the celery and don’t look too closely at my beans). If you’re not a pork person, you could easily substitute turkey sausage and some homemade chicken stock. It wouldn’t have that smoky flavor that the ham stock lends, but would still be quite delicious (although, now I’m wondering about making stock with smoked turkey wings. Could be delicious and just the thing for the pork avoiders in the crowd).