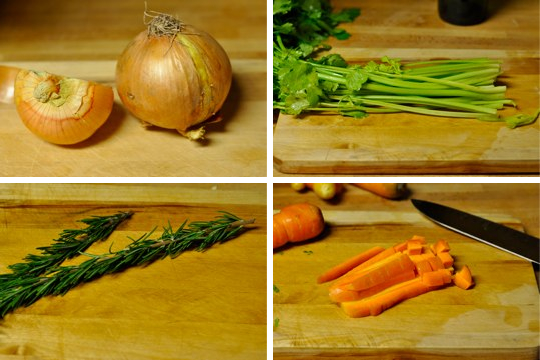 One of the things that tipped me off to the fact that Scott was the right man for me was when I discovered his nearly endless capacity for consuming leftovers (a couple of weeks ago, when I was down with a cold and wasn’t up for cooking, he ate from the pot of chili I’d made over the weekend for five nights in a row). I know many an individual who can’t stomach the same item two nights in a row and so big braises, soups and stews are out in their households, as it’s nearly impossible to make those items on a scale small enough to satisfy the one-night rule.

I grew up eating leftovers and so never knew that there was another option (my mother was a big fan of making one cooking session last for at least two nights). When I moved out on my own, I’d often make a large-ish batch of a grain salad or bean soup, to eat for at least one meal a day, all week long. It made life easier and kept food costs controlled (I found that a pint jar of soup with an apple or a few Ak-mak crackers makes the perfect workday lunch). 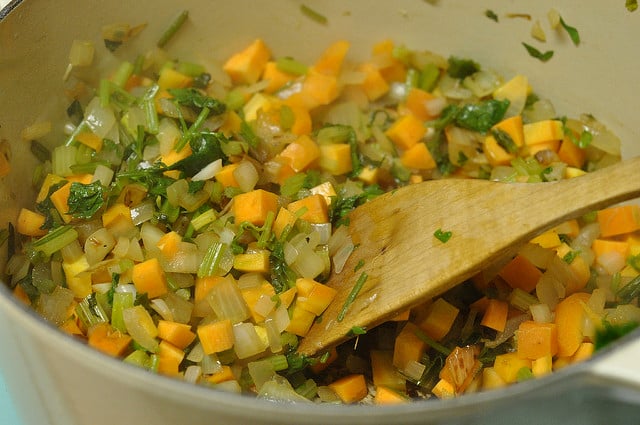 During the cooler months, I have one soup that I make nearly every other week. Around here we call it ground beef soup, although the vegetables are the stars, not the meat. It can be made in huge quantities (tonight, I filled my seven quart pot), keeps well and Scott and I both happily eats it meal after meal after meal. And this time of the year, all the ingredients are available locally.

The vegetables shift a little depending on what’s in the kitchen, but I always include onions (Fair Food), celery (a chinese variety, from the farmers market), carrots (Fair Food), potatoes (from the farmers market several weeks ago) and tomatoes (home canned in September). In addition, tonight I also used two tiny cabbages (shredded) and a black turnip (both of which were part of my final CSA box), a celeriac bulb (Fair Food), some rosemary from a friend’s community garden plot and a few cloves of garlic (from Seattle, purchased as an edible souvenir and hand-carried home when I was there in August). 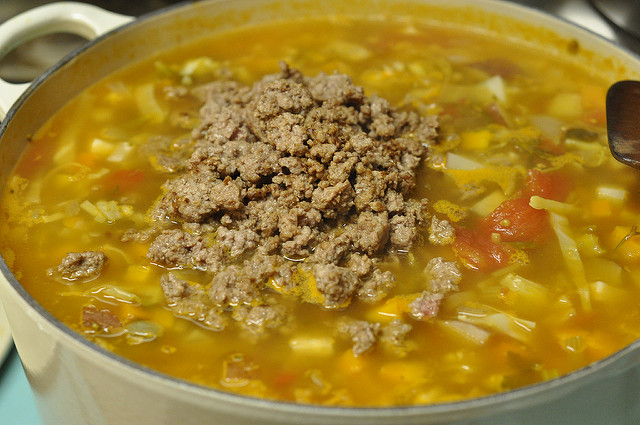 To make this soup, I chop the vegetables (starting with the onions and then moving through the celery, carrots, celeriac, turnip and cabbage) into approximately equal sized cubes, adding them to the pot to saute in a bit of olive oil. Then I add the tomatoes (tonight I used one quart and one pint because I was making such a huge batch), some water (enough to entirely cover the veggies) and the potatoes. Then the rosemary and garlic. Lid on and let it simmer (when I’m not concerned with keeping it entirely local, I will also add some frozen peas at this point. Tonight, in the interest of adhering to the challenge of Dark Days, I skipped them) until the potatoes are tender.

At this point, I have a pot of deeply flavored, totally vegan soup (don’t forget to add salt and pepper to taste prior to serving). In the past, I’ve made this for parties and stopped right here so that all guests can eat. In that case, I’ll create a garnish bar that will include some cheese, browned ground beef or sausage, croutons and toasted nuts (for the vegans who still need protein). However, when I’m making it for the two of us, I brown the ground beef (grass fed from Meadow Run Farms) in a skillet and use a slotted spoon to transfer it from the skillet to the soup pot (to minimize grease transfer). It’s a great way to make a pound of meat stretch to cover nearly a week of meals.

One of the most satisfying things about this soup? Whenever I make it, Scott always turns to me once his bowl is empty, smiles and says, “Mmm! Such delicious soup!”