When I first started becoming truly enthralled with canning, I began to look beyond the standard Mason/Ball/Kerr jars available. I discovered the Weck jars that are typically used in Europe, but was put off a bit by the price tag and the fact that they are often hard to actually get (I did break down and order a half dozen from Lehman’s, but with shipping, they cost somewhere in the neighborhood of $7 a jar. That is far too much for the volume of canning I typically do).

However, when I took a close look at the way in which the Weck jars seal, I realized that they are practically identical to the vintage bailing wire canning jars that were popular in this country through most of the 20th century. The glass lids on the Weck jars seal via a rubber gasket. Through the hot water process, everything is held in place by a couple of metal clips. The glass lids on the vintage jars seal via a rubber gasket.

During canning, the lid is held in place by the metal wire that locks up over the lid. The thing that makes the vintage jars even better than the Weck jars is that you have an easy way to keep the jar closed after you’ve opened it, via the bailing wire. When you use the Weck jars, you have to keep replacing the metal clips (or get a set of their plastic lids).

So once I figured out that the jars I already had (and had gotten for free when helping a friend of a friend clean out her mother’s basement) would do the exact same job as the spendy ones, I got down to work. I ordered a set of rubber gaskets from Lehman’s for just over three bucks (they’re the only ones who still seem to carry them) and made a canning plan.

I did a mixed berry jam, because I’ve been endeavoring to clean out my freezer, in preparation for the coming onslaught of produce and still had some frozen fruit from last summer. I supplemented my frozen strawberries and raspberries with some fresh (but cheap and decidedly not local) strawberries (I made up for it the following week by hand-picking 13 pounds of local strawberries and making the best jam I’ve ever tasted. That recipe is coming later this week).

When canning with these jars, most of the steps are the same as with the screw-top jars. You clean your jars, lids and seals well, prepare your jam and fill the jars. Once the jars are filled, you wipe the tops clean and the apply the rubber seals and top with the glass lids (of course, making sure that your vintage jars and lids are without chips, cracks or other damage).

Like when you can with conventional mason jars, you need to leave some space for the air to escape. To do this, you don’t lock the wire down all the way. You close it so that it’s closed, but pointing up, not down (if this doesn’t make sense, just get an old bailing wire jar and start opening and closing it. You’ll soon notice the two closure positions).

Process jars as usual. When time has elapsed, remove the jars from the water, being careful not to tip them (these jars are mostly glass, which means that if you get the jam on the top of the lid, you’ll see it, and if you’re a bit of a perfectionist, the residue that will stick to the lid will vex you). At this point, grab a tea towel and lock the wires into the tightest position with the wire pointed downwards. This presses the rubber gasket more firmly into contact with the rim of the jar and ensures a good seal.

The next day, when the jars are all cool, unlock the bailing wire. The lid should not move in the slightest. Test your seal by picking the jar up by the glass lid (don’t go crazy, just lift an inch or two above the countertop). It should hold fast. If it doesn’t, your seal is no good. If it holds, leave the wire unlocked and store as you would any other sealed jar. 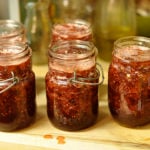 124 thoughts on "Canning in Vintage Jars"