Canning 101: What to do When a Jar Breaks in the Canner 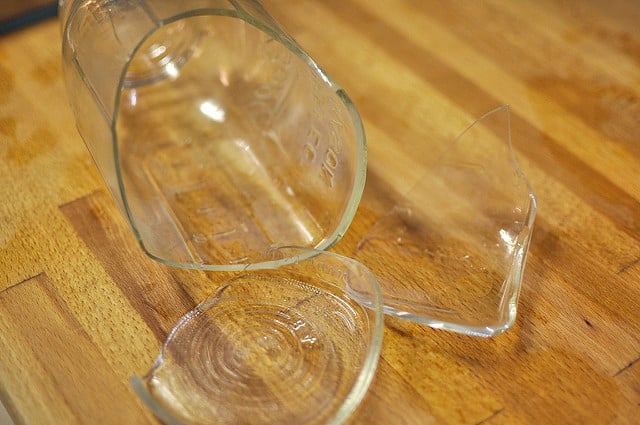 At 11 p.m. last night, I was in my kitchen doggedly trying to complete the canning project I’d started hours before. I’d made stock from a turkey carcass a friend had given me (knowing that I didn’t get a chance to roast a bird, this friend froze his remains for me after all the meat was picked away. I know such good people) and was nearing the end of the process. The stock was strained, defatted, funneled into jars and in the pressure canner when tragedy struck. A jar broke.

I had just put the lid on the pressure canner and was venting it before beginning to raise the pressure when I heard a quiet snap. Though it doesn’t happen to me often, the sound that a jar makes as it cracks is etched into my kitchen existence and I recognized it immediately.

After a few choice expletives (my grandma Bunny called it “work language” and would have certainly approved its use in this circumstance), I pulled the lid off the pot and surveyed the scene. The stock from the broken jar was draining out into the canner and there were several chunks of floating glass. I pulled the good jars and set them on a cutting board (wood is always better in this situation than cold countertops made from granite, marble, steel or even formica). Using tongs, I fished the broken pieces out of the pot. Lifting the pot off the stove, I poured its contents into the sink, rinsed the pot and replaced the necessary water with the hottest my tap could produce.

The pot went back on the stove over the highest heat possible with the lid on. My goal was to raise the temperature of the water back to near-boiling level as quickly as possible, so that my hot jars of stock didn’t have a chance to cool down too much before I was able to put them back in the pot. However, I didn’t want to put them back in before the water had a chance to heat a bit more, since I know that my hot tap water tends to be around 180 degrees and those jars were hovering right around the boiling point. The last thing I wanted to deal with was more broken jars.

When the water was nearly at a boil, I returned the five remaining quarts of stock to the pot and began the process of venting, pressurizing and then monitoring the pressure. It was after 12:30 a.m. when the processing time was up. I was grateful to be able to simply leave the canner to depressurize and cool on its own and headed to bed.

There are important things to be learned from this experience. Here’s what I think the key points are:

Now that you’ve heard my tale of woe, let’s hear your stories of canning misfortune. Have you had a jar break? How did you handle it?