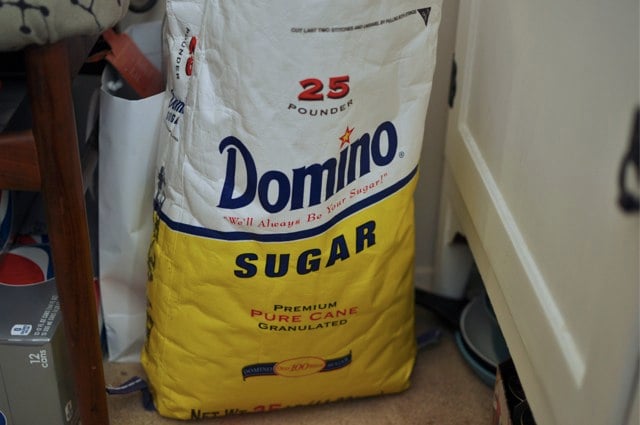 The summer canning season entered its stride recently and ever since, I’ve been getting a ton of questions about sugar. I’ve written a lot of about sugar, but it’s mostly been buried in a variety of other posts. I figured it was time to devote an entire post to the stuff, since it is used so often in food preservation.

Sugar plays two roles in homemade preserves. First, it helps with set. Jam making has a lot in common with candy making, in that you are attempting to harness sugar’s ability to change texture at different temperatures. Jam is cooked to 220 degrees F, which is known at the gel stage. At this temperature, the heating sugar will bond with the pectin in the fruit and provide structure and spreadability.

This is particularly important when you’re working without additional pectin, but is also necessary even when you’re working with commercial pectin. If you’ve ever had a situation in which you’ve drastically reduced the amount of sugar in your recipe and then found yourself with a very runny product, this is why. You didn’t have enough sugar to elevate the temperature and so you weren’t able to cook to the set point.

Second, sugar acts as a preservative. High sugar products have a much longer shelf life than those with little to no additional sugar. This means that a low sugar fruit butter won’t last as long in your pantry as a jam made with a full complement of sugar. Fruit preserved in light syrup won’t hold as long as that preserved in a heavy syrup.

This also means that preserves made with alternative sweeteners and honey will also not last as long as those made with sugar. This is not to say that you shouldn’t sweeten with those alternatives, but it’s important to understand how it will impact your finished product before making those swaps.

To recap, sugar helps with set and it makes preserves last longer. That’s it. It does not make things safe. It is not a substitute for proper acidity. It does not inhibit the growth of botulism. If you want to reduce the amount of sugar, or replace it with an alternative, know the implications.