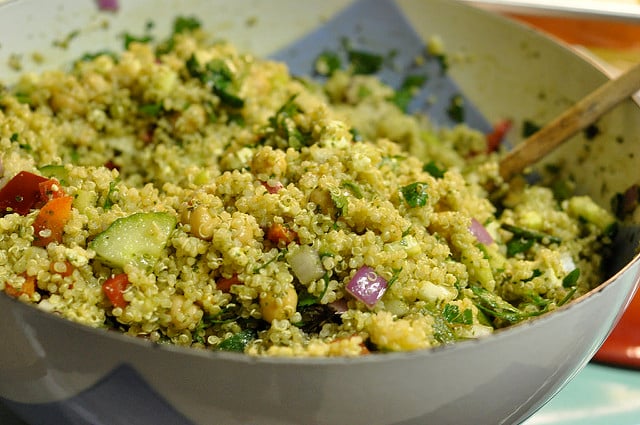 Last September, I spent a frantic Friday evening processing two gallons of freshly picked basil into pesto. I was leaving early the next morning for a long weekend, and couldn’t bear the idea of allowing it to wilt into sludge. During the making, covering my kitchen from one end to another with smudges of green, I questioned my sanity. However, with many such acts of culinary will, having that pesto has proven to be a gift throughout the year. 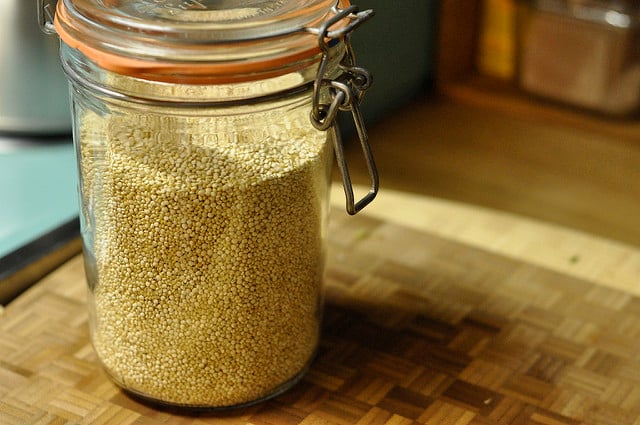 Packed in four and eight ounce jars, the pesto has kept perfectly in the freezer. A day or two before I plan on using some, I move a jar from freezer to fridge and let it slowly defrost (to be perfectly honest, you can defrost a jar up to a week before you plan on using it, as long as you keep it unopened).

Yesterday, knowing I had a jar of this gorgeous pesto ready to be used, I started imagining a giant quinoa and vegetable salad. Now that the weather has warmed up and the daylight lasts into the dinner hour, it feels delightfully right to eat cool, grain-y*, crunchy meals again. Once home, I simmered two cups of quinoa (treat it just like brown rice, with a 2 to 1 water to grain ratio) and roasted off my first bundle of spring asparagus. While those things cooked, I chopped cucumber, red pepper, celery, red onion, flat-leaf parsley and drained a can of garbanzo beans. 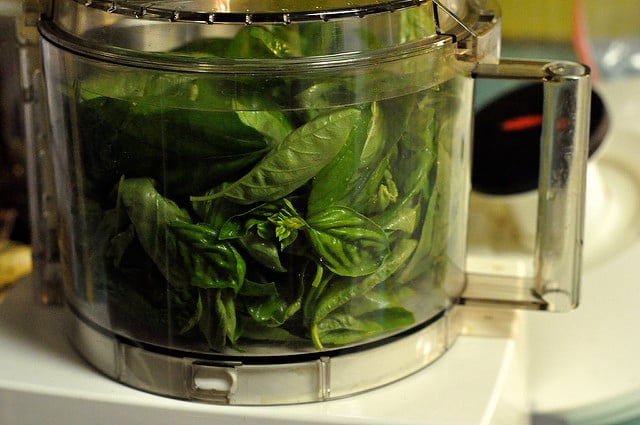 I whisked the four ounce jar of pesto with a couple tablespoons of apple cider vinegar and drizzled some olive oil in until it was pourable. Once all the ingredients were combined (quickly cool the quinoa on a cookie sheet, so that it doesn’t heat up your veg too much), I crumbled six ounces of feta on top, poured on the dressing and stirred until everyone was well-combined. 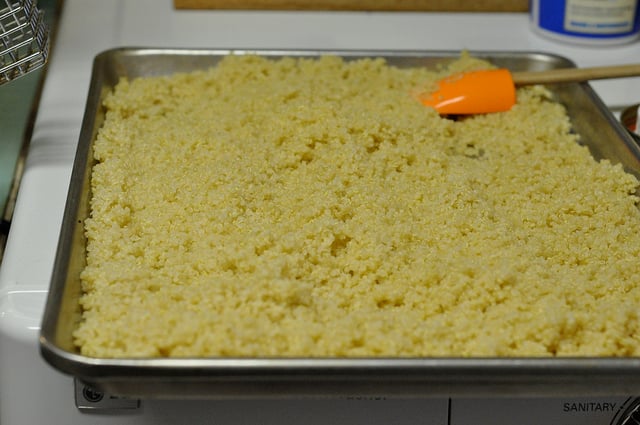 The great thing about salads such as this is that you can adapt them to ensure that they taste good to you. I happened to be married to a guy who is hugely skeptical of my “hippie salads.” Because I know I need to win him over, I don’t put things in that would give him pause. This means skipping tomatoes, capers, toasted nuts or something sweet like cranberries or currants. However, these would all make excellent additions (and sometimes, I top my own serving with some nuts or a few raisins).

Happily, it only took one bite for this meal to be Scott-approved (he ended up having two big platefuls). I’m so looking forward to more meals like this one, as the weather continues to warm and vegetable season moves into full swing.

*Yes, I know that quinoa isn’t actually a grain, but it does an excellent job imitating one in situations such as these.

Organized recipe is after the jump… 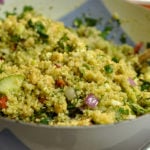