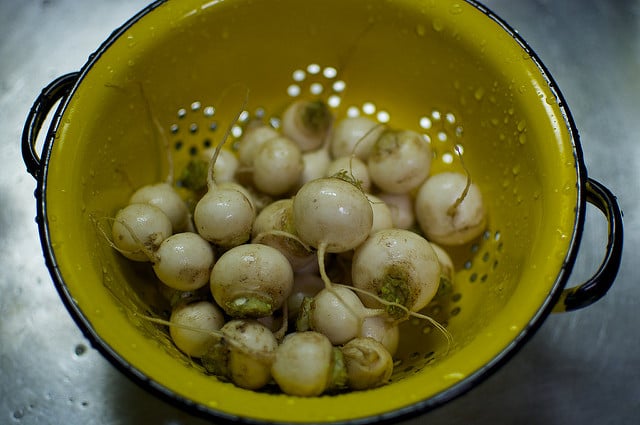 The Saturday before last, I didn’t manage to get over to the farmers market until 20 minutes before closing. By that point, the pickings were very slim. I had been hoping for some kale, or a head of frost-sweetened cabbage, but the only produce on offer was a few crates of apples, fresh mushrooms hauled in from Kennett Square (the self-proclaimed mushroom capital of the world), and a single pint of tiny, white turnips without their greens.

I had stocked up on apples the previous week and still had plenty left. While I love mushrooms, Scott is entirely turned off by their texture, and so I buy them rarely. But the turnips, they gave me plenty of ideas and so I traded a couple crinkled singles for that lonely pint. I’d forgotten to bring any small produce bags, and so the vendor decanted them into the only bag she had, an enormous plastic shopper, best suited for carrying two pillows or a down comforter.

In the past, I have happily made quick vinegar pickles from little turnips such as these (in fact, there a recipe for exactly that in Preserving by the Pint). However, I’ve been feeling increasingly excited about fermented lately (and by lately, I mean the last six or so months), and so wanted to treat these little guys to a salt brine process. 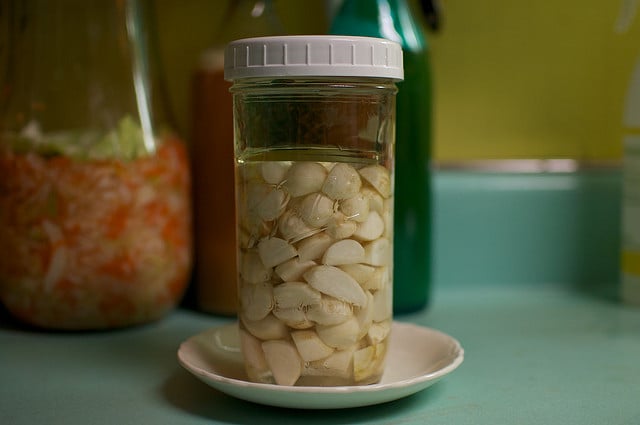 I spent a meditative 15 minutes at the sink, rinsing off the dirt and trimming away the skinny roots and the remains of the leaves. It was quick, satisfying work and reminded me of why I like little batches so much. You can work slowly and carefully, and still have the bottom of the colander appear in no time flat. If I’d bought any more turnips, I might have started to resent them before I came to the end of the prep. And nothing spoils my enjoyment of a preserve faster than resentment.

The washed, trimmed, and quartered turnips went into a squeaky clean pint and a half jar. I covered them with salt brine (made earlier in the day by dissolving 1 1/2 tablespoons of sea salt in two cups of boiling water and then letting it cool to room temperature). Then I sat a quarter pint jar in on top of the veg and filled it up with brine, so that it could serve as a weight and keep the turnips fully submerged.

I’ll confess right now that these pickles aren’t quite done yet. The turnips spent a few days in the fridge between the time I brought them home and the moment I was able to get them into the brine. But I know that in another day or two, they will be crunchy, tangy, and perfect eaten on avocado toast, or alongside roasted root vegetables (it’s always nice to have a crisp, punchy counterpoint to sweet, soft, warm foods).

What are you bringing home from the farmers market these days? 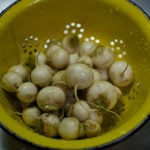