In yesterday’s post about fancy salts, I mentioned that I would be sharing a couple of tasty ways to use these more esoteric salts in batches of pickles. This first recipe is one that uses a generous teaspoon of fleur de sel (though you can also use kosher salt if that’s what you’ve got) to pull some liquid out of the cucumbers and firm up their texture a little.

. I made it for the first time last year and it rapidly became one of my favorite things to eat (so crunchy! so spicy!). However, it’s the sort of thing that should be made and eaten within the same hour and so I tried to make a version that would keep its texture a little bit longer.

How to make these spicy quick pickled cucumbers

You start by peeling, seeding, and slicing the two cucumbers. Heap the pieces in a bowl and sprinkle with one teaspoon of fleur de sel. Using your hands, massage the salt into the cucumbers and then let them sit for about half an hour.

When the time is up, there should be a goodly accumulation of liquid in the bottom of the bowl. Drain that out, toss the cucumbers again and try draining them once more. I tend to do this three or four times, until the cucumbers aren’t releasing anymore water.

While the cucumbers sit with the salt, mix up the pickling liquid (all the exact amounts can be found in the organized recipe below). It’s a slurry of grated garlic, grated ginger, sugar, soy sauce, rice wine vinegar, toasted sesame oil, and gochugaru (that’s the coarse ground red chili powder used to make kimchi). Finally, combine the cucumbers and the dressing and stir to combine.

You can eat this pickle immediately (truly, it’s one of the quickest), or you can funnel it into a jar and eat it by the forkful over the next day or two. It’s fiery from the chili powder and garlic, and I find it endlessly delicious. 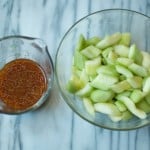