This spiced apple butter is made in a slow cooker, which means that it is almost entirely hands off. I like to make this in the autumn and squirrel it away for holiday gift bags.

Since I was very young, I’ve been something of a collector. I figured that if having one of something was good, then having three or four was even better. As a kid, this meant that I had more pens and pencils in my school bag than necessary and felt most comfortable when I had a back-up security blanket.

In my adulthood, this propensity towards duplication has most actively manifested itself in the kitchen. I have at least two dozen wooden spoons and spatulas (when just a handful would really do), three vintage waffle irons (because you never know when one might break) and five slow cookers.

There’s no really good defense for the wooden implements or the waffle irons, but I do have a rationale for the slow cookers. My slow cooker needs often vary and so having different shapes, sizes and eras to choose from give me options.

Dips go in the mini-cooker. When I make overnight oatmeal, the 2 1/2 quart pot is best. If I’m doing a batch of blueberry butter and want really low, slow heat, nothing works better than my vintage, 4 quart, harvest gold cooker. I also have kept a basic 6 quart cooker in the rotation for a while for stocks and soups, though I must confess, it has never been my favorite.

Then there’s slow cooker number five. It joined the line-up recently and rocketed to the top of my slow cooker hit parade. It’s the Hamilton Beach Set ‘n Forget model, with a lid that can be locked into a place and a thermometer probe that you can use to test internal temperatures without lifting the lid and releasing the heat. It allows you to set the cook time and temperature (when the time is up, it shifts to a keep warm setting).

This time of year, my slow cookers are in regular rotation for the production of apple and pear butters. I typically go with my vintage cooker, because I know that I can trust it not to burn (older slow cookers have lower set temperatures than the newer models). However, because of its capacity, it ends up yielding just a couple of pints. As you know, most of the time I like a small batch just a little more than the next girl. During the holiday season that changes and  I appreciate the option of larger yields for gift giving.

I realize now that I’ve avoided the newer cookers and their higher temperatures because I’ve never worked with one that had an auto shut-off before. I tend to let my fruit butters cook overnight. That was too much time for my brute force, either-on-or-off cooker. But having the option to set it to cook for 5 or 6 hours and then shift to warm has changed everything. I know this technology has been around for a while (my mom had a slow cooker when I was little that did something along these lines), but I’d never before experienced it. I am in love.

My fruit butter yields are higher because the new Hamilton Beach machine has a larger capacity and I’m not running the risk of burning the butter because it shuts off when I ask. I am a happy canner.

Before we get to the apple butter recipe I’ve made three times in the last month in machine, I have to tell you one more reason why I really like it. It’s that “Stay or Go” feature. This slow cooker has a lid fitted with a silicone seal that can be locked into place. That makes it an able traveler, which is terrific for a regular potluck-attender like me.

I used it to transport and serve mashed potatoes on Thanksgiving (sadly, they were the worst mashed potatoes I’ve ever made; both lumpy and gummy at the same time. But the quality of the potatoes wasn’t the cooker’s fault) and it will be pressed into travel service again soon.

The formal recipe I’ve been using for this slow cooker apple butter is down below, but here’s the narrative version. You begin by filling your slow cooker to the top with sliced apples (I got about eight pounds into my cooker, but there’s some natural variation here). You add a little water (maybe 1/2 a cup) to help things along and then you let the cooker for for four to six hours on low, until you can mash the apples into sauce.

Then you puree the heck out of the applesauce, until the skins disappear. It works best in my Vitamix, but I’ve also achieved this same effect with an immersion blender and persistence. Then you return the puree to the slow cooker (it will only fill it 2/3 of the way up at this point) and cook on low for another six or so hours with the lid slightly askew for venting purposes, until the sauce has reduced into butter. Stir in sugar, spices, and lemon zest/juice for balance. That’s it! Making spiced apple butter is so easy and makes such good holiday presents! 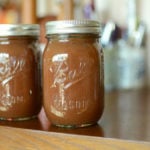 My batch yielded just over 3 pints, but with all things that depend on reduction, yields will vary. I can see this batch ranging from 2 to 4 pints, depending on the water content of the apples and the length that you cook them. This recipe can be canned in pints, half pints, quarter pints or any other small jar designed for boiling water bath canning. All jars pints or smaller are processed for 15 minutes. Should you want to can it in quarts, increase processing time to 20 minutes.