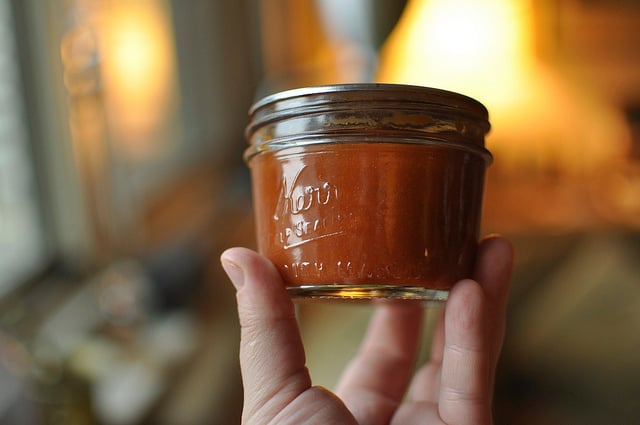 Yesterday was a two slow cooker day in my apartment (and apparently, I’m not the only one turning to a slow cooking during this heat wave). My six quart crock spent eight hours cooking a pork butt in unctuous submission (in a slurry of tomato butter, plum jam and cider vinegar) while my vintage four quart workhorse turned nine cups of peach and apricot puree into five cups of fruit butter.

Now, I’ve posted about fruit butters before. There’s my basic post about how to make a fruit butter. The orange-rhubarb butter. Strawberry-rhubarb butter. Blueberry butter. Tomato butter. There’s even a Q&A devoting to clarifying issues around making butters in the slow cooker. Obviously, this is well traveled turf in my kitchen and on this blog.

But it’s worth mentioning again. Because it’s so damn good and easy. This most recent butter of mine combines five cups of apricot puree with four cups peach puree (the proportions were born out of what I had in my kitchen, you don’t have to be wedded exactly to what I did).

Combine in the slow cooker and cook on low for 8-10 hours, until it reduces by nearly half (prop the lid with a wooden spoon, so that the steam can escape). Add sugar to taste (this batch received 3/4 cup granulated white sugar). Process with an immersion blender should you want a finer texture. Funnel into jars (leaving 1/2 inch headspace) and process in a boiling water canner for 20 minutes.

That’s it. You can use more sugar should you feel the need. You could add a little bit of cinnamon. A vanilla bean in the slow cooker along with the fruit could be nice. Lemon zest should it need a zing (this batch was plenty tart all on its own).

*Before you ask. No, you cannot process jars in a slow cooker. You can ONLY use it to cook a preserve.