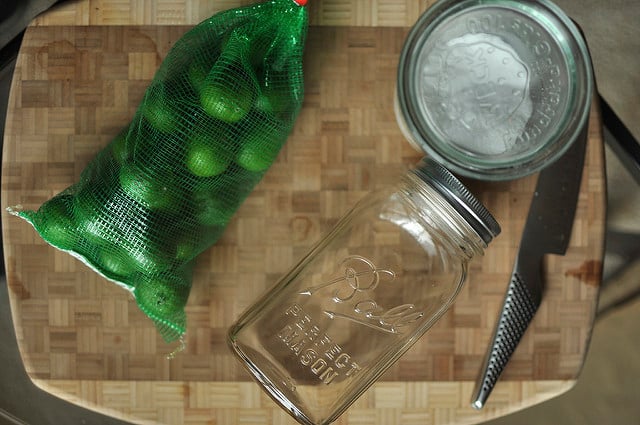 I’ve been writing a lot here in the last week and a half, but I realized that this morning, that none of it has really been the meat and potatoes of why this site exists. There’ve been a lot of announcements, notifications and favors done for friends, but no recipes. No ruminations on canning or anything really that makes up the heart and soul of Food in Jars.

For that, I apologize. I’ve been tangled up in four-part to-do list that hasn’t left me a lot of time for the kitchen. It’s been hard to find a groove for even the most basic cooking. Last night, I ate toasted corn tortillas of unknown age topped with melted cheese and sriracha and some roasted broccoli. 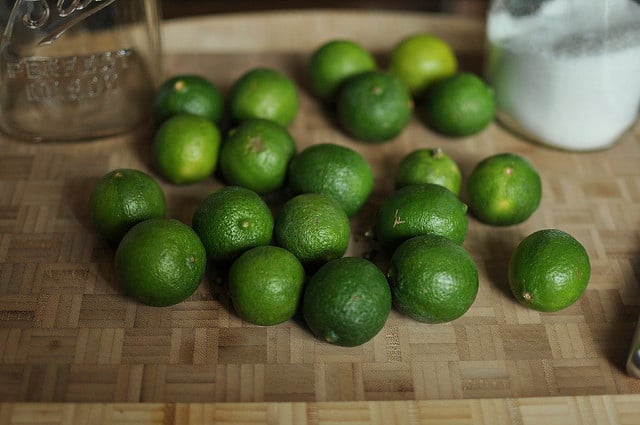 I decided to duck the demands of the to-do list for just a little while and show you a project I started back in February. Salt preserved key limes. I’ve had them fermenting on the kitchen counter for a few weeks and finally moved them to the fridge last night. The finished limes are nicely softened and have that same intoxicating salty tang that preserved lemons develop. 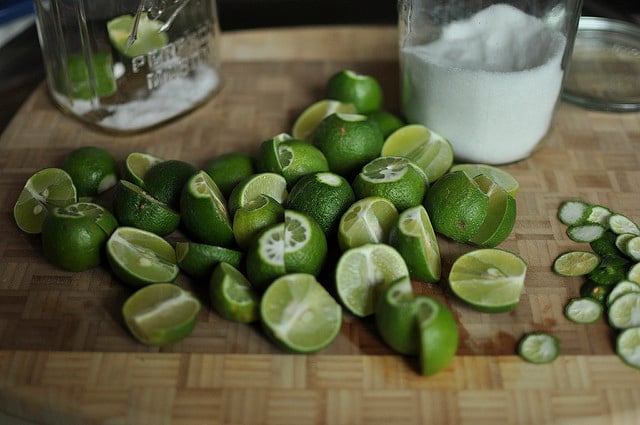 I started these as a grand experiment, after finding a one-pound bag of organic key limes while grocery shopping. I hoped that they’d work like lemons do when packed in salt. I was also hopeful that I’d be able to create something akin to the pickled limes featured in Little Women.

I didn’t hew to any particular recipe from the past. I trimmed the ends, cut them in half and packed them in salt, hoping that the exposed flesh would help the salt do it’s work of releasing juice and creating a briny liquid for the limes to rest in. 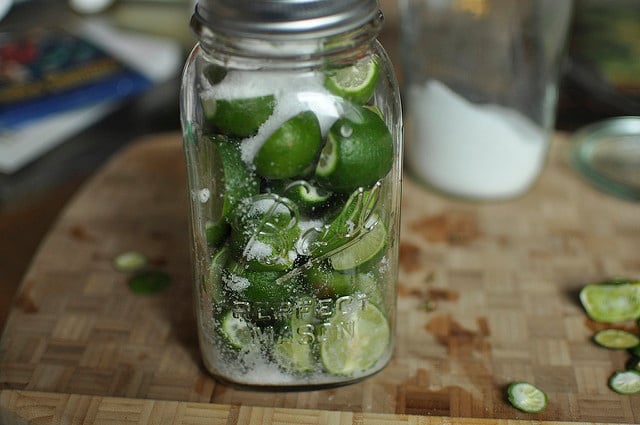 I didn’t measure the salt, but instead just covered each layer of limes with a generous spoonfuls of sea salt. Once the jar was filled, I shook it madly, trying to spread the salt and bruise the fruit a bit.

After a day, the limes weren’t expressing much in the way of liquid, so I helped things along by adding enough bottled lime juice to cover. I didn’t want my precious little limes to succumb to mold before they could ferment sufficiently. 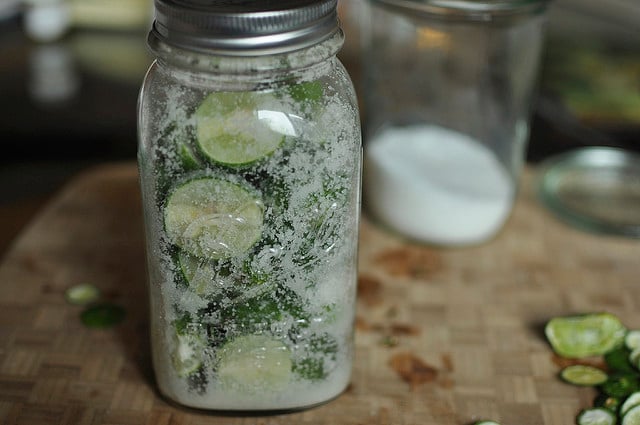 Once covered with juice, they fermented happily on the kitchen counter a little less than a month. If you choose to make these, know that your time could vary from mine. Depending on the temperature of your kitchen, the amount of salt you used and the fruit’s ripeness, they could be ready sooner or later.

Make sure to put a small saucer or plate under the jar while they “cook” as there’s always a little bit of leaking brine with this kind of preserve. I forgot to do this in the beginning and the jar ended up stuck fast to the counter. I had to create a little puddle of water around its base to be able to move it. Even after years of preserving, I still make silly mistakes regularly. 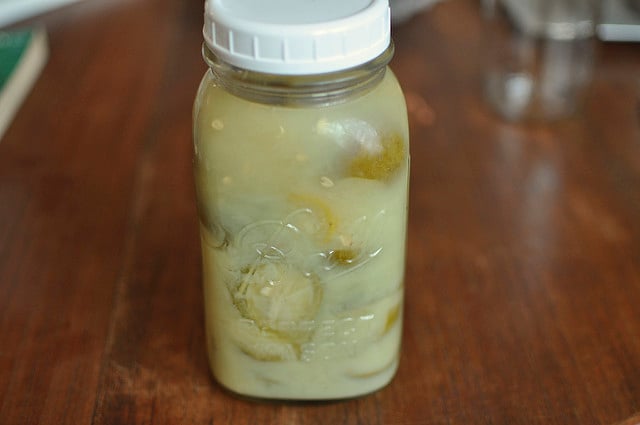 Here’s what the finished limes look like. The fogginess comes from the bottled lime juice. Had I squeezed some fresh it would clearer. Thankfully, the taste is still strong and good.

You might be wondering what one does with salt preserved limes. Well, they can do anything that a preserved lemon can do, namely add a tart, salty bite to stews, tagines and other bits of rich meat.

However, I have discovered one particularly good partner for these limes. Avocados. The salty, fermented juice is a dream drizzled over a cut avocado (and helps prevent browning too!). You can mash up the pulpy flesh and a bit of the rind when making a batch of guacamole.

I must confess, there is another way I eat these. And that’s straight from the jar and sliced. My dentist wouldn’t approve (all that acid), but I like just a little nibble or two. On days when the things I’ve eaten have been boring or bland, just a taste of these limes brightens everything, including my attitude.