An approachable, easy going sauerkraut, this red cabbage apple ginger kraut fits the bill for anyone in the market for a mellow, delicious ferment.

I spent a goodly amount of time pondering what I’d make in my Yaozu 2L Fermenting Crock for its maiden voyage. First I considered a basic batch of kraut (but I already have multiple jars that I’m working through). I thought about kimchi (but again, there’s a surplus in the fridge). Eventually, I settled on the combination of red cabbage, apples, and ginger.

At least three days out of seven, I eat some kraut for breakfast. And while I enjoy spicy, garlicky, pungent cabbage with my eggs, sometimes I’d like a slightly gentler ferment to have alongside a piece of toast or some oats. This bright pink red cabbage apple ginger concoction, made just a little bit sweet with the apples, seemed like it would fit the bill.

This is an incredibly quick kraut to prep, particularly if you have a food processor to help with the slicing. I fitted my wide mouth Magimix with the slicing blade and ran the cabbage through in less than a minute. I swapped in the shredding blade and made quick work of the apples and ginger.

Once all the produce was prepped and in my biggest mixing bowl, I added 2 1/2 tablespoons of salt, mixed it in well and let the whole thing sit for about half an hour. If I wanted to get the cabbage into the crock more quickly, I could have worked and kneaded it to speed things along, but I had the time and so let it wilt under the influence of the salt.

Half an hour later, the cabbage had released a whole bunch of liquid and was ready to go into the crock (which I’d washed earlier in warm, soapy water). When it was all in the crock, I tucked a couple of large leaves in on top of the shreds, and used the weights to keep things tamped down. Then I filled up the water channel about half way, set the lid on, and put the whole thing on a plate in case there was any leakage.

It’s been bubbling on my dining room table (since it’s a ceramic crock, there’s no worry about sunlight). I’ve already snuck a taste and even young and half-fermented, and it’s delicious. Perfect for eating alongside breakfast.

Read on for the red cabbage apple ginger kraut recipe! 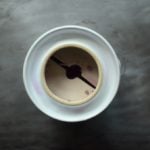