Preserves in Action: Stovetop Toasties for a Snow Day 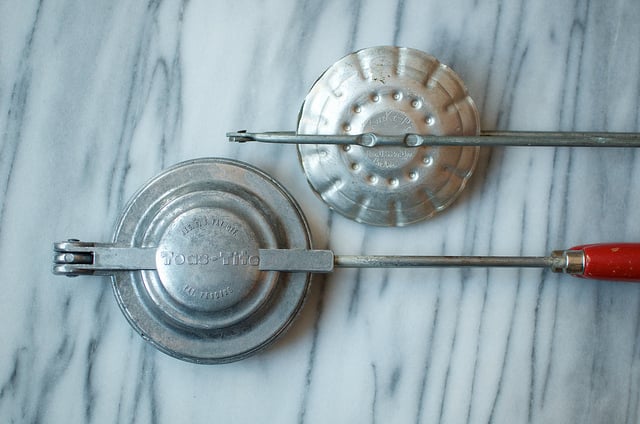 Like most of the northeast, Philadelphia woke up this morning to a thick layer of snow. Though I didn’t venture outside to measure, friends in the next neighborhood up from ours had 8 inches on their back deck and I hear that there were some areas that got even more. I had to cancel the class I was scheduled to teach and Scott’s office was closed, so we hunkered down for a cozy snow day. 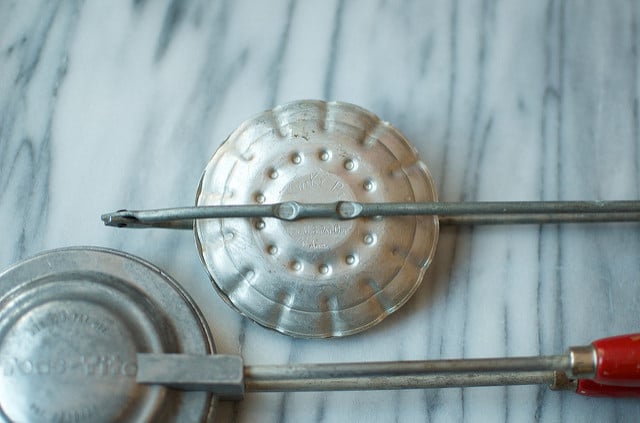 Thankfully, I braved the pre-storm crowds at Trader Joe’s yesterday and so the fridge was fully loaded for a day at home (it was my first full shop since getting back to town on Monday, so things would have been pretty stark otherwise). As we contemplated lunch, Scott made an off-hand suggestion that I should write a post about using jams on a snow day. 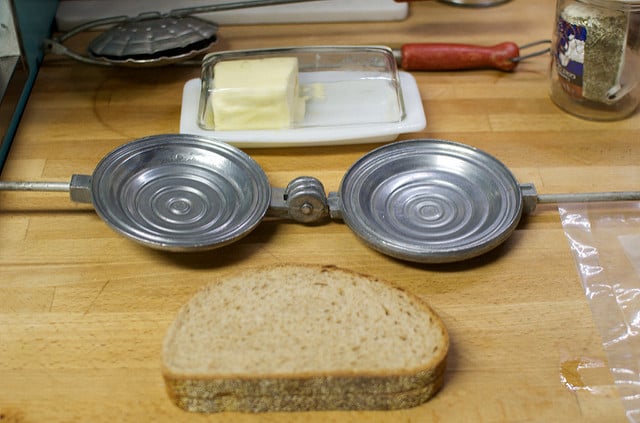 As soon as he said it, I realized that it was the perfect day to pull out my old stovetop sandwich makers and toast up a few jam-filled treats. I’ve had these two pie/sandwich irons for ages now and don’t use them nearly enough. My mom grew up making sandwiches in a Toas-Tite at her aunt’s house, and so when she spotted on at an antique mall some years back, scooped it up and gave it to me for Christmas. The KwiKi-Pi (don’t you just love the name?) cost a quarter at a Lancaster County garage sale some years back. 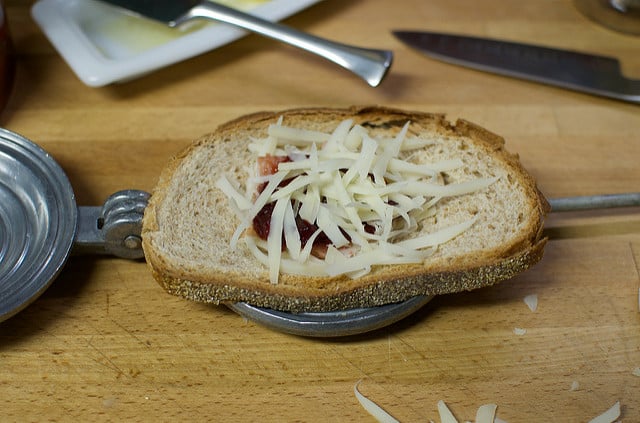 There’s nothing fancy about either of these gadgets, though I will say that the I find that the Toas-Tite delivers a better finished product than the KwiKi-Pi (it’s heavier and seals better). There are other vintage brands out there, like Nutbrown Sandwich Toaster and Jem Toaster, and there a handful of companies who still make these kinds of irons (like this round one

). There are also electric sandwich makers that do the same sort of thing, but I like these lo-fi ones better. 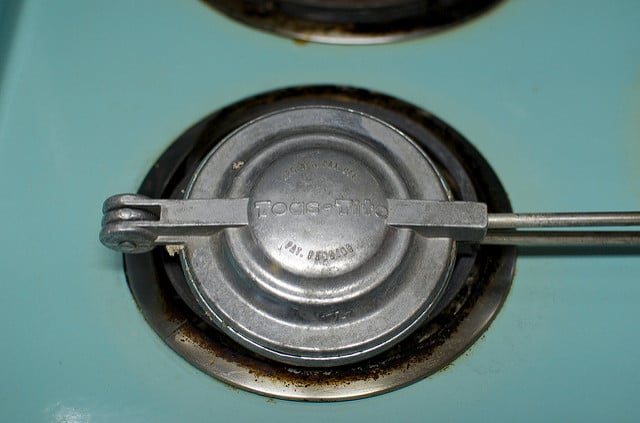 The way it works is that you take a couple pieces of bread, flatten them out a little with a rolling pin to create a little extra filling space, and lightly butter the outsides like you would a grilled cheese. You fit the first slice into the bottom of the mold (don’t worry about the overhanging bread yet), and fill. Go light to the fillings so that the sandwich doesn’t ooze during cooking. 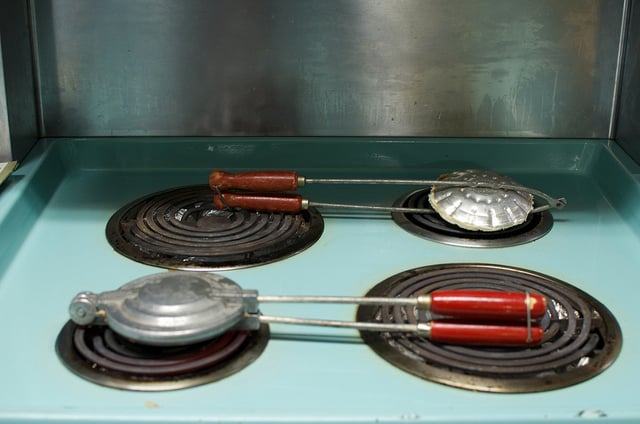 Once the fillings are in, you line up the top piece of bread and close the Toas-Tite down. Then, using a paring knife, cut away the overhanging bread, taking special care around the hinges, as that spot can sometimes trap some large crumbs (save those crusts for homemade bread crumbs!).

Because I have a pokey old electric stove, I preheat the smaller burners to medium-high  while I construct the sandwiches. When the burners are hot, you just lay the sandwich makers directly onto the burners. If you have a gas stove, you proceed in much the same way, though you shouldn’t need to preheat. Turning regularly, your sandwich should be done in four or five minutes. 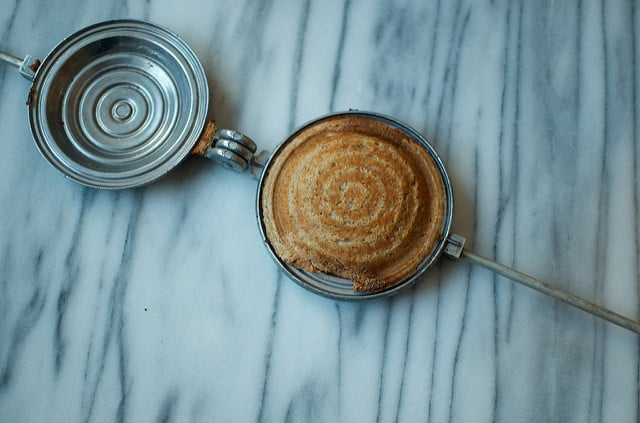 For my first sandwich, I used a combination of prosciutto, shredded cheese, and tart plum jam on whole wheat. For the second round, I flattened a couple hot dog buns that Scott had picked up while I was away and stuffed them with herbed goat cheese and apricot jam. Of course, you can fill your sandwiches with anything you want, but keep the number of ingredients fairly low. Any more than three or four ingredients and the flavors start to get muddy. 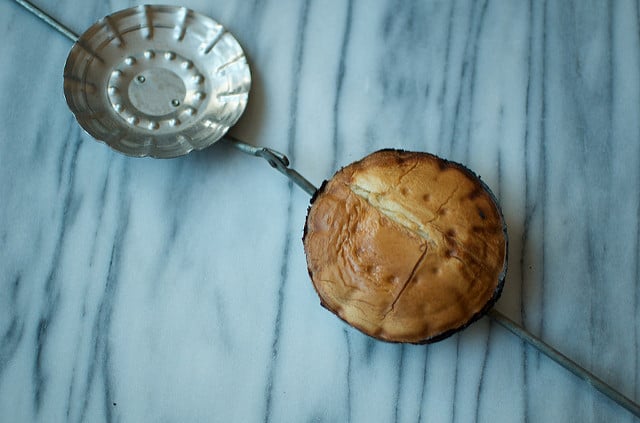 I realize that in some ways, these are nothing more than homemade Uncrustables, done with fancy ingredients. But made with kids, or on a snow day when you just feel like a kid, they’re a very fun treat. And they’re such a good way to use up your jams and chutneys in a slightly different way. 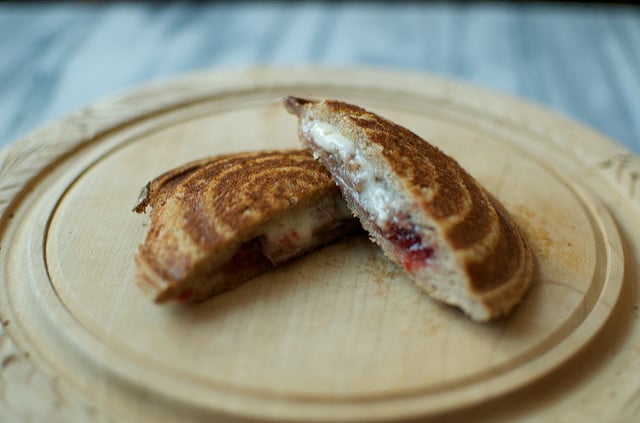 How are you guys using your preserves these days?

21 thoughts on "Preserves in Action: Stovetop Toasties for a Snow Day"