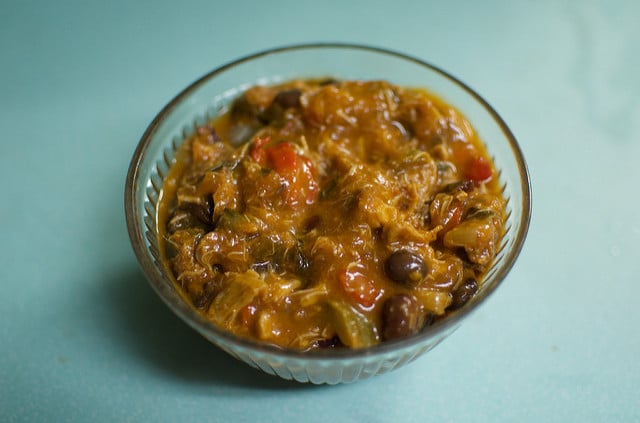 On Wednesday, I wrote about how to make your home canned beans from dried (have you entered the giveaway sponsored by Mighty Nest yet?). Since so many of you mentioned in the comments that you like to use canned beans in chili, I thought that I’d share the basic chili recipe I use all the time. It uses 2-3 jars of beans and at least 2 quarts of preserved tomatoes.

When I have the time, I braise boneless skinless chicken thighs in puree of tomatoes, onions, garlic cloves, and fresh cilantro leaves until they shred easily. If I’m running short on time, I skip the braised chicken and instead just stir a pound ground turkey meat directly into the cooking chili (in that case, I add both jars/cans of tomatoes directly to the cooking chili). Of course, another option is to skip the meat entirely, but it would make my husband sad if I did that in our household. 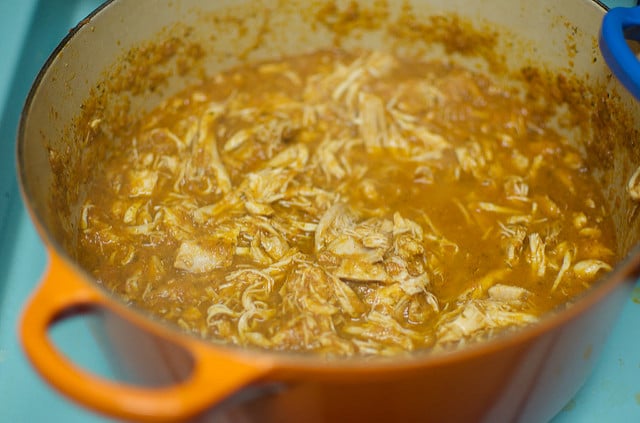 Let’s have a word about this shredded chicken. It’s an awesome addition to chili, but that’s not all it’s good for. I’ve been known to eat it wrapped in a tortilla or spooned over some braised greens. It’s incredibly flavorful and easy to make. I’ve taken to keeping a batch stashed in our freezer for lazy nights. Oh! One last thing about this chicken. Sometimes the onions make it a little bit sweet and so I’ll add either a splash of lime juice or the brine from a jar of pickled jalapeños to balance things out.

My apologies for the less than stellar photos in this post. I made this chili for dinner one night and forgot entirely to take pretty pictures. I snapped the image at the top of the post (it was the very last bowl) just moments before I ate it for a quick solo dinner. And we all know, the total lack of natural light in my kitchen makes photography hard, even on the most lovely natural light days.

But enough of that. On to the recipe! 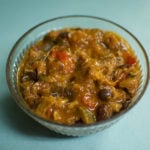