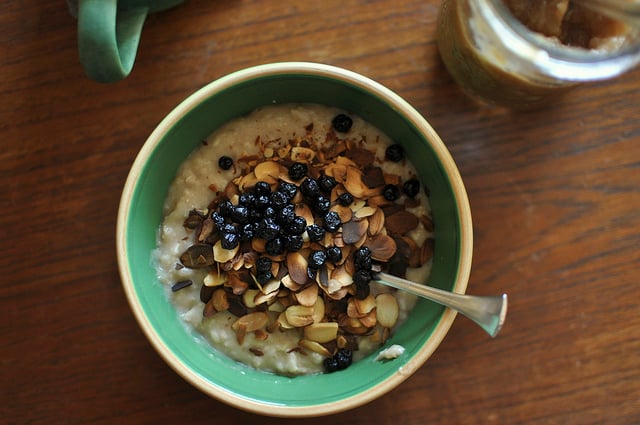 Last week, just before I hopped a plane for Portland, I made applesauce. I had gone apple picking with a friend over the weekend and needed to do something with all the apples that I couldn’t jam into the crisper.

I quartered and cored enough apples to entirely fill my 9 quart Dutch oven, added a splash of water to prevent them from sticking and cooked over low heat for an hour or so, until the chunks of fruit lost their shape and slid away from their skins. I ran the cooked apples through a food mill fitted with the coarsest screen to remove the peels and spiked the finished sauce with cinnamon and freshly grated nutmeg.

That batch made enough to fill a canner load of seven pint jars, plus a little bit more. Once the jars were on the counter cooling (they spent 20 minutes in the boiling water bath and did siphon more than a little – it happens to the best of us) I was able go on my trip, unencumbered by thoughts of wilting fruit. 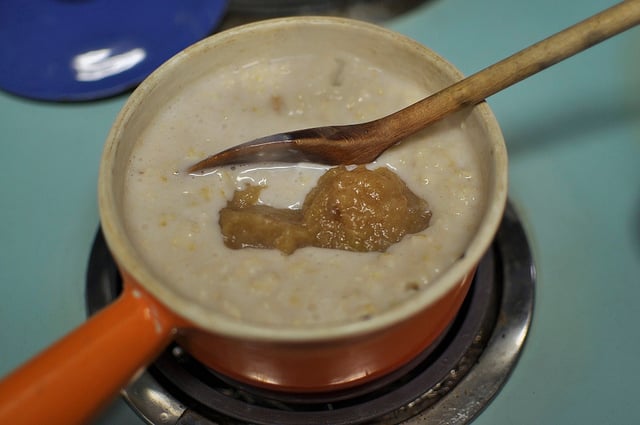 I got back late Wednesday night to an apartment that my husband thoughtfully and vigorously cleaned. You see, before I had left, I had woken up one morning, feeling mad at him. Once I cleared the cobwebs, I realized the anger was the result of a dream, in which he had trashed our home and I had to come home to a mess. I shared the dream with him when the feelings of it were still fresh and I think it made an impression.

Thursday morning, more than a little jet lagged, I stumbled to the kitchen to find coffee and breakfast. There was fresh milk, old fashioned oats in the jar on the counter and the rest of the applesauce that hadn’t fit into the canner load I’d done the week previous.

In my smallest saucepan, I combined half a cup of oats with one cup of cold water and a pinch of salt. Covered and set to low, I let the oats slowly warm. This makes them wonderfully creamy (if you start with hot water and cook the oats too quickly, they never break down nicely). After six or seven minutes at the barest simmer, I raised the heat and brought the oats to a bubble. Once they were nearly done, I stirred in a splash of milk and half a cup of the applesauce.

Adding applesauce to oatmeal does two things really well. It contributes flavor (in this case mild sweetness and a hint of cinnamon) and it bulks them up without making them an overly indulgent meal. I often do the same thing with fruit butters, though since they can be more intensely flavored, I reduce the volume to a third of a cup or so.

I topped my bowl with toasted almonds for protein and some dried blueberries for more sweetness. I predict many more morning bowls of applesauce oatmeal in my future this fall.

21 thoughts on "Preserves in Action: Old Fashioned Oatmeal with Applesauce"