Regular Food in Jars contributor Alex Jones is here to with a recipe to preserve delicious shishito peppers. They’re one of my summer favorites! – Marisa 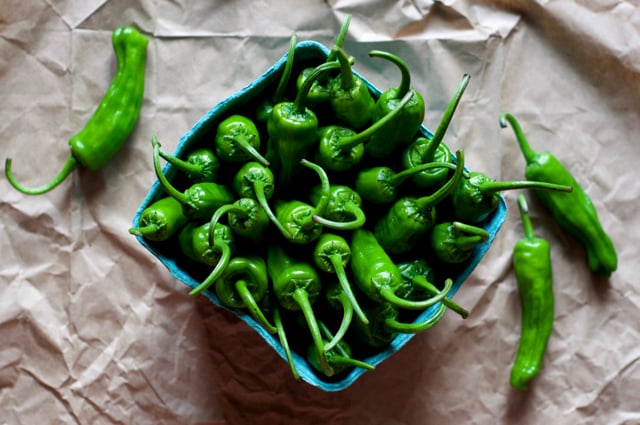 One of my favorite moments of summer eating doesn’t involve handfuls of blueberries, icy-cold slices of watermelon, or peaches so juicy you have to eat them over the sink. (Although those firsts fruits are up there on the list.) It’s when I spy the first shishito peppers at the farmers’ market.

When I first see those wrinkly, electric green peppers heaped in a basket or bursting out of a fiber pint container, I know I have to have them.

Back my kitchen with my market bounty, I’ll get my cast iron pan ripping hot with a glug of grapeseed oil and add the peppers, cooking for a few minutes on each side until the skin is blistered deep brown and the flesh is just tender. Then, they go into a bowl with a big three-finger pinch of flaky sea salt. A few flicks of the wrist to toss, and then I’ll sit down and eat them all, one by one.

But inevitably, shishito season ends, and it’s rare to find them off-season in supermarkets, so I have to wait for that smoky, salty experience until next year’s pepper feast…unless I can preserve it.

After cooking and devouring the first pint of the peppers I brought home from the Urban Girls Produce stand in Clark Park last week, I knew what my hot-pack project for July’s Mastery Challenge would be: those precious shishitos, with some of that irresistible charred goodness and plenty of bright, tart flavor from the pickling liquid.

I picked a basic brine recipe and decided I’d pack the jars out with garlic, shallots, and black peppercorns for bite. (While I’ve read that one in 10 shishitos can pack a little heat, I’ve never had one like that — they’re quite mild.) And since it’s bursting out of my front yard garden plot, I ran down and picked a nice big handful of basil — lime and opal — to infuse their flavor. 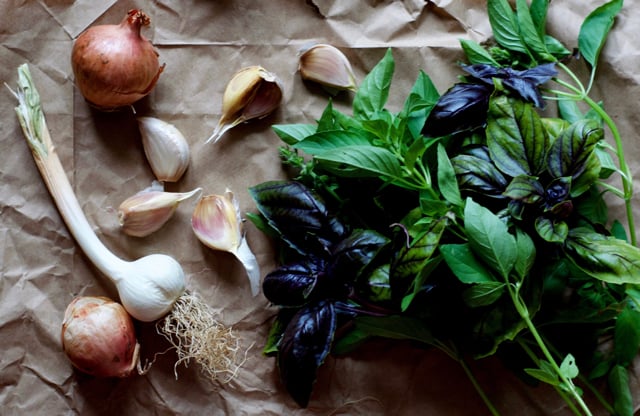 First, I prepped a water bath canner, lids, and jars and set my cast iron to get nice and hot. Then, I snipped the long stems off of the peppers and sorted them into two batches, slightly smaller and slightly bigger, to help them cook evenly.

When the pan just started to smoke, I added the peppers, letting the skins blister for about three minutes so that the skin was nice and brown before flipping them over for another two. (You don’t want to cook them through, just blister the skin enough to tenderize them and add flavor.) 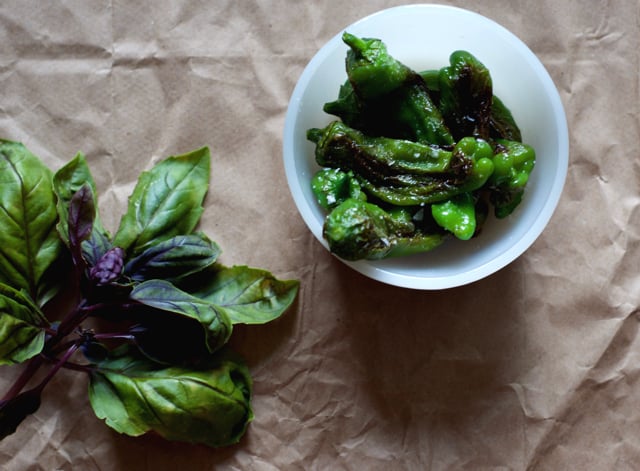 I put a little pot of brine on to boil, packed my jars, topped them off, and processed them for 10 minutes. Of course, I kept a few of the cooked peppers to snack on while my the canner bubbled away.

The next day, I opened one jar to find out if my experiment had worked. The aroma when I popped the lid was amazing — and while the peppers are a little softer than they would be fresh out of the pan, that smoky flavor I crave was there, plus lots of zing from the aromatics and vinegar.

These peppers would be amazing on an antipasti board, served alongside a rugged sharp cheddar or savory Manchego, or on a sandwich loaded with cold cuts and crisp lettuce. Or, as is my preference, all for me and straight out of the jar.