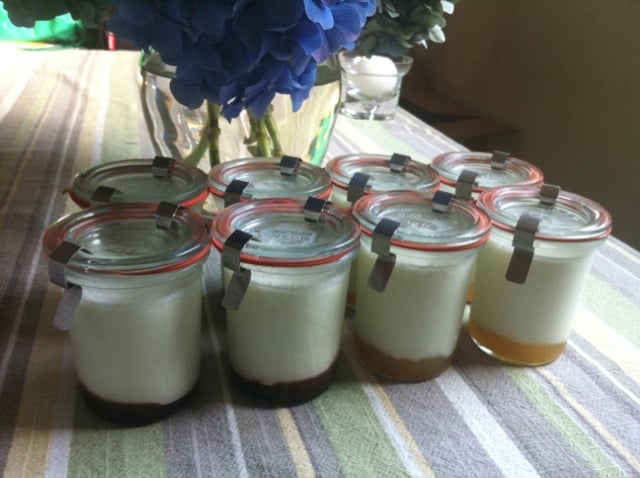 We’ve got our first Open Jars guest post today. This one comes from Paige from Oregon (she doesn’t have a blog, but you can follow her on Twitter here). A couple of months ago, she emailed me to ask my opinion on making fruit-on-the-bottom yogurt. I had to claim ignorance on the matter, as at heart I’m essentially a lazy cook, who simply scoops yogurt and jam together and stirs until combined. But I asked that if she decided to tackle the project that she tell me how it turned out. Well, she had great success (and used adorable Weck jars to boot). Here’s what Paige had to say.

I did it, and it worked great! After thinking about it a lot, I found myself making plain yogurt without enough time to make anything else, but remembered some half-full jars of jam in the refrigerator. I heated some strawberry-rhubarb and strawberry together, then some pear spice in a separate container until bubbly.

Then I spooned a tablespoon of jam into the bottom of a boiled jar and let cool maybe an hour. When the milk was ready, I added 1/2 cup per jar. I used a regular funnel (not a canning funnel) and kind of aimed it at the side of the jar and the jam wasn’t disturbed at all! The milk thickened up perfectly and I tried one and think the 1:8 ratio of jam to yogurt is just about perfect.

Interestingly, the 8 hours at 105 degrees made the jars seal! I’m not going to take the clips off, though, because I fear they would unseal at room temperature.

Thanks so much, Paige!

Also, thanks to all of you who entered the giveaway for Shae’s book earlier this week. There were 249 entries across the blog and Facebook and the winner is #46, the Windy City Vegan.

Update: No, homemade yogurt is not stored at room temperature. Paige was simply commenting on the fact that the jars created a seal thanks to the gentle heating period that the yogurt needs to set. Yogurt must be kept in the refrigerator. I have not done a post on homemade yogurt, but I’m planning to soon (I know, I’ve said that before. This time I mean it). However, if you’re anxious to get started, my process is very much like the one that The Frugal Girl details here.

Also, when Paige refers to the milk, she actually means the scalded milk that has been cooled and mixed with the yogurt starter. She didn’t tell me how she incubates her yogurt, but I do mine in a cooler filled with water that’s been warmed to approximately 190 degrees. The cooler keeps the heat of the water well contained and allows the yogurt a chance to set nicely.

33 thoughts on "Open Jars: Homemade Fruit on the Bottom Yogurt"