Regular Food in Jars contributor Alex Jones is here today with her contribution for the April Mastery Challenge. This month, she quick pickles some gorgeous local mushrooms from Primordia Farm! Take it away, Alex! 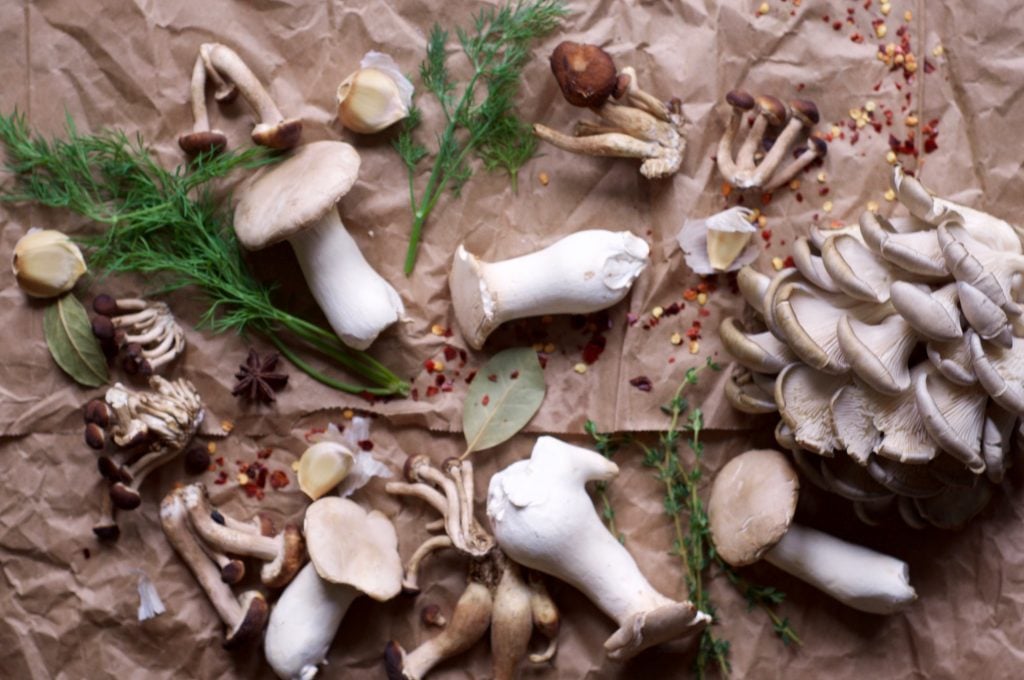 Just about every Saturday, I wake up early and walk a few blocks from my West Philly apartment to Clark Park, where I’ll meet a truck laden with cheese and mushrooms from Berks County. We’ll set up folding tables and tents on the sidewalk along with organic vegetable growers, kraut makers, fishermen, orchardists, urban farmers, and bakers who are there to vend at the farmers’ market.

On one side of our stand, I sell grass fed artisan cheese, yogurt, and cultured butter for Valley Milkhouse, a microdairy located less than 90 minutes from Philly that’s run by my friend Stefanie Angstadt. On the other side, my neighbor Bianca sells wild foraged and organically grown mushrooms for the other Berks-based business, Lenhartsville’s Primordia Farm. In addition to providing an efficient logistics partnership for the two farms, we and our farmers’ market customers find that our products go really well together.

The proximity to Primordia’s offerings has given me the chance to experiment with the kind of fungi that never used to cross my radar. I get to bring home feathery maitake mushrooms to roast up crisp and toasty, king trumpets to slice into planks and saute until golden brown, and—when they’re in season—black trumpets, chanterelles, and morels to flavor creamy pasta sauces and risottos or simply cook gently in a good amount of butter.

If you’ve got a good source for fresh, organically grown mushrooms in your area but haven’t tried cooking with them yet, I highly recommend it. Varieties like these and others, like furry-looking lion’s mane, delicate golden oyster, and tiny, compact enoki, are sometimes labeled “exotic” or “wild” and can come with eyebrow-raising price tags, ranging anywhere from $10 to $40 (for morels in season) per pound. 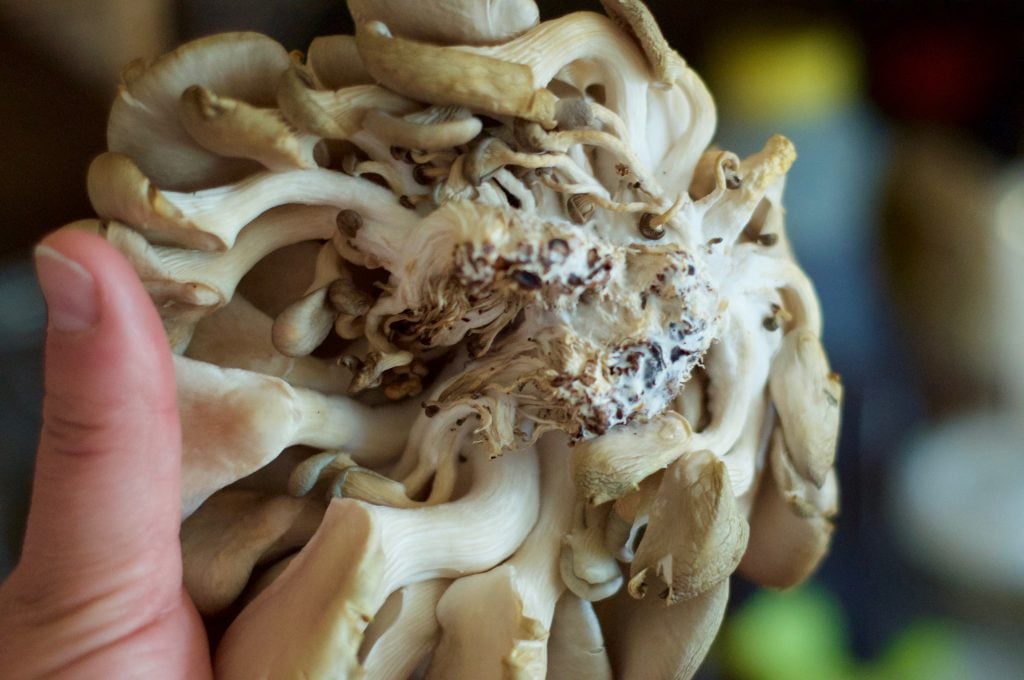 But mushrooms are very light, and the amount you need to make even a mushroom-centric dish or preserve is probably much less than you think. The mushrooms for this recipe cost around $8. By bringing some home from the farmers’ market, you’ll also be supporting a small, sustainable business like Primordia and adding something nutritious and delicious to your diet.

(The specimens in the top photo sat bagged in my crisper for nearly a week before I could process them, hence a few dings and broken pieces, but trust that Primordia’s and any good grower’s mushrooms will be immaculate at purchase.)

As much as I’ve come to love mushrooms, I’d never pickled them after a tendency to be disappointed by the marinated buttons on most antipasti platters. Quick-pickling some beautiful mushrooms would be perfect subject for April’s Mastery Challenge.

After a little Internet research, I decided on this Andrew Zimmern recipe, modeled on Russian pickled mushrooms, as a guide. Along with the garlic, red pepper, dill, and thyme that he recommends, I swapped in star anise for cloves and black pepper.

And while Zimmern makes the impossible (at least where I live) recommendation to combine spring morels and summertime chanterelles in his recipe, neither were available locally—so I grabbed a mix of shapely king trumpet, velvety pioppino, and gray oyster. 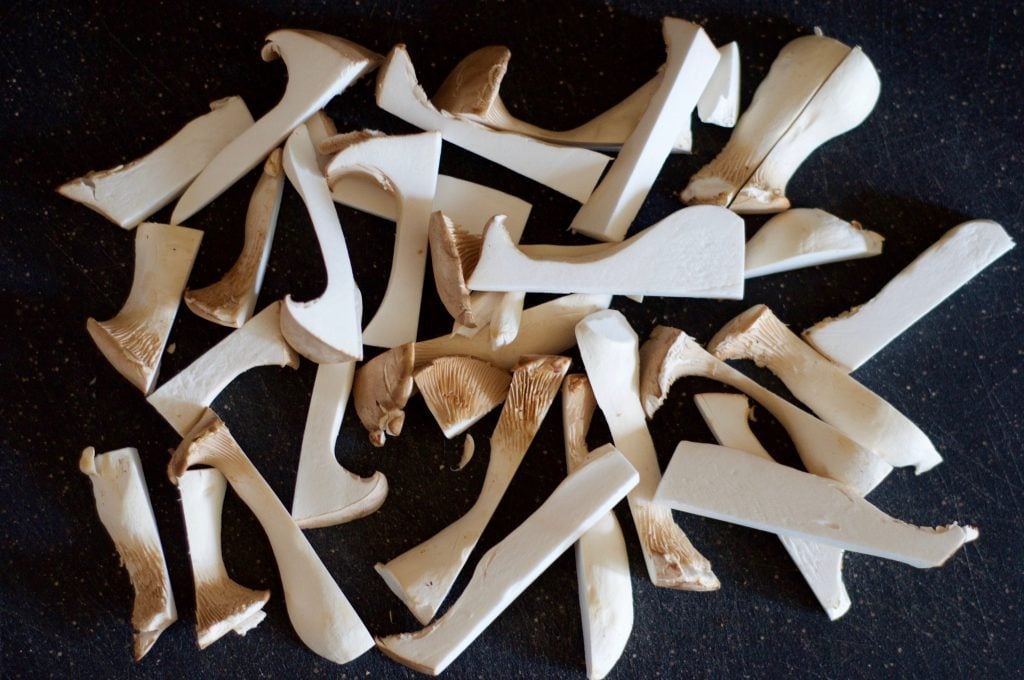 The pickling process is a simple one. Check mushrooms for soil or debris—Primordia’s are so clean that you don’t have to wash them—and trim off any substrate, typically a nutrient-rich mix of straw or sawdust, coffee grounds, and mycelium out of which the fruiting bodies emerge.

Separate mushrooms like pioppino and oyster into smaller pieces and cut large, fleshy king trumpets into manageable sticks or planks.

Next, measure out water, apple cider vinegar, sugar, and pickling salt and put it in a pot to boil. Since this is a quick pickle that will be refrigerated, and I’m not a fan of overly sweet pickles, I cut the sugar down from ⅓ cup to one tablespoon, the same as the amount of salt called for in the recipe.

While you’re waiting for the brine to boil, get your jars ready by dividing the herbs, spices, and garlic between two wide-mouth pint jars. 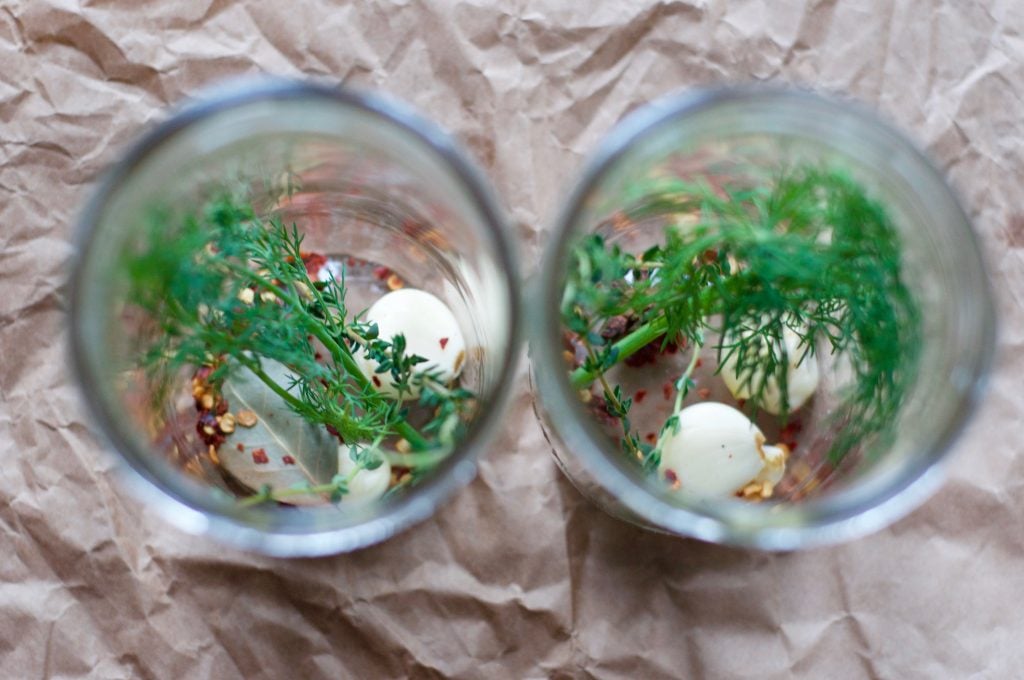 Once the brine came to a boil, I added the king trumpets and pioppinos, boiled for one minute, and scooped them out with a slotted spoon and into the prepared jar. Then, I topped them with hot brine and repeated the process with the oyster mushrooms, which went into their own jar.

After the pickles had cooled but before they went into the fridge to cure overnight, I sampled a stem. The pickles weren’t too sweet or salty, but pleasantly tangy and well-seasoned, with a tender texture. They took mere minutes to make and already tasted delicious.

One note on pickling mushrooms: I gauged what size jar I would need the same way I would if I were pickling carrot sticks or asparagus spears—by packing a jar with the raw product to see what might fit.

Based on this, I started the recipe with 24-ounce straight-sided jars. But after that minute in the boiling brine, even the firm trumpet mushrooms had shrunk a bit and were flexible enough so that they only filled a wide-mouth pint, so I transferred them into the smaller size. 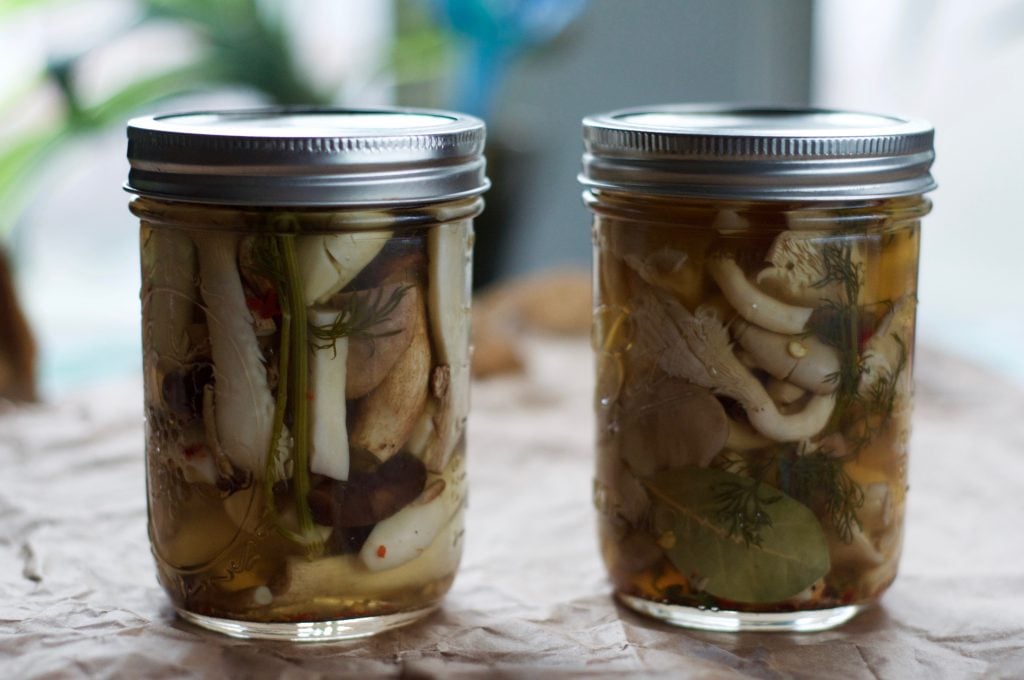 Also, I’ve seen some recipes that call for the mushrooms to be cooked for eight to 10 minutes, which seems like overkill to me. A minute in the boiling brine plus an hour or two of heat as the jars cool should be enough to lightly cook the mushrooms and, as long as you cut large specimens thinly enough, allow the flavors to penetrate all the way through without getting soggy.

As soon as local morels arrive this spring—which should be any week now—I plan to pickle a few pints to savor in salads and pasta and with cheeses all summer long.

Do you love mushrooms? Have you tried pickling your own, whether exotic or everyday? Share your tips for a great mushroom pickle in the comments! 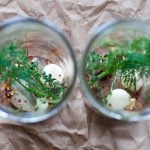